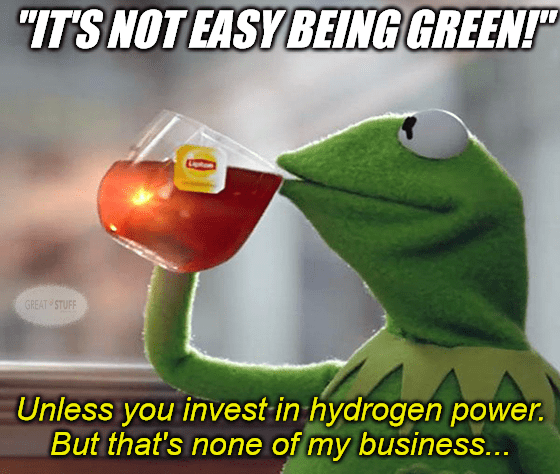 Shell Be Comin’ ‘Round The Mountain…

Great Ones, my best friend’s sister’s boyfriend’s brother’s girlfriend heard from this guy who knows this kid who’s going with a girl who saw that Shell PLC (NYSE: SHEL) is building the “largest” green hydrogen plant in the world.

You’re darn right it is!

I’ve been telling y’all for the better part of the past two years that hydrogen power is the future of green energy. When I first started out, y’all thought I was crazy and sent me Hindenburg memes and talked about how “green hydrogen” was a pipe dream that would never ever happen.

And then … the dominoes started falling.

First it was hydrogen-powered semitrucks … because electric batteries have temperature and fast-charging issues that just don’t jive with long-haul truckers.

Then it was airplanes … because batteries are way too freaking heavy for flight. Also, you thought you had range anxiety on the ground? Ha! Try worrying about range at 40,000 feet.

Then it was lift trucks and forklifts at warehouses … because it’s faster to fill up with hydrogen than it is to plug into an electrical socket and wait for hours.

In response to this rapid growth in hydrogen power demand, Great Stuff Picks holding Plug Power (Nasdaq: PLUG) announced it was building a green hydrogen production hub that will bring some 12,500 tons of liquid green hydrogen to market every year!

Not to be outdone, U.K.-based BP PLC (NYSE: BP) bought a 40.5% stake in the Asian Renewable Energy Hub (AREH) in Western Australia. This massive 6,500 square kilometer facility will produce 1.6 million tons of green hydrogen every year when it goes online in 2029.

But I’m betting some of y’all still aren’t convinced that green hydrogen is the real deal. I can hear you now…

Plug Power is a fad. It’s not a real energy company.

BP is just one energy company. No one else big is chasing hydrogen!

Yes, I’ve read all of this and more in the Great Stuff email inbox from y’all.

Now, I know BP is “small” by energy industry standards. And maybe a $96 billion company is just too little for y’all to take seriously.

Well, how about a $183 billion company that’s also a major NASCAR sponsor?

Is that big and ‘Murican enough for you to take hydrogen seriously yet?

It’s clear that, due to European regulations, Shell must become a net-zero emissions business by 2050. The company has pledged to do so and doubled down on that promise today. Shell announced that it will build a 200-megawatt electrolyzer in the Port of Rotterdam — Europe’s biggest port.

However, Shell’s plant will begin operations in 2025, a full four years ahead of BP’s.

Oh, yeah? Where’s that electricity coming from Mr. Great Stuff? I bet it’s coal! This isn’t green! It will never be green!

My dudes, Shell’s green hydrogen production plant will be powered entirely by the 759-megawatt Hollandse Kust offshore wind farm. It’s all green all the way down, my man. 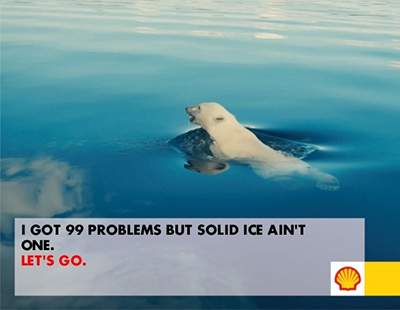 Now, I don’t particularly like Shell as an investment idea … let alone a green hydrogen investment idea. The company is still dragging its feet on the green energy revolution.

Personally, I’d prefer BP if we’re looking at former “oil majors” as a way into the hydrogen market.

But the real plays in hydrogen remain Plug Power and Hyzon Motors (Nasdaq: HYZN) — yes, I know HYZN is getting the crap kicked out of it right now.

Y’all can bail anytime you want, but I’m still holding. This company has a very bright future.

That said, I know that right now is not a good time to go speculating on growth stocks around the market … especially if you’re close to or in retirement.

So for those that are a little more risk averse — and who isn’t right now? — I’ve got something special for you…

If you’re not ready to go whole-hog on hydrogen right this very second … you should at least be buying up the best battery-makers. Remember, the transition to renewables like hydrogen is gradual, so building better batteries is where many automakers are at right now.

You know how we keep saying the No. 1 problem preventing the mass adoption of electric vehicles is cost? The tipping point — affordability — may finally be arriving, thanks to this brand-new battery technology.

It’s about to cut the cost of EV batteries IN HALF … meaning by next year, an electric vehicle is expected to cost the same as a gas-powered car.

Oooh, ahhh! Look at the sky!

Sure, if you were already planning on dropping half a mil’ to go to space with Sir Richard Branson. What, you thought we were doing a spaceflight giveaway or something? (I wish we were — that sounds amazing.)

See, Virgin Galactic (NYSE: SPCE) — or as I call it, the Branson Bunch — just signed a contract with Boeing (NYSE: BA) subsidiary Aurora Flight Sciences. Jeez, that was a mouthful.

The duo is set to build a new space carrier for Virgin’s spaceflights. After all, if Branson’s wanting to send up hundreds of space-tourist flights every single year, you’re gonna need quite a few space carriers to do it.

But what exactly is a space carrier, you might ask? It’s a plane, yes … but not just any plane! Instead of launching a rocket straight from the ground into orbit, Virgin Galactic flies to space on a technicality (kinda like everything else Virgin does).

It uses a carrier plane that — get this — carries the spacecraft up to altitude, before the spaceship disconnects from the mother ship and blasts off in to space, to put it super technically. Now you can see where Boeing enters the picture — you know, the company that built the OG Shuttle Carrier Aircraft for NASA?

Editor’s Note: Legend Who Made His Fortune In 2008 Says: “Do THIS Now”

While most investors were losing their shirts during the financial crisis of 2008, Andrew Keene knew that he had to be different if he was going to see big profits on the Chicago trading floor.

That’s when he discovered a unique “wiretapping blueprint” that allowed him to see where the “big money insiders” were investing … BEFORE the stock made its big move.

With an all-out economic recession already at our front door … Andrew believes his unique strategy is the perfect way for the average American to make money in this bear market.

A long, long time ago, in a stock market far away …

Retail traders were under an attack. And I thought me and WallStreetBets could talk the other traders into maybe cutting them a little slack. But Robinhood’s response — it didn’t thrill us. They locked the doors and tried to kill us…

GME escaped from that gas then met AMC and crypto. We took some gains from the scene and we went to Reddit to see the memes. We all wound up on Yahoo Finance. That’s where … we found … this stock split…

Oh my, my, this here meme-stock guy —

Alright, let me stop you right there and parse this out. So there’s GameStop, memes and a stock split. What gives?

Well, the situation is pretty much as it says on the tin: GameStop (NYSE: GME) just announced a four-for-one stock split in an attempt to lure in more retail investors (read: meme traders).

Now, as you know, a stock split doesn’t have any material impact on a company’s fundamentals. You’re just cutting up the same pizza into different slices. But some folks like different-sized slices of that stock market pizza. Some investors like being able to buy a ton of reeeeally small slivers. Some people like one big hunk of pizza in their portfolio.

Nothing’s actually changed but the price tag, but it is what it is. GameStop wants to get more retail traders buying the stock, so hey, if the cost per share is a lower number on Robinhood, that means you can buy in with less money … right?

Whatever appealed to meme traders today, it worked: GME perked up 10% on the news as investors piled into the stock ahead of the split, which I’m sure short sellers loved to see.

Still, the overall stock split shouldn’t hurt the shorts too too bad. And I still see this move as GameStop’s leadership fleecing meme stock traders. But, let’s face it, they aren’t ready for that conversation yet.

The Wheels … Fell Off?

Design lead of Toyota (NYSE: TM), thanks for coming in and talking with us. Now, this electric SUV that was involved in the incident on I-95 this week…

Yeah, the one where the wheels fell off?

That’s not very typical, I’d like to make that point.

Well, how is it atypical?

Well, there are a lot of these electric SUVs driving around the world all the time and very seldom does anything like this happen… I just don’t want people thinking that all EVs aren’t safe.

Was this EV safe?

Well, I was thinking more about the other ones … the ones where the wheels don’t fall off.

Well, if this wasn’t safe, why did you sell thousands of these electric bZ4Xs around the world?

I’m not saying they’re not safe, just perhaps not quite as safe as some of the other EVs. Some of them are built so the wheels don’t fall off at all.

Wasn’t this built so the wheels wouldn’t fall off?

I’m afraid we’re out of time.

As you can probably gather, Toyota’s recalling thousands of bZ4X electric SUVs because after “low-mileage use,” all of the wheel’s hub bolts can loosen enough so the wheel fully detaches from the car. Like … while you’re driving.

Toyota also adds that “if a wheel detaches from the vehicle while driving, it could result in a loss of vehicle control, increasing the risk of a crash.” Thank you, Captain Obvious.

Keep in mind, this car just came out last month. Seriously, if you’re trying to come up and beat Tesla (Nasdaq: TSLA) or BYD (OTC: BYDDY) in the EV market … this is not how you do it.

What do you think about Toyota’s recalls? Will green hydrogen turn the renewable energy tides? And how about them *checks notes* space carrier planes?

GreatStuffToday@BanyanHill.com is where you can sound off, simmer down and reattach your wheels … if you’re driving a Toyota, that is. If you’ve got an opinion, we want to hear about it! So go ahead and drop us a line. 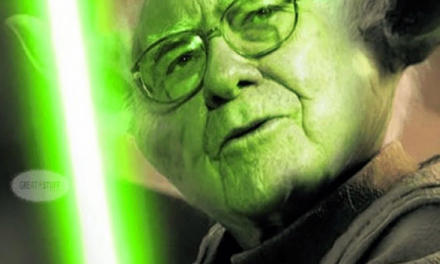 Tesla Topples, Ford Focuses & What A Load Of Croc 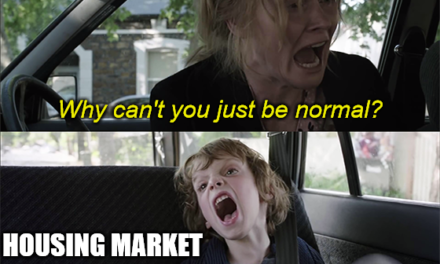