At our Total Wealth Symposium conference two weeks ago, the main question I got was: Where do I see the market headed in the next few months?

It’s one of those questions you need a crystal ball for, because the truth is, no one knows.

We have an idea, and we follow our indicators and other tools to help us gauge where the market is heading. But in the end, it’s an answer that changes from day to day.

One of the tools I use is a calendar based on an 18.5-year cycle.

The calendar dates back to 1784 and has identified major bear and bull markets, as well as shorter-term market panics and stock market rallies.

And 2017 is a year where, according to the calendar, market panics are likely.

But here we are, starting the 10th month of the year, and there hasn’t been any.

However, the year’s not over yet. And the most likely time for market panics is over the next 30 days…

A Pattern of Pullbacks

The calendar identifies each year with a letter.

For example, in 2007 to 2008 the calendar called for extreme low prices, and it expected a new stock market cycle to begin after that, which would lead to several years of rising prices. Just like the calendar predicted, the market bottomed in March of 2009 and rose rapidly for several years.

The year 2017 is annotated by the letter F, which means stock market panics are likely.

So, in April, I went back and showed you how each year that ended with an F stacked up since 1900.

Take a look at this chart of the previous years marked with an F and the max drawdown during those years (from highs to lows): 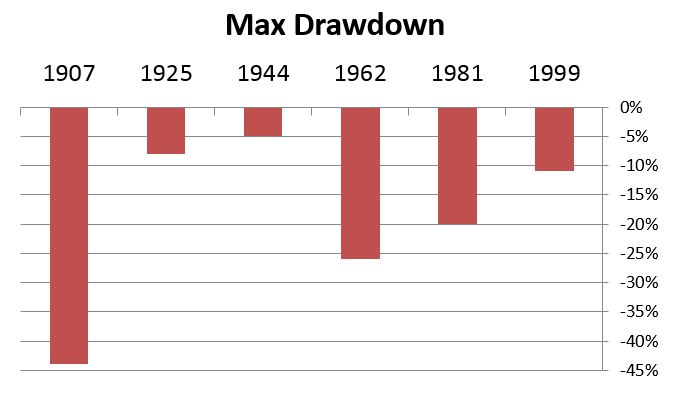 According to data based on the Dow Jones Industrial Average, each of those years suffered at least a 5% pullback.

So far in 2017, the max drawdown (the difference from the highs and lows this year) is about 3%.

Does that mean this year will not have a 5% correction? I don’t know yet.

But what I do know is that if we are to see one, the month of October is the most likely time it will occur. Here’s why…

The Most Volatile Month

Going back over 100 years, October is a historically volatile month. It’s actually the most volatile, with a standard deviation (a measure of volatility) of 1.44%. The average of all 12 months is just 1.08%.

You can attribute the reasons for October being the most volatile to many historic drops, crashes and downright panics occurring during the month.

With the 18.5-year cycle calling for at least a 5% correction this year, October poses the best opportunity for that.

I’ll continue to follow the markets closely. Even though this calendar is accurate overall, precise dates are off, and the panics could be up to a year from today. So even if we survive 2017 without a panic, we are not in the clear yet — a panic is still likely.

The good news is that this will be just a correction. The calendar doesn’t call for an all-out bear market until we get into the 2020s.

Fearless Main Street Investors Are About to Be Stunned

The ETF Bubble Will Change The Stock Market Forever