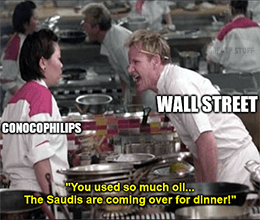 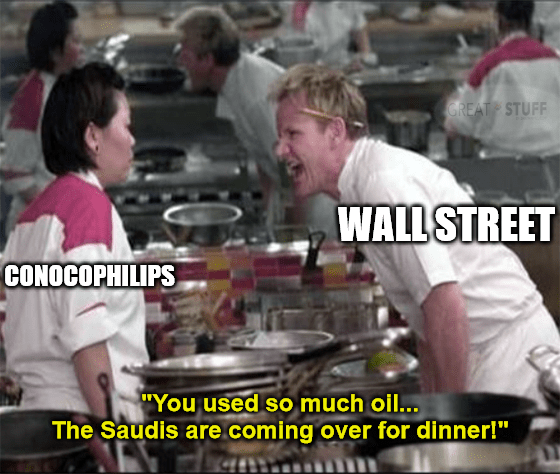 A Tale Of 2 Energy Companies

Great Ones, I have a tale of two energy strategies today … one rooted deep underground, the other firmly focused on the stars.

What are you today, the Cheshire Cat? Get to the point, man!

For those who don’t know, the Permian Basin is a 225,000 acre, oil-rich area of Texas with more than 600 miles of crude oil, natural gas and pipeline infrastructure already in place.

In fact, the Permian Basin is responsible for about 20% of all U.S. crude oil production.

With all that oil, you can see why ConocoPhilips is invading … erm, buying Shell’s assets in the area. And at just $9.5 billion … that’s quite a steal.

But why would Shell sell?

Stop that, you’ll get stuck in a loop.

Anywho, Royal Dutch Shell is a European energy company based in the Netherlands. If you’ve kept up with alternative energy news — and if you read Great Stuff, you should be — you’ll know that Europe is set to all but ban oil in the next 10 to 15 years.

As I’ve said before, oil is dying. Sure, there are some short-term opportunities where investors can make plenty of money during the transition away from oil, but the writing is on the wall.

Both ConocoPhilips and Royal Dutch Shell know it … and there are really only two ways to deal with the coming collapse of oil: Buy up as much as you can so you can be the biggest niche provider and survive, or ditch as much oil property as you can and use the proceeds to move into greener pastures.

Being from the EU, Shell really only has the latter “ditch oil” option if it wants to stay compliant for all of its customers under European law.

Being from the U.S., ConocoPhilips could take either route … but with oil fields coming on the market for nearly pennies on the dollar, how could it refuse this Permian Basin deal? In for a fracking penny, in for a fracking pound … right?

And therein lies the choice investors will need to make. Do you side with ConocoPhilips and corner as much of the oil market as you can? Or do you side with Royal Dutch Shell and sell as much oil property as you can with an eye toward alternative energies?

Wall Street appears to have sided with Shell, as RDS-A stock was up nearly 4% today, while COP stock gained a mere 1.5%.

You likely know where I stand … cough hydrogen cough … but where do you stand, Great Ones?

Editor’s Note: The Electric Vehicle Story No One Is Talking About (Yet…)

Without this strange material, the entire $700 billion electric vehicle (EV) revolution may never happen. There’s only one company in the entire Western Hemisphere that supplies this critical material on such a large scale. And as EVs take over roadways all across America … they will rely on this material for future success.

There’s only one company in the entire Western Hemisphere that supplies this critical material on such a large scale. Picking up shares of this one company today could be the best investment decision you make in your entire life. 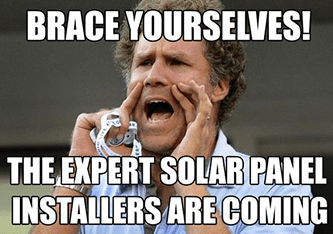 While some U.S. energy fiends are hog happy to keep digging our oil-and-gas reliance deeper … I say we talk about solar for a change of pace. Wall Street was snack-ish for solar stocks today, too, with KeyBanc analysts starting coverage on Enphase Energy (Nasdaq: ENPH) at overweight and a $179 price target.

Enphase Energy is an all-in-one consumer-focused solar company. And to KeyBanc, the company has a solid base business and growing opportunities … which is to say that, finally, some solar funding is headed toward parched and sun-dried solar stocks like Enphase and First Solar (Nasdaq: FSLR). Plus, Enphase’s residential business ain’t too shabby, either — especially since Enphase is expanding its energy-storage offerings.

Not every analyst is feeling the optimistic love today, however. Piper Sandler downgraded Big Lots (NYSE: BIG) from overweight to neutral, bumping its price target from $60 to $50 on fears the waning fiscal stimulus will take the wind out of Big Lots’ sales.

Hang on a minute … if analysts are worried about stimulus running out, why aren’t they downgrading every retailer? What makes Big Lots special?

That’s it: Nothing. Nothing makes Big Lots special.

Anything Big Lots does, other stores do better or cheaper. If I want slightly out-of-date snacks, I’ll keep rummaging ‘round the back of the pantry. (I swear there was one more bag of M&Ms. Hmmph.) And no amount of Laugh, Love, Live signs will save the retailer. In fact, I can only give Big Lots points for its black-and-orange theming … and only because it reminds me of Great Stuff.

Insane In The Entain 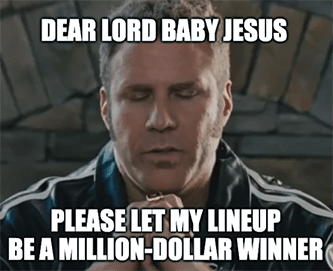 If you thought DraftKings’ $1.56 billion Golden Nugget buyout was a gamble, just wait until you see the sports-betting company’s next big wager. DraftKings (Nasdaq: DKNG) just plopped down $20 billion in stock and cash for U.K. online sports bettor Entain.

Sure DraftKings already operates in the U.K., but what’s a little more expansion for good measure? Gobbling up more sports-gambling market share is a sure bet.

Entain currently has a sports-betting hookup stateside through MGM, which, for its part, offered $11 billion to buy out Entain. If you’ve never heard of “BetMGM” before, well, that’s another big reason why Entain went with DraftKings’ bid instead.

What An Uber Tease

How many times will Uber dangle profitability over Wall Street’s head? One more time, it seems. The company revised its third-quarter outlook, raising gross bookings predictions to between $22.8 billion and $23.2 billion. Nevermind that the forecast was lowered from its previous higher range of $24 billion, it’s time for CEO Khosrowshahi to wax poetic:

They say that crisis breeds opportunity, and that’s certainly been true of Uber during the last 18 months.

Personally? You know I’ve never been an über Uber fan. And if I were an UBER investor, I’d sure wish Uber would stick its quotations book where its profit-losing mouth is. If these crises bred so much of an opportunity for the past 18 months, why is it only now that Uber’s capitalizing on those opportunities enough to even tease profitability?

Uber’s still wishy-washy on the earnings expectations front, now predicting EBITDA will come in between a loss of $25 million and a $25 million profit. Before that, Uber only expected third-quarter EBITDA to come in above a loss of $100 million.

Maybe we’ll all get lucky, and Uber will hit right down the middle, like playing baseball with an ax — a big fat $0, neither a profit nor a loss. Where can I bet on that?

Siri, Is Life All A Big Nothing? 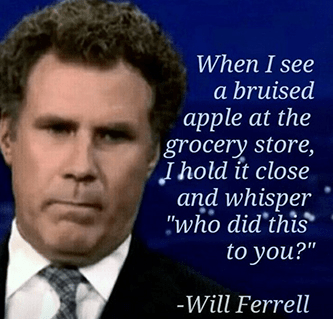 No longer satisfied with monitoring your physical health, Apple (Nasdaq: AAPL) wants to get extra personal and all up in your mental health. The company is now working on tech that watches your mobility, physical activity, sleep patterns, typing behavior and more to help diagnose depression and cognitive decline.

I can see it now … millions of iPhones with depression indicators spontaneously bursting into flames immediately after Millennials buy them. I thought Netflix was already working on this tech, considering how many times it wants me to confirm that, yes, I am still watching the same flippin’ show … just shuddup and keep playing before the thoughts of reality come back.

Anyway … in all seriousness, I do appreciate that Apple cares (or wants to appear like it cares) about mental health, especially in the wake of Facebook’s not-so-surprising findings on device reliance, social media and depression.

But as with anything to do with mental health, meaningful change is all about the implementation.

In other words, will Apple have little notifications pop up that tell you to take a break from social media, or are they just going to give me more ads for Better Help than I already get? Can an iPhone tell you to go see a therapist specifically because you show X, Y, Z symptoms … or will it just give you hippy-dippy messages of positive affirmations in the morning?

Let me know when my iWatch injects Zoloft right into the bloodstream. Then we’ll be cooking with gas…

Great Stuff stoners are in for a real treat this week — the kind of incredible edible that sends you hunting for a package of Double Stuf Oreos at 2 o’clock in the morning.

Our Quote of the Week comes from the king of the Amazon (Nasdaq: AMZN) itself … or at least one of its many henchmen. For those who might’ve missed it, Amazon issued a statement this morning saying that it will further relax its screening policies for applicants who use marijuana:

Amazon’s pace of growth means that we are always looking to hire great new team members, and we’ve found that eliminating pre-employment testing for cannabis allows us to expand our applicant pool.

Not only is Amazon turning a blind eye to current cannabis use, but it’s also reinstating employment eligibility for applicants who were previously dismissed for having marijuana in their systems.

This isn’t the first time that Amazon stood up for marijuana-using miscreants.

Back in June, the company decided to scrap cannabis screenings for all job applicants who weren’t going to operate heavy machinery (think trucks, forklifts and really anything else on wheels).

At the same time, Amazon publicly backed the Marijuana Opportunity Reinvestment and Expungement (MORE) Act — a bill that calls for cannabis to be decriminalized and removed from the government’s list of controlled substances. 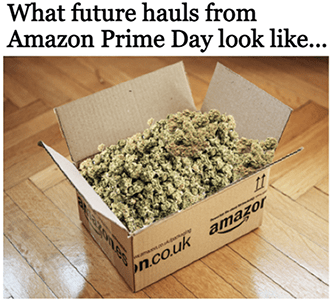 All of this was designed to help Amazon in its mission to become the “Earth’s best employer” — their words, not mine — and bring a wave of new job applicants out of the woodwork in an increasingly tight U.S. labor market.

You know, the same labor market that added less than half of the expected 720,000 jobs to the U.S. economy back in August? Yeah, that one…

Clearly, Amazon sees what other businesses across the U.S. stubbornly refuse to admit: The Times They Are A-Changin’. Gone are the good ol’ days when employees would take whatever gig was handed to them … or whatever job didn’t ask them to pass a drug test.

Now employees are demanding more pay, better benefits and a more agreeable working environment … including the freedom to smoke a doobie in their downtime. It’s the little things, ya know?

Setting aside all my recent issues with Big Tech companies, I’ve got to hand it to Amazon for stepping out of the dark ages on this one. Not only does the retail renegade understand how to attract future workers … but it’s also treating those workers like the adults that they are.

After all, there’s a big difference between being blazed on the job and getting high in your free time — and anyone who doesn’t understand the difference is going to find themselves out of a job with or without a drug screening.

Of course, Amazon is also acting out of its own self-interest here. The retail giant really wants to sell legal weed … and the day that marijuana becomes federally legalized is the day Amazon opens an online dispensary. I’m calling it now.

What say you, Great Ones? Would you let Amazon become your new budtender in a future, federally legalized utopia? Would you still drive over to your local Trulieve to ooh and ahh at those glittery, crystalline trichomes in person? Or would you go full-blown Jorge Cervantes and start cultivating your own buds next to the marigolds out back?

Tell me in the inbox: GreatStuffToday@BanyanHill.com. We’d love to hear from you! In the meantime, here’s where else you can find us: 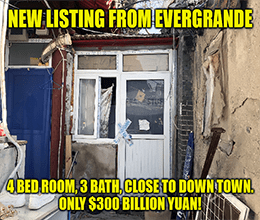 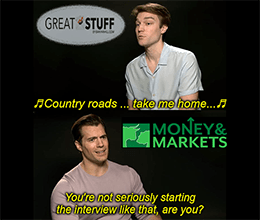