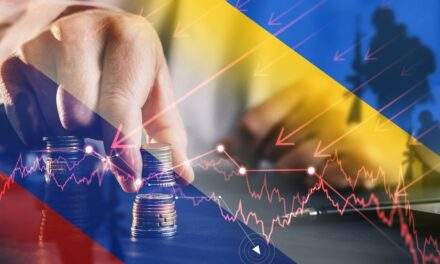 Europe has a gas problem.

The United States has one too.

But that’s a different kind of gas.

The difference is critical … and potentially very profitable for you.

Here in the U.S., the price of gas — the kind we put in our cars — is through the roof. The more people spend on getting around, the less they have for other things. If prices stay high, we can expect a recession.

Like us, Europeans are experiencing high petroleum prices. But they’re also facing serious shortages of natural gas, which they use to heat their homes, cook their food and run their factories.

If Vladimir Putin were to stop Russian natural gas shipments to Europe, where winter temperatures regularly dip below freezing, it would be more than inconvenient. It would be deadly.

To avoid this potential catastrophe, global energy markets are embarking on one of the most consequential shifts in their history.

And if you get on the right side of it, you can make a lot of money…

How Natural Gas Gets to Europe

In recent years, Russia has supplied more than 40% of total imports. Which raises a critical question: If Russia cuts off supply, what can make it up?

The answer depends on geography. Northwestern Europe gets most of its natural gas from nearby Norway and the North Sea. In southern Europe, 40% comes from Algeria and Azerbaijan; a little over 20% from Russia. But countries closest to Russia, such as the Baltic and the Balkans, import anywhere from 70% to 100% of their natural gas from Putinland: 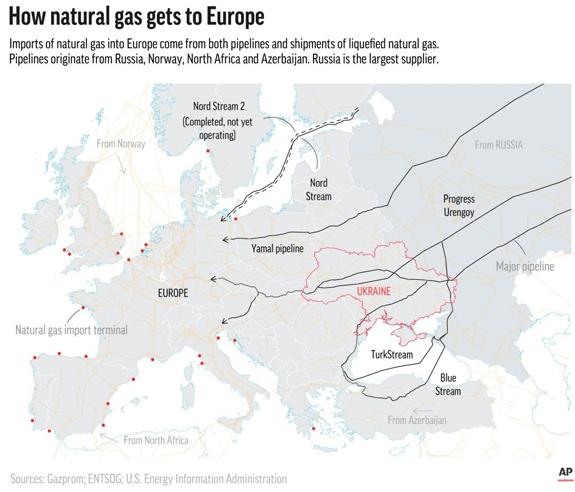 But the map above shows the seeds of an alternative.

Those little red dots on the western European and Mediterranean coastlines are liquid natural gas (LNG) import terminals. Just like Russia’s pipelines, they connect to the European natural gas network.

The question on everyone’s mind is whether those little red dots can make up for falling Russian supply in time to prevent a catastrophic winter.

LNG to the Rescue?

Like oil (of which it is a byproduct), natural gas is often found thousands of miles from where it’s used.

When those sources are on the same landmass, pipelines are the preferred method of transport. They can even traverse short distances under the sea.

On the other hand, if you want to move natural gas halfway around the world — say, from Australia, Qatar or the U.S., all of which have huge reserves — you need a different method.

That’s where LNG comes in.

LNG is natural gas that’s been cooled to minus 260 degrees Fahrenheit, at which point it turns into a liquid. It’s then loaded aboard refrigerated ships that can transport it around the world.

When it gets to its destination, it’s gradually warmed up to turn it back into gas, at which point it can travel the same networks as natural gas.

The other problem is that 70% of LNG output is subject to long-term contracts. Most are with Asian countries. They’re unlikely to give up their LNG to help Europe.

The remaining 30% of global LNG trades on the spot market. That’s about 136 million tons of LNG available to the highest bidder. That’s more than enough LNG to make up for Russia’s supply, which is the equivalent of 118 million tons.

The question is, how high will European bidders go for that spot supply? And how can you play it?

The chart below shows historical European LNG imports tends. Imports in 2021 were close to the highest levels ever. Thanks to Russia’s invasion of Ukraine, imports this year have shattered all records, and are rising rapidly: 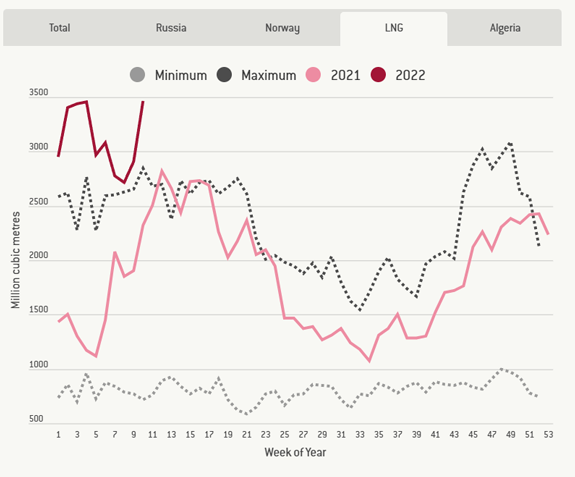 There are three challenges here.

Those are big investments, and they will take time. In the meantime, pricing pressure on the LNG spot market will be immense.

These are both leveraged funds. That makes them volatile. That means you must keep a close eye on natural gas prices and only hold them for short periods. But that has definitely been worth the effort this year. BOIL is up 61% year to date and UGAZF is up a whopping 75%.

On the other hand, the global LNG market will grow rapidly over the next decade or so.

Reducing reliance on the Russians is one thing, but the real driver will be its use as an interim fuel source while renewable energy supplies are built up. Analysts expect the global LNG market to grow at a compound annual growth rate of 6.92% during 2022 to 2027, which will more than double its value.

Notably, analysts expect that the biggest beneficiary of the growth of LNG trade globally will be the liquefaction sector … companies that turn natural gas into LNG for shipment. 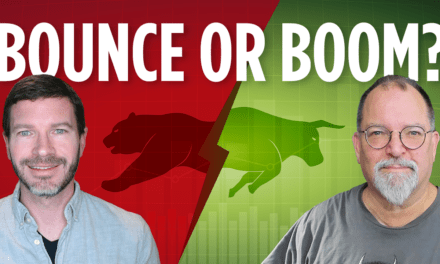 2 ETFs to Play the Bounce 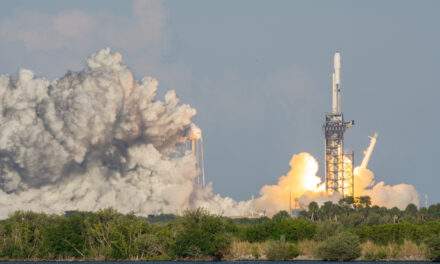