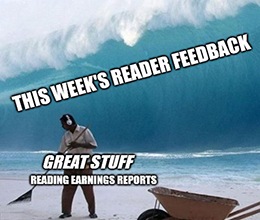 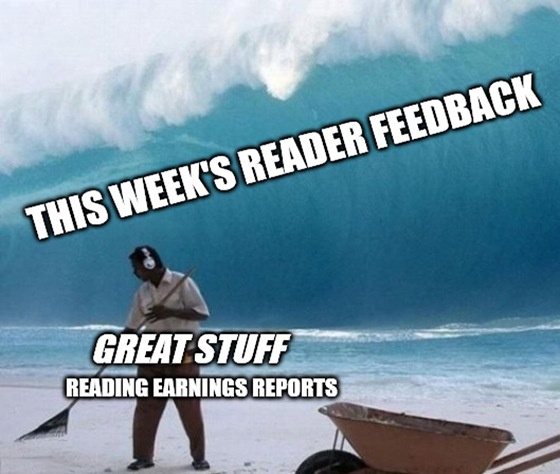 An Online State of Mind

You guys sure were talkative this week … some more so than others. But we’ll get to your emails in a bit. First, let’s look at the market today.

Initial weekly jobless claims hit 1.19 million in the U.S. last week, and stocks are … rallying? Oh, economists expected more, so it’s all good. Nothing to see here, I guess.

On second thought, let’s not look at the broad market. ‘Tis a silly place.

Instead, we’ll look at earnings reports from a pair of Great Stuff Picks recommendations:

I have to say, Roku is on fire. It’s taking full advantage of the pandemic and adding customers left and right. While advertising revenue is down — the dining, travel and tourism industries have cut back ad spending — Roku still beat Wall Street’s expectations handily.

When advertising finally comes back, the company will be in an even stronger position to push for higher sales. Great Stuff Picks readers already sit on a gain of 71.85% since our May 2019 recommendation, and we expect more gains down the road as Roku expands its dominance in the streaming market. Hold ROKU.

Wix.com is another company banging on the pandemic screen door. Millions are rushing online to create both personal and business websites to combat lower sales and foot traffic during the pandemic, and Wix.com is by far the easiest way to make that happen.

So, what about the loss? I’ll let Wix.com’s Chief Financial Officer Lior Shemesh take that one: “We want to be aggressive and to invest and it would be stupid not to do that, and to invest in marketing in order to support this demand.”

A company investing in itself during a period of opportunity? That’s music to my ears.

Wix.com’s loss wasn’t due to willy-nilly spending. It was due to the company reinvesting in itself and in growth. That’s a loss every investor should be able to get behind. It means the company believes in itself, its business model and its leadership.

Great Stuff Picks readers currently see an 89.6% gain on WIX since July 2019, and with the company reinvesting, there are certainly more gains to be had. Hold WIX.

Now, with the daily market niceties out of the way, let’s get right to answering your emails! (If you haven’t written in yet, drop us a line at GreatStuffToday@banyanhill.com. We don’t bite, I promise.)

Not into that whole “email” thing? Why not check out the one volatility-beating strategy we recommend? Seriously, it’s just one trade on the same ticker symbol week in and week out. Click here!

With each day fading together like a Groundhog Day-like haze … welcome to Reader Feedback day, formerly known as Thursday! Let’s cut to the chase here and check out the most important info of the week — straight from all you Great Ones out there.

These companies — Facebook, Google, Apple, Amazon and toss in Microsoft — are America’s crown jewels and should be celebrated, fostered, promoted by the government and any U.S. citizen. America is not good at too much, certainly not health care, and these companies represent our best, brightest, technological evolution and revolution in progress. Constraining them would most definitely destroy the best the United States excels and their intellectual properties must be protected, nurtured by our government. Biotech is the other industry where America as a nation excels.

Thank you for writing in, Adrienne! I appreciate the perspective. Personally, the Googles and the Apples of the world are far from the tech sector’s most-innovative companies (more on Apple in a sec).

I mean, just look at how Teladoc Health Inc. (NYSE: TDOC) revolutionized virtual doctor’s appointments even before the pandemic began. And that’s just one of many opportunities outside the Big Tech-walled garden. Keep reading Great Stuff, and we’ll eventually broaden your tech horizons.

It Is What It Is

Bye Joe. Where you going with that gun in your hand? My hopes. put one one in your own head. Your political views have soured me, so adios, MF. Watch your protest laden sports and claim your demy ticket for the polls. You’re toast. Post that on TikTok or Facebook, another commie group think controlled site.

I originally had a long-drawn-out response written on how I don’t let politics into my investing advice. But then I realized … I don’t care. Threats … over a free e-zine? Really? Come on, Gary. I know 10-year-olds with thicker skin. But, if you’re really leaving (please leave): 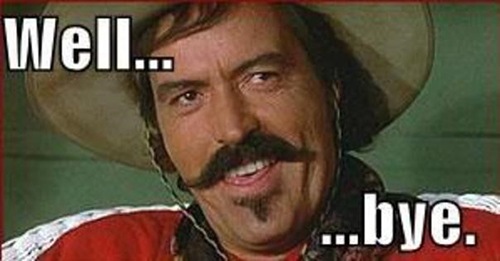 Melting Every Which Way but Up

You can repeat Steve’s mantra as often as you would like, but it will never stick. Things do not ‘melt’ up. Go light a candle, sit an ice cube on the counter, or leave an ice cream cake in your back seat on a summer’s day, you’ll learn what it means to ‘melt.’

I get his point about the market exuberance, but the term “melt-up” never made any sense, and it never will. You can try to redefine the term “tall” by using it to describe my 5’9” frame, but it will never make any sense to anyone. What happens in markets that Steve describes are run-ups. They have been happening in markets since long before the Dow was even a ‘thing.’ They weren’t ‘melting’ then, and they’re not ‘melting’ now.

Many of my friends subscribe to the various newsletters from Banyan Hill, among others, and the most comical thing among us when we sit on ‘boys night’ over Scotch and cigars is jokes around the silly term ‘melt-up.’ So if nothing else, we have been provided entertainment by the thousands of vain attempts to make this term a ‘real’ thing. This pointless English usage, and childless dig aside, thank you for the work that you do, I have learned much over the years.

Pedantry aside, “melt up” is just a term used to describe excessive bullish market sentiment … or “irrational exuberance,” if you will. Besides, if you want to get into the illogical art of investing expressions, we should start with the iron butterfly, Valium picnics, straddles and spreads or (bleh) stagflation.

Second, “run-up” wouldn’t pan out by the same logic. I probably run like someone from the Ministry of Silly Walks, but I’ve never ran up. I’m not Spider Man … or the Flash. I have “run up” a bar tab or two, which makes sense in the same metaphorical way that gives us melt ups.

Third, scotch over bourbon? How dare you, sir!

What will the market do with an Apple Split? So much potential yet so much hype.If ever a case could be made for a perfect buy and hold position, this is it. Pretend a fast forward and share the best Apple Pie ever!

Now that Apple will split four for one I will Force myself to buy four times as many shares and hold longer to see what bakes in. Keep up the good work.

Hey Bruce! After the overnight success and devastation we saw in biotech this year, I don’t doubt anyone second-guessing market hype. Now, with Apple Inc. (Nasdaq: AAPL), it is hype … but isn’t “just hype.”

If you’re out of the loop, nothing has changed with Apple as a business. But oftentimes, companies will do a stock split to bring share prices back to a certain, more investor-friendly level. There’s no dilution either, since no new shares are actually coming on the market.

But fractional shares are a thing … right? Don’t people just throw $20 for an itty bitty slice of AAPL pie?

Yes, but fractional shares aren’t as popular as many people in the industry think. Most regular investors are still wary of fractional investing … though, still not as wary as buying your stock via gift cards at Target. (Oh man, looks like FB is out of stock. Ha! I slay myself.)

So, when AAPL splits four-for-one, and its price hits about $110 or so, people will buy it because they’ve wanted to buy it for a while but couldn’t afford it. Or, as you point out, they just want more shares.

Options traders and Robinhood traders are already in their foxholes, building up their positions to ride an oncoming rally of both first-time and repeat buyers. What’s the precedent here? Literally every other AAPL split.

The government should not be involved in the TikTok potential deal.No way that I would spend that kind of money for the Virgin Galactic scheme.

Hoping that you address NKLA again now that they have reported their quarter.

I can’t tell if you’re talking about Virgin Galactic Holdings Inc.’s (NYSE: SPCE) flights to the brim of space or the shares themselves. Either way, I agree.

Also, check out my reply to Rick L. yesterday, where we dove into Nikola Corp.’s (Nasdaq: NKLA) earnings report. Too long, didn’t read: No news was good news, and volatility’s gonna be volatile.

I love the song phrases you seemingly come up with seemingly on the fly, or is there someone furiously looking up stuff in the background? The Alice’s Restaurant Masacre segment was great.Keep up the good work. Oh yeah, the money stuff too.

Some say it’s a feature, not a bug, but it’s all my own dysfunction. I write and song lyrics just come out. Shame they’re always someone else’s lyrics. It’s a curse, really … just ask my family or anyone who’s met me. Oh yeah, that money stuff is pretty cool too. Thanks for writing in!

(Editor’s Note: He truly never stops with the puns and lyrics. Please help us…)

Thanks to all of you who wrote in! (Yes, even Gary. He’ll be back…)

We truly appreciate each and every one of your emails, even if we didn’t get to reply to them all yet. There’s more greatness in store next week, and if you have any questions for me, feel free to write in! GreatStuffToday@banyanhill.com is the spot for all your rants, raves, dialogues and diatribes.

I hope to see your email in next week’s issue! 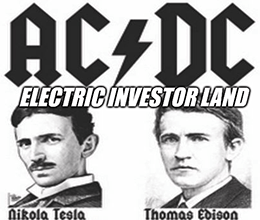 No Nikola News Is Good News?