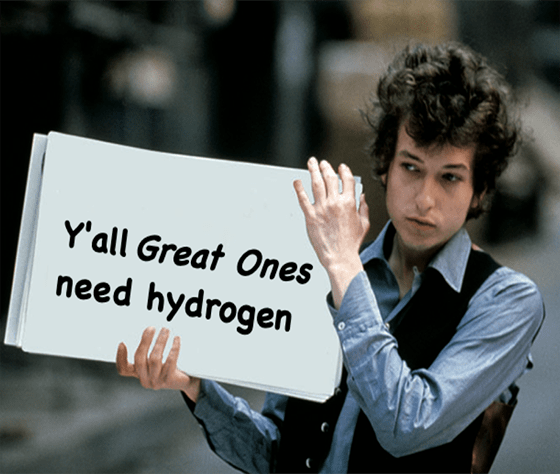 Play a song for you? Don’t mind if I do…

See, Great Stuff’s in the basement, mixin’ up investments. I’m on the pavement, thinking ‘bout the environment. The man in an EV, charged up, ready to go…

Hold on, I need one more cup of coffee if you’re breaking out Dylan.

Something something … the tides they are a-changing.

That’s right, I know what I said. Forget the “times” for a minute. The new energy tides — they are a-changing!

If you couldn’t tell by now, it’s energy week here at Great Stuff … as in … the stuff that propels you. Fuels you. Keeps you carrying on.

Don’t think twice, it’s all right! As for us here? It’s hydrogen all the way … but I’ll take some Chex Mix on the side if you’re offering.

Anything to take the edge off our thirst for ol’ oil, right?

Here comes the story of hydrogen — the fuel the investors came to trade. For something that he had never done! Put in a fuel cell, but one time, it coulda been … the champion of the energy world.

Well, it’s a good thing we do! Oil, hydrogen, times a-changing … let’s carry on like the rolling stones we are.

If you missed Great Stuff’s spiel on oil-geddon earlier this week, don’t worry, we won’t be talkin’ World War III blues here. Just click on over to our website to catch up.

Of course, you might also fancy catching up on the latest and greatest in hydrogen-powered earnings. Take Plug Power (Nasdaq: PLUG), for instance. No … seriously. Take it — click here to read why you need to plug into PLUG’s power play.

Elsewhere along the EV watchtower, we’re watching yet another soap opera brewing on EV Days.

From building better batteries … to the “Godfather of the EV revolution” … to infinite energy and beyond … and whatever the &$^% Tesla’s up to, there’s more than enough new energy news that’s, well, worth your energy.

And the silent inbox will shatter, from the sounds inside my mind. I’m one too many mornings and a thousand miles behind … so, you get to ramblin’, and I’ll ramble back in time. Bob Dylan lyrics welcome, not required.

After that, here’s what other Stuff you might’ve missed while you were tangled up in blue: 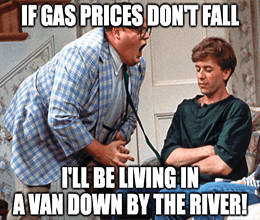 The Times They Are A-Changin’

Come gather ‘round, Great Ones, wherever you roam. And admit the murky waters around oil prices have grown … and aren’t likely to subside anytime soon.

Tangled Up In Batteries

Early one morning, I was lying in bed and thought: “Wouldn’t it be nice not to have to charge my EV every few minutes?” And then wouldn’t you know…

It’s space debris, actually … and for some space startup investors, look out below!

Down The Green Energy Highway

Well, I’m walking down the green energy highway, with my portfolio in my hand. These investing streets are gettin’ empty — but one industry marks the promised land. 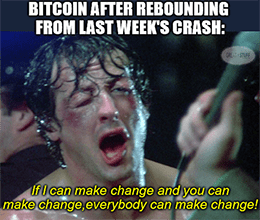 The Russia/Ukraine crisis exposed a core element of crypto’s design that, for good or bad, could have global consequences. 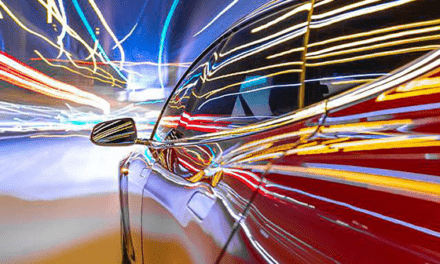 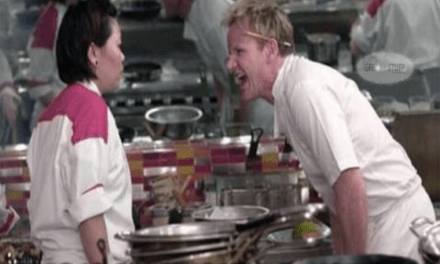