Home » Investing » This Hated Sector Is Ready to Take Off

This Hated Sector Is Ready to Take Off

The oil sector bet on prices staying high. Debt piled up as it raced to drill more wells.

Oil majors put $95 billion into exploration. That’s 150% more than they are slated to spend this year, according to Wood Mackenzie.

And while there was plenty of talk about how high prices could go, there was no mention of how far they could fall.

Yet fall they did.

The price of oil languished for two more years. The oil industry had to write off mountains of debt and tighten up operations. Stock prices collapsed. Energy giant Exxon Mobil Corp. (NYSE: XOM) pared off $129 billion from its market value.

However, even with subdued oil prices, many companies still turned a profit. But the market didn’t care. It was still smarting from the fall.

Today, profits and growth are back in the oil sector. But investors have been slow to return.

The chart below compares the price of oil with the VanEck Vectors Oil Services ETF (NYSE: OIH): 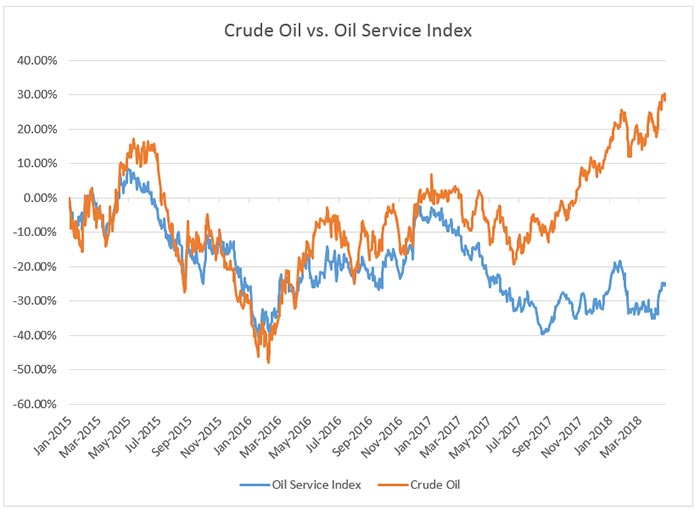 The oil service sector forms the foundation of oil drilling. It deploys the equipment and professionals to drill for oil and operate service rigs. It does the hard work, from fracking in the Permian Basin to deep sea drilling on the Gulf of Mexico.

When oil prices are higher, their services are in greater demand, and they can charge higher rates. That’s why their performance tracks the price of oil so well.

The split between oil services and the price of oil reflects sentiment, not fundamentals.

Investors are still sour about the last fall in oil prices. They’re letting their emotions get the best of them. Instead of overinvestment, we are now seeing underinvestment.

While oil has more than doubled in price in the last two years, the oil service sector has actually seen a slight decline.

This presents a great opportunity. The oil service sector is severely undervalued. A return to its historical valuation could see share prices jump over 40%.

The OIH ETF and the iShares U.S. Oil Equipment & Services ETF (NYSE: IEZ) provide exposure to this sector. These exchange-traded funds are market-cap weighted and hold some of the largest oil service companies, including Schlumberger Ltd. (NYSE: SLB) and Halliburton Co. (NYSE: HAL).

Readers of Real Wealth Strategist are already seeing great performance from our oil service play. Our next issue will feature even more great oil service companies with the potential for double- or even triple-digit gains.

How to Know When It’s Safe to Buy Stocks Again