Grab the Dip in This Oil Sector Now, Make a Bundle

Back in March I said I expected oil to hit $75 by year’s end.

As it turns out, we only had to wait until May before crude topped out within 3% of that level — and dropped off the cliff in recent weeks.

What to do now?

It’s an opportunity to reload on the best value play in the energy sector today.

Moves on the Horizon

Since I recommended it on March 20, the VanEck Vectors Oil Services ETF (NYSE: OIH) is up 7%. 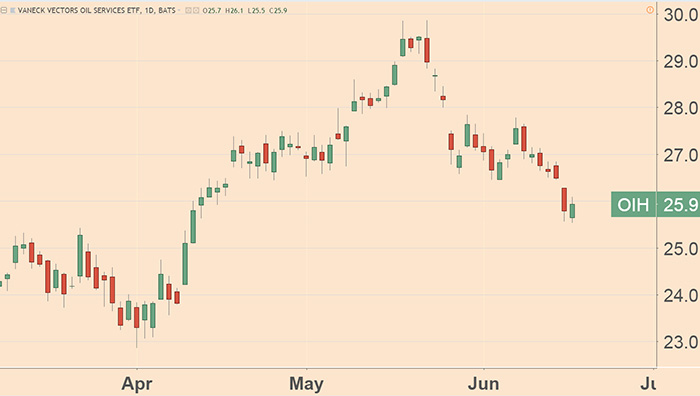 Bigger moves are on the horizon even in the unlikely event that oil prices move sideways or even lower in coming months.

Oil Demand Up, Rig Supply Down

The International Energy Agency (IEA) recently made headlines when it said higher oil prices might curtail the growth of the global economy.

Yet in the same breath the agency noted the global oil glut of recent years — as oil prices fell from $100 to $25 a barrel — is history. Inventories of oil in developed countries are now 1 million barrels below the rolling five-year average.

Translation? There isn’t much wiggle room if the global economy runs hotter than the IEA forecast.

And it sure looks to me like that’s exactly what’s going to happen.

As Bloomberg recently noted, oil demand there surged for the eighth straight month. According to India’s oil ministry, the country is now burning through the rough equivalent of 6.8 million barrels more oil than it did the same period a year ago.

And trade tensions or not, China’s thirst for oil continues to grow.

The point is, oil demand isn’t going away anytime soon. It’s growing. And producers have to find those additional supplies somewhere.

Long-term, that means putting more oil rigs in service, and more contracts for the oil service companies that own and maintain them — especially in offshore production zones, where oil companies cut back their spending in recent years.

According to analysts at Rystad Energy, investments in offshore oil projects are set to bottom out this year, and rise at an 18% compounded annual growth rate through 2025. 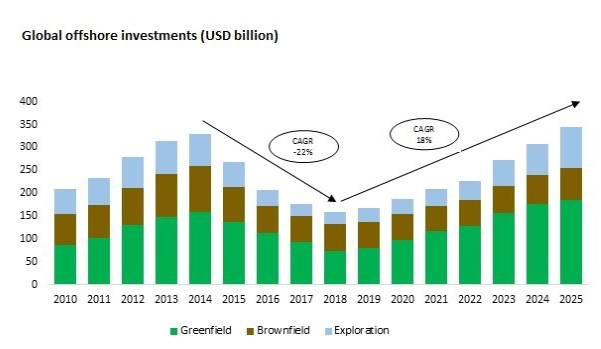 But here’s the twist…

The rig owners — companies like Transocean, Ensco, Diamond Offshore and others — have been stuck with an excess supply of rigs in recent years. Again, that’s because of the now-ended oil glut.

And what have these companies been doing since then?

Sending a steady supply of now-obsolete offshore rigs to the scrapyards.

Transocean made news the other day when it sent four of its rigs to the recycling bin, and wrote off more than $500 million in related charges. But that’s only the latest of a slow-motion shrinkage in the world’s fleet of offshore rigs.

See, the rig market works by supply and demand like everything else. Right now, only about 63% of the world’s offshore oil rigs (this includes so-called “jackup” systems, semisubmersible platforms and drillships) are in use.

A utilization rate of 85% is the generally accepted threshold for seeing higher day-rates (and therefore larger per-share profits) among offshore oil service companies.

And with each rig sent off to the scrapyard, the utilization rate ticks closer and closer to that 85% threshold.

And according to analysts at Bassoe Offshore, as many as 340 of these massive drilling and exploration platforms could be sent to the recycling bin through 2020.

So my bet — and the reason why it’s worth buying an exchange-traded fund like the VanEck Vectors Oil Services ETF now — is that the ongoing retirements of these rigs will supercharge the sector. That will push the stock prices of offshore oil service companies sharply higher over the next few years.
Regards,