I don’t have to tell you this. We’re seeing that in real-time today, as Florence and her after-effects strike the Carolinas.

But hurricanes affect other things, too … including stocks.

As a value investor, I review these events from a human perspective … and a financial one.

Hurricane season is upon us again. And the trepidation that folks in the way of these storms feel is, too.

That said, these terrible events can also bring opportunity to us as investors. As an analyst, I’ve seen this over and over again through the years.

Take a look at this chart: 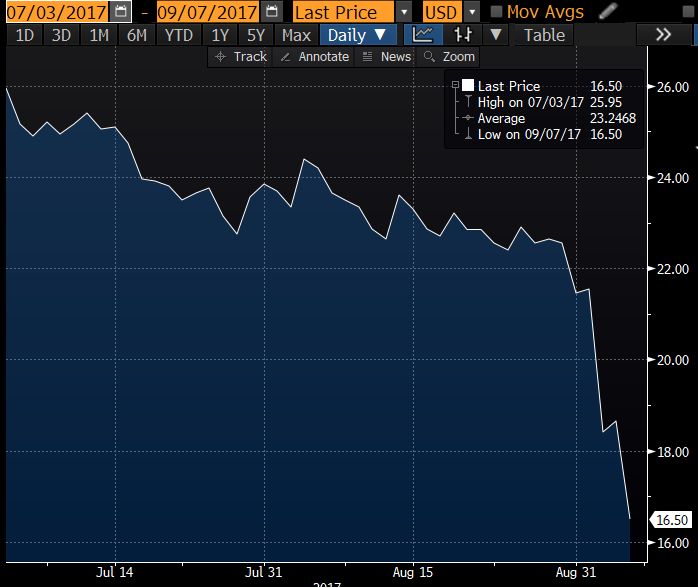 This is the stock of the largest personal residential insurer in the state of Florida. It fell 36% as Hurricane Irma was gaining strength in the Atlantic Ocean last year.

The Category 5 hurricane was a tropical depression off the coast of West Africa on August 30.

Irma eventually made seven landfalls as a Category 5 hurricane. Its first on September 6 was in the Caribbean island Barbuda. The results were devastating.

Irma forced all residents of the island to evacuate … leaving it uninhabited for the first time in 300 years.

The storm left a path of destruction in its wake before it got to the U.S. Then it continued. It made landfall in the Florida Keys at 9:10 a.m. on September 10.

Irma made its final landfall near Marco Island later that day. It brought maximum sustained winds of 111 mph and even stronger gusts.

It weakened to a Category 3 storm later that day. But its winds still gusted up to 130 mph.

The storm wreaked havoc. It set records. It caused at least $50 billion in damages in the state of Florida.

Anecdotally, it was the top term searched on Google last year.

Something strange happened after Irma decimated Barbuda … while she was somewhere near the Turks and Caicos Islands. The stock I mentioned above bottomed, then it moved higher. 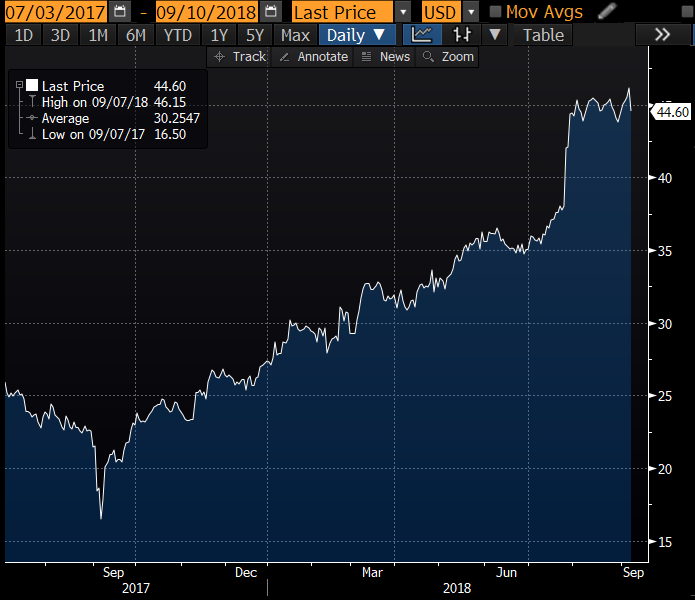 It bottomed on September 7. Strange, right? Based on the above timeline, Irma went on to create billions of dollars of damage — much of it in the state of Florida — after this date.

Israeli psychologists Daniel Kahneman and Amos Tversky have an explanation. The duo are the stars of Michael Lewis’ book, The Undoing Project: A Friendship That Changed Our Minds. They’re credited with changing the way we think about how we think.

People seek to avoid losses. Kahneman and Tversky showed losses cause a greater emotional impact on someone than the same amount of gain.

Before the storm arrived, investors worried about how bad it would be. They believed property insurers — especially those in Florida — would suffer huge losses. They sold their shares to avoid them.

From July to the market close on September 7, 2017, worries about the storm had removed $340 million from the market cap of a less than $1 billion stock.

The market selling had already factored in a worst-case scenario.

That was too much.

Buying shares at their bottom on September 7 would have been one of the smartest things you could have done. The share price more than doubled since.

It was a classic case of “sell the rumor, buy the news.” And it will happen again.

We would like to see hurricane season come and go with little damage.

But Hurricane Florence and Tropical Storm Gordon have already dashed that.

As you can see in the above chart, the stock of the insurer we’ve been discussing is still near its high.

But if Florida experiences a damaging storm, look out.

You shouldn’t be surprised if shares sell off from current levels. History shows they may drop to worst-case levels. Remember, people actively seek to avoid losses.

When the storm passes, shares are likely to move higher. Insurers can raise rates after a disaster. And insurers also have insurance to protect themselves.

If it sounds too simple, thank your DNA. It’s because humans are predictable.

And, remember, this concept applies outside of Florida as well.

If you know of a property insurer focused on another storm-prone state, its shares can move in the same way. That sell-off can create an opportunity for you.

Biotech Has More Opportunities Than Ever Before

The Most Overlooked Form of Diversification