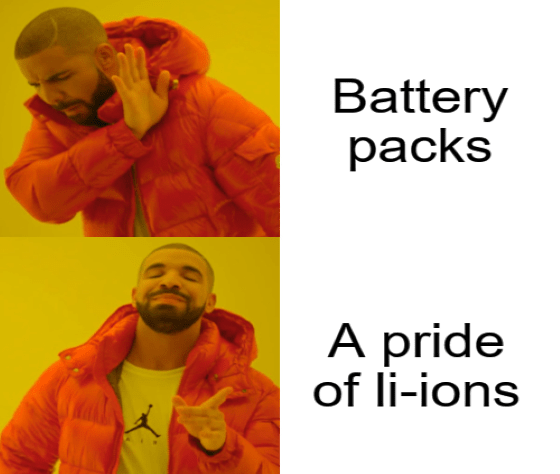 You say you want an energy revolution, yeah? Well, we all want to charge the world.

Sir, the Beatles did not sing that…

No, and it sure doesn’t rhyme, either. But for all y’all out there who’ve somehow avoided the EV insanity that fills almost every other edition of Great Stuff these days … the EV revolution is nigh.

All right! Time for some tasty Tesla earnings!

Umm, you’ll have to wait for that. Because what’s happening in the EV market — and by extension, the lithium market — is much, much bigger than just Tesla (Nasdaq: TSLA) or any one automaker.

We’re talking about the real great stuff powering EVs: lithium. Prices for the battery-building material hit a new record high on Monday and have shot up 488% over the past year.

To those in the lithium market commentary circles — a rabble-rousing bunch, I’m sure — lithium prices have soared so much that they’ve apparently reached “ludicrous mode” as the insane demand for EVs meets the rest of the global supply crisis.

And neither has the EV market! New EV registrations jumped 35% in December alone. And with every automaker and their mother releasing new electric models in the coming years … except for maybe Tesla (more on that in a bit) … we’re gonna need a whole lot of lithium to power said vehicles.

So? Big whoop. I thought hydrogen was supposed to solve everything?

Hey, as much as we’ve hyped up hydrogen power in Great Stuff, weaning the entire auto industry off that sweet, sweet Texas tea isn’t an overnight fix. No one’s going cold turkey on oil, and we’ll need as many options as possible to make the electric transition actually happen. 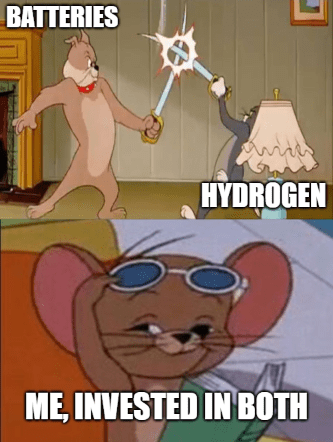 While some automakers are finally waking up to the benefits of hydrogen fuel cells in vehicles, battery tech is right here, right now — and it has the lithium industry going gorillas.

All those futuristic “forever batteries” you keep hearing about? Yeah, they need lithium too. You say you got a real solution that doesn’t involve lithium? Well, you know … we’d all love to see the plan.

Now, if only you Great Ones had a way in on this lithium rally. Hmmm … such as, oh I don’t know, owning the world’s top lithium producer?

As such, ALB rallied about 32% throughout November and December before, well, settling back around the $205 to $210 range we bought in at. Them’s the breaks when Wall Street wants to punish anything remotely “growthy” … as if we’ll just stop using EVs and lithium batteries tomorrow.

But Albemarle? Oh, Albemarle ain’t slowing down — not when it provides lithium to the who’s who of the world’s battery makers. Seriously, 87% of EV batteries on the market (including Tesla’s batteries) come from Albemarle’s clientele.

The EV revolution can’t happen without lithium … without Albemarle. Remember what Great Stuff said when recommending ALB: “This is a long-term, buy-and-hold position. We’re banking off growth in the EV industry and skyrocketing demand for lithium.”

The company’s making beaucoup bucks from soaring lithium prices, though looking at how ALB shares have been trading, you’d hardly know lithium prices were at record highs.

If you haven’t added any ALB to your roster of EV portfolio picks, now’s the time! Or, you can check out what else is shaking in the EV battery market:

Dubbed the “Forever Battery” by elusive EV experts, one startup’s new tech could be the tipping point that finally makes EVs affordable for everyday Americans.

In fact, one Wall Street legend predicts this tech could spark a 1,500% surge in EV sales over the next four years.

What is this secretive battery tech? Click here to find out. 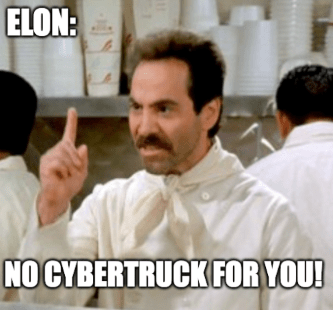 Earnings season just isn’t complete without a trip through the Tesla turnstile, which is why we’re putting this puppy right up front for your peepers to … well, peep?

Tesla’s fourth-quarter earnings results are in, and they’re even better than the Street anticipated. Here’s a quick look at the numbers:

Revenue also rose 65% year over year in the latest quarter even though Tesla’s “factories have been running below capacity for several quarters [due to] supply chain issues [that will] likely continue through 2022.”

Overall, it was a phenomenal quarter for the world’s leading EV maker. The problem — and what everyone on Wall Street is buzzing about today — comes down to Tesla’s talk of the future.

First, Tesla isn’t introducing any new vehicle models this year. Zip. Nada. None. Second, Musk’s much-anticipated Cybertruck isn’t making an appearance this year … and the jury’s still out on whether we’ll see it in 2023.

On the surface, this doesn’t sound like a huge deal for a company that delivered nearly a million vehicles in 2021. But now, rivals Rivian, Ford and GM will all have EV trucks on the market before the Musk Man.

At best, it’s a bad look for Tesla. At worst, it means Tesla’s EV dominance is waning faster than many thought it would … myself included. I mean, Ford and GM were always going to catch up to Tesla. Those are just givens. But Rivian?!

For context, Rivian was founded back in 2011 — a year before Tesla started talking EV trucks. Fast-forward to today, and Rivian’s R1T pickup truck is already on the market … while Tesla’s Cybertruck is still just a concept.

In other words, Tesla’s 8% decline in share price today is more than deserved — excellent earnings notwithstanding. 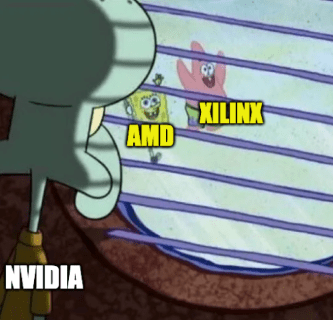 It’s rare that we get any good news coming out of China these days, but Chinese regulators clearly woke up on the right side of the bed this morning when they gave longtime Great Stuff Pick Advanced Micro Devices (Nasdaq: AMD) conditional approval to buy Xilinx (Nasdaq: XLNX).

I mean, of course China has conditions for the sale of the semiconductor superstar…

But all things considered, the Middle Kingdom’s mandate isn’t much of an ask: Don’t discriminate against Chinese clients and continue supplying China with Xilinx products. Easy peasy.

You say that now…

For AMD admirers like those of us here at Great Stuff, this news couldn’t come at a better time. By buying Xilinx — a maker of programmable silicon semiconductors — AMD gains access to an array of thriving markets, such as the automotive and communications networking industries.

This, combined with the ongoing semiconductor shortage, should boost AMD’s forward-looking guidance and act as a huge boon for AMD stock.

Even more interesting is the fact that AMD’s green light to buy Xilinx comes right on the heels of Nvidia’s (Nasdaq: NVDA) rumored abandonment of ARM. It seems to me that regulators are underestimating AMD in favor of other chipmakers. Otherwise, its bid for Xilinx would’ve come with more backlash.

Considering AMD is the current gold standard in processing power … and its chips will soon be virtually everywhere … that’s a big blunder. AMD’s rally is far from over, which is why Mr. Great Stuff recently reaffirmed the chipmaker as a buy for 2022.

Tell me… Are you down with AMD, Great Ones? (Yeah, you know me!) Or is there another chipmaker you’ve had your eye on? Let us know: GreatStuffToday@BanyanHill.com. 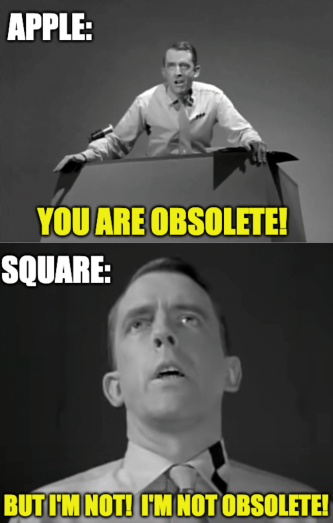 We all knew the day would come when smartphone makers sidestepped “the company formerly known as Square” for their own payment processing tech.

You see, we heard it through the grapevine that Apple’s developing a new software update that lets retailers accept payments on their iPhones — without any extra hardware. And now SQ investors are just about to lose their minds … seeing as Block is on the verge of becoming the next GoPro.

I mean, think about it: There’s just nothing unique about Block’s business anymore — not even its recent crypto buzz.

The hardware barrier that SQ used to enjoy is about to come tumbling down, and without that “moat” keeping Block safe from invading innovators, every smartphone seller will soon follow Apple’s lead. When that happens, Block’s payment processors will essentially become expensive paperweights that nobody wants to buy.

For the moment, it looks like Block investors are taking the news in stride, with SQ stock down less than 2% on the day. But we’ll see how Wall Street reacts when Apple actually launches its payment terminal later in the year.

Personally, if I were an SQ investor, I’d be singing “Not much longer will you be mine…” all the way to my broker.

Petco, Where The Contractors Go? 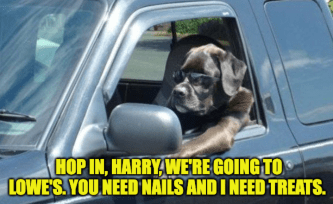 I don’t always take time out of my day to lurk around Lowe’s (NYSE: LOW), but when I do, I almost always pop around to the pet store for more dog and cat food while I’m out.

Don’t ask me why these two trips always seem to coincide … all I know is that they do.

This pet/home improvement store bang-bang must make up a lot of other people’s Saturdays because Lowe’s is launching a pilot program to open Petco (Nasdaq: WOOF) shops inside of select stores.

Woof is right … what is Lowe’s thinking?

Well, wouldn’t you know that home improvement projects and pet adoptions were two of the main reasons people kept a small semblance of sanity throughout the pandemic? Nothing keeps those beige bungalow walls from closing in around you like a coat of fresh paint and a constantly peeing puppy … amiright? Bueller?

For its part, Lowe’s is looking to become a one-stop-shopping-trip-shop (say that 10 times fast) on its quest to further differentiate itself from the likes of Home Depot (NYSE: HD). Petco products are just one of many new items that Lowe’s is adding to its inventory, along with fitness equipment and home décor.

Specifically, Lowe’s is trying to target millennial “nesters” who tend to tackle dog and cat ownership — not to mention DIY home demolition projects — before plunging into the baby pool. Because actual human babies aside, not much else will test your stress levels like puppies and open paint cans.

Now, while I fully appreciate Lowe’s’ concerns with trip consolidation, LOW investors don’t seem to understand the tool-timer’s about-turn just yet. LOW stock keeps seeing red on the day, kinda like I did during every one of my pandemic projects…

And that’s all she wrote, Great Ones! Write to us whenever the market muse calls to you! GreatStuffToday@BanyanHill.com is where you can reach us best. 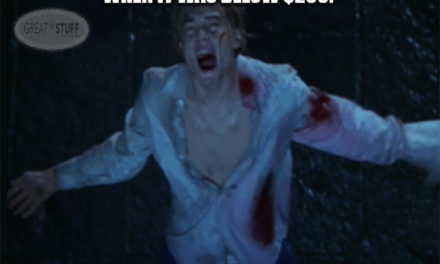 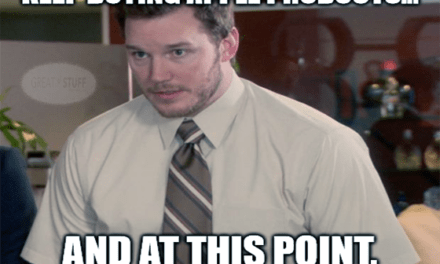 Apple’s $124 Billion Cult of Personality, PLUG-ing Back in & An EV Road Trip