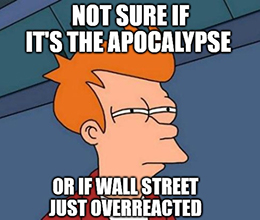 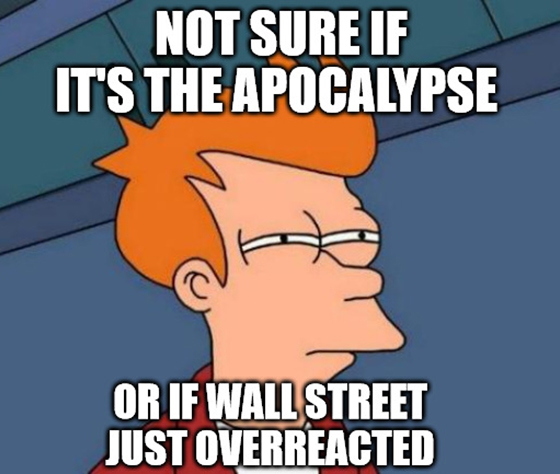 Another day, another virus story.

Are you sick and tired of the “kung flu” yet? (Editor’s Note: If you’re sick and tired with the kung flu, please seek medical attention immediately.)

After getting the sweats yesterday, the market appears to feel much better today. Much like you when you’re out of sick days, investors pushed forward today, focusing on the growing spate of corporate earnings reports.

Wall Street is also coming to the realization that it maybe … perhaps … possibly overreacted to the coronavirus outbreak. In a pair of complementary articles over on MarketWatch, columnists Michael Brush and Mark Hulbert explain away yesterday’s virus sell-off.

Let’s paint with Brush first. He lists five reasons why the virus fears are overblown. Those reasons are:

Meanwhile, Hulbert offers up a completely different reason for Monday’s virus breakdown. Hulbert’s reason? The market was just looking for an excuse to sell. (Sound familiar? I believe Great Stuff also made this case yesterday.)

In short, Hulbert says that short-term market traders were very bullish for several months in a row. Typically, even a couple of days of this extreme bullishness is enough to create some market weakness. This weakness never happened, however, and bullish sentiment continued to grow.

“So conditions were ripe for a pullback,” Hulbert noted. If it hadn’t been the coronavirus, it would’ve been something else.

As a firm adherent to the school of stock market sentiment, I’m much more inclined to side with Hulbert on this one. Brush paints with … well, a wide brush, relying on past performance and trusting Chinese data to judge the size of the outbreak.

I mean, I like investing in Chinese stocks, but I don’t trust official numbers from the Chinese government — especially when death and dishonor are on the line.

Hulbert’s depiction of a market hopped up on bullish sentiment resonates with me. After all, we’ve seen this same scenario play out time and time again in the past couple of years. (Remember the third quarter of 2018? That was a needed correction to overhyped bullish sentiment.)

The closer we get to the end of this bull market run, the more we’ll see this type of market action. Bullish sentiment will run rampant until some event takes that sentiment down a notch. Rinse and repeat … until the event is too big to brush off.

My concern here is that we haven’t seen the end of the coronavirus outbreak. This situation will get worse. However, if it stays mainly in China, we don’t have too much to worry about. It’s if/when the kung flu starts spreading in Western countries that this particular event will become too big for bulls to just brush off.

In the meantime, Wall Street bulls are overlooking the coronavirus in favor of corporate earnings. As long as the virus story stays contained to China, earnings will be your market driver for the next couple of weeks.

But, Mr. Great Stuff, what about the spreading virus? How can I focus on researching corporate earnings in a crisis like this?

I see you are a sensible investor, just like me, who can’t get rid of that nagging feeling in the back of your mind. Well, I have a solution for you!

You don’t have to go chasing waterfalls … er, corporate earnings. No, dear reader, you don’t have to fear missing out on this earnings season’s high flyers. Banyan Hill expert Chad Shoop has a much better way to trade during this time of year…

See, thousands of investors try to time earnings season and ultimately fail. But hey — you’re a better investor than that. (You’re a Great Stuff reader, after all!)

That’s why earnings expert Chad Shoop came up with the Quick Hit strategy. It lets you practically look over Chad’s shoulder as he spots stocks poised to make big moves.

That’s how Chad’s Quick Hit strategy gives you the chance to make a 100% gain virtually every month on average … for the past three years and counting. 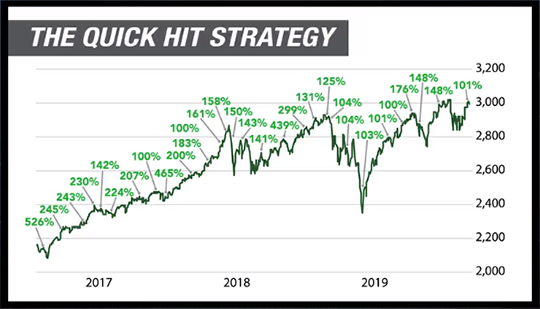 If you’re tired of missing out on the biggest earnings trades, Chad’s Quick Hit strategy could be just what the plague doctor ordered.

Click here now to see how you can profit with the Quick Hit strategy. 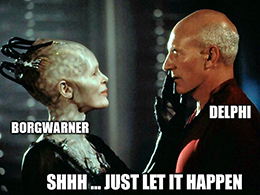 This morning, BorgWarner Inc. (NYSE: BWA) announced that it agreed to buy Delphi for $1.5 billion in an all-stock deal. The Borg will control about 84% of the combined company, which expects to see cost savings of about $125 million by 2023.

With the advent of electric vehicles (EVs) and simpler, cleaner combustion engines, consolidation in the auto parts sector was bound to happen. Both BorgWarner and Delphi — which specialize in engine and transmission parts — have seen slower growth in the past year, as governments issue mandates to improve fuel efficiency and cut emissions.

This deal was especially good for DLPH investors, with shares up more than 60% today. But it’s certainly a survival play for both auto parts makers in a rapidly changing market. 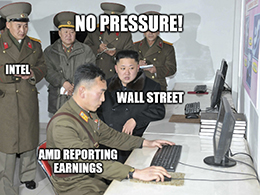 Invested in semiconductors? Then you don’t want to miss tonight’s quarterly report from Advanced Micro Devices.

Not only was AMD the best-performing stock of 2019, it’s also the leading semiconductor investment on Wall Street. Where AMD goes, so go the chips.

After a year’s worth of hype, new product releases and grand theft market share from rival Intel Corp. (Nasdaq: INTC) … expectations are through the roof for AMD. But just how high are they?

By the numbers, the consensus expects AMD earnings to rise a whopping 287.5% year over year to $0.31 per share. Revenue is seen soaring 48.7% to $2.10 billion. What’s more, those figures have risen in the past three months, with analysts adjusting both revenue and earnings targets higher.

Oddly enough, there’s still some lingering pessimism on the sentiment front. Only 11 of the analysts following AMD rate it a buy or better. The consensus price target comes in at $43.33 per share, nearly 15% below the stock’s current trading range.

I have a feeling that U.S.-China trade relations and the coronavirus drive this lingering negativity. That bodes well for AMD bulls, as neither should have a lasting impact on the company going forward.

Best: Tim Cookin’ up Some Earnings 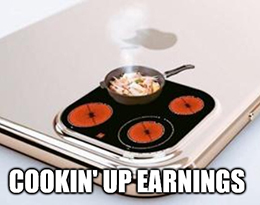 This may come as a shock to some of my long-term readers, but I’m starting to come around a bit on Apple. If you decide to take this as a contrarian indicator on the stock, I wouldn’t blame you.

Don’t get me wrong. I still don’t believe that Apple develops any new, revolutionary products like it did in the past. There’s no new iPod, iPhone or iPad-type device that’ll change the way we use mobile tech, the PC or anything. I’m not suddenly an EarPod user or an Apple TV convert.

What I am excited about is the fact that Apple has pushed out lower-cost iPhones recently. This creates incentive for customers to upgrade — and maybe even convert over from Android here and there. There’s also a massive upgrade cycle in the works for Apple. Not only are current devices nearing the end of their life cycle, but 5G iPhones will be a thing. This will bring in massive moola for Apple … eventually.

Tonight, we’ll finally see a glimpse of the fruits of Apple’s low-cost endeavors. Analysts expect the company to report earnings of $4.54 per share on record revenue of $88.45 billion. Given that Apple routinely trounces Wall Street’s targets, there’s not a whole lot to get excited about there.

What you need to watch is the iPhone unit-sales figures, the Services unit revenue and the Apple TV+ subscriber numbers (if Apple releases those). The iPhone sales could indicate if lower-cost devices are gaining traction. The other two are crucial to Apple’s future. If the company cuts iPhone prices, it needs to make up for that with services dollars.

I believe Apple will, even if it doesn’t convert any Android users. 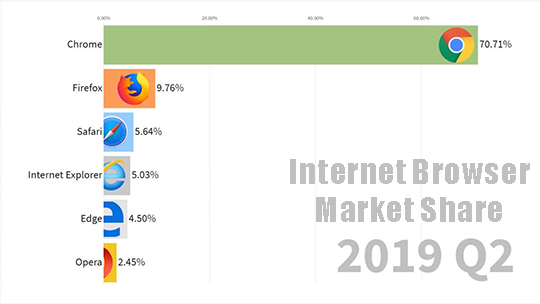 Many of you probably don’t think too much about internet browsers. As the chart above shows, you probably sit down and plunk away at Alphabet Inc.’s (Nasdaq: GOOG) Chrome while using Google Search and Gmail. It’s all integrated, so why not?

Well, I’ve grown tired of Google having so much access to my data in every aspect of my life. I switched to Firefox more than a year ago for privacy settings — and because Chrome is the biggest memory hog ever!

There are also rumors that Microsoft Corp.’s (Nasdaq: MSFT) new Chromium-based Edge browser could be just as good (if not better) than Google Chrome.

The chart above comes from a video detailing the browser wars of the past 20 years. The past seven years haven’t really been a war at all … more like a slaughter where Chrome kills all competition.

What are your thoughts, dear reader? Is there another browser war brewing? Do you still use Chrome, or have you switched to something else?

Let me know! Drop me a line at GreatStuffToday@banyanhill.com!

Speaking of dropping me a line … it’s that time again!

Write in to GreatStuffToday@banyanhill.com to let us know how you’re doing. Let me start you off with some hot topics: 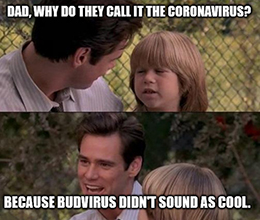