The financial media has reached a consensus: The Federal Reserve will keep raising interest rates.

The Fed has learned to telegraph its every intention months in advance. So, it’s not crazy to expect short-term rates will go up from here.

But the market is calling the Fed’s bluff.sec

How? Look at the interest rate on 10-year Treasurys. It warns us that investors are not optimistic about U.S. economic growth and inflation. Watch out! 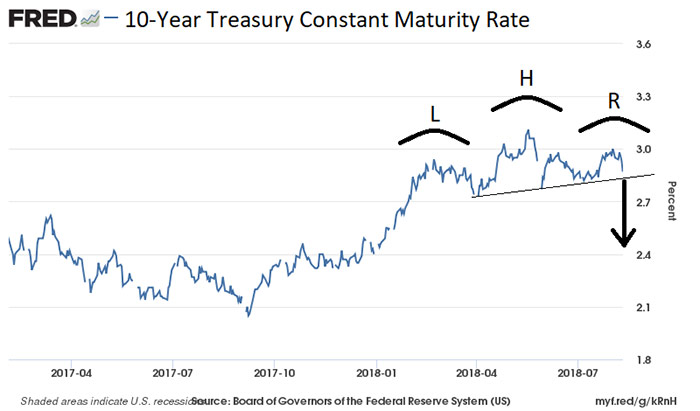 I’ve marked out a head-and-shoulders pattern on this chart of the 10-year Treasury rate. It consists of three parts: left shoulder, head, right shoulder.

It’s a reversal pattern, and it suggests the 10-year rate will not break above 3% anytime soon. In fact, the rate could fall to 2.45% or so in the next two months.

Is it bad if rates can’t break above 3%, and instead go down from here?

Yes, if it happens at the same time as shorter-term rates rise.

That’s a recipe for recession. And for a falling stock market.

When it’s easy and cheap to borrow money, we expect more of it will be moving through the economy. And the economy will grow.

When it’s costlier and more difficult to access money, we expect there will be less of it. And the economy will slow.

Today, the Fed is raising short-term interest rates, making it costlier for consumers and businesses to borrow money. At the same time, a decline in the 10-year rate is a signal that investors think Treasurys are a better bet than the economy.

After all, you wouldn’t loan a bunch of money to the government at 3% if you could earn a better return in the economy or stock market.

Sure, the bull market looks resilient now. And we will have opportunities to make money following the trend in the next few months.

But it won’t last.

We are in the late stages of the business cycle. And the bull market. When gross domestic product (GDP) slows, it’s time to prepare. Consider where your money is most at risk and how you can secure your portfolio.

U.S. Treasurys may not excite you. But they are typically a good safe-haven investment.

Treasury prices move the opposite direction as Treasury rates. When rates are going down, prices are going up.

You can use an exchange-traded fund (ETF) as a simple way to buy into Treasurys.

The iShares 7-10 Year Treasury Bond ETF (Nasdaq: IEF) tracks the performance of 10-year Treasury rates. It’s not going to make you a lot of money, but it’s one way to keep your money protected from a major market correction when recession strikes.

Now Is the Time to Buy Stocks Despite News Worries

Investing in Alibaba Stock Is a Steal Right Now