Invest in iRobot Stock Now at a Steep Discount

If I were to sum up the current market conditions in two words, they would be “instant gratification.” Essentially, Wall Street has become a throng of junkies looking for their next fix.

In their quest for yield, investors have become ravenous looking for the next earnings report where both top-line and bottom-line quarterly growth not only exceed expectations but do so in dramatic fashion.

Or the next mega-merger …  or the next multimillion-dollar stock buyback plan.

Immediate share price gains have become the only concern for many on Wall Street. There is no room to think about the future or reinvest in the company itself. It’s one of the many themes my colleague Ted Bauman has repeatedly hit upon in The Bauman Letter — if you’re not reading this newsletter, you need to start now.

This mindset has led to a market sentiment backdrop that punishes companies for even thinking about solidifying their market position or planning for capital expenditures down the road. For proof, you need to look no further than the erratic behavior surrounding this year’s earnings seasons. Sell-on-the-news events abound, and even stellar quarterly reports are not quite impressive enough to prop up stocks for long.

One of the best examples of this lies with market-leading robotics company iRobot Corp. (Nasdaq: IRBT). Back in February, Wall Street punished iRobot for trimming its bottom-line growth estimates to focus on growing sales and solidifying its market position. iRobot was looking ahead, while Wall Street was thinking about right now. As a result, we now have an excellent value investing opportunity.

While we are a long way off from the personal assistant robots in the eponymous Will Smith film, iRobot is the leading manufacturer of the current generation of such devices. The company’s lineup currently features the popular Roomba vacuuming robots, the Braava floor-mopping robots and the Mirra pool-cleaning robots.

When Roombas first hit the market, many consumers saw them as a novelty and not a serious household appliance. That perception has changed significantly since their launch in 2002. In fact, iRobot has averaged revenue growth of nearly 30% per share for the past five years.

Growth has picked up significantly in overseas orders, driven largely by the increasing popularity of the Braava floor-mopping robots — not everywhere has carpets like the U.S. In fact, European, Middle Eastern and African revenue soared 51% in the most recent quarter. Sales growth in Japan jumped 31% for the same period.

Going forward, iRobot is expected to see revenue growth in excess of 20% per year — which seems conservative given the recent uptick in overseas revenue.

Following iRobot’s most recent quarterly earnings report, IRBT stock soared more than 15%. The company beat both top-line and bottom-line estimates handily and provided inline guidance. But that wasn’t the case back in February.

At the time, iRobot once again beat both top- and bottom-line expectations but trimmed its full-year guidance. All investors needed to hear was “trimmed guidance” and IRBT stock plunged more than 20% following the report. Nobody listened to iRobot chairman and CEO Colin Angle when he said the move was to shore up the company’s market position:

I want to reiterate that iRobot is committed to a profitable growth strategy, showing an improving top line and bottom line. But at this moment in time, with the market accelerating in its growth and competitive pressure coming into the markets, we made a choice to double down on ensuring we had adequate dry powder to drive that top-line growth. Some investors may be looking for more bottom-line growth. […] This is a moment in time where over the next three years the true winners in the consumer robot industry are going to be determined for the next decade.

Essentially, the 20% haircut that Wall Street gave IRBT stock back in February was punishment for not putting shareholders’ immediate interests above the company’s long-term growth prospects and market share. For those of us who like to plan for the long term, this punishment is an excellent opportunity.

IRBT stock has yet to fully recover from February’s beating. The shares remain below their 2018 highs near $95, and their all-time peak of $106 set last year.

IRBT is undervalued considerably. The company is trading with a price-to-earnings (P/E) ratio of just 41, which is a bargain compared to the rest of the technology sector.

What’s more, the stock is on the verge of entering another uptrend, driven by technical traders. First, IRBT’s 50- and 200-day moving averages just formed a “golden cross” — a technical indicator that often precedes additional gains in a stock. Second, IRBT stock has broken out of a downtrending channel that began back in August 2016. In short, IRBT is about to resume its longer-term uptrend. 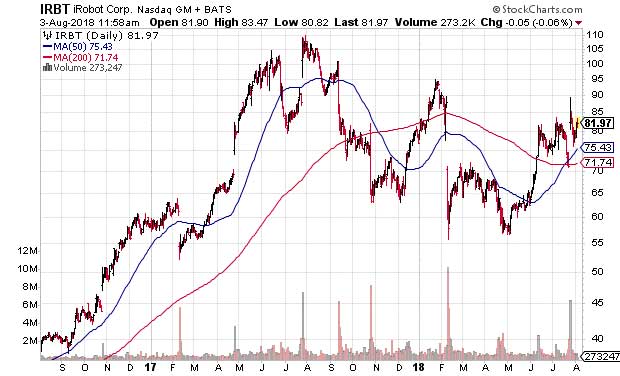 The bottom line is that iRobot is a buy right now as a long-term growth opportunity, not as an instant gratification gamble. And, after all, who doesn’t want robots cleaning their house for them? We have been spoon-fed this idea of cleaning robots by science fiction movies for decades.

iRobot is not only delivering on this dream, it is leading the way toward more modern and efficient home robots down the road. And it’s doing so by investing in the company’s growth and protecting market share, not by maximizing quarter-over-quarter shareholder returns.