One thing I’ve seen over and over again in my career as a journalist and investor is the well-documented phenomenon of Wall Street analyst “pile-ons.”

You know, where a stock is headed unsustainably higher and higher — and analysts outdo each other raising their price targets.

It happens in the other direction too, where analysts come up with all sorts of reasons to justify why a company’s stock will head lower and lower.

A shareholder would seemingly have to be stupid, crazy or “very, very brave” (as Vanity Fair’s finance writer said on CNBC last month) to justify owning the stock.

On the other hand, GE insiders are buying the stock by the bucket-load.

The Insiders Are in It for Real

The list of insider buyers at GE includes the CEO, a senior vice president and the head of a $39 billion technology company:

Culp’s purchase is his second in four months. He bought nearly $2.5 million in shares in late July when he first joined GE’s board.

I like it when a new CEO buys a big chunk of his own stock with personal cash.

I love it when he doubles down and buys more, even when the stock’s heading lower amid a blizzard of bearish headlines. It shows he or she is in it for real, not for show. 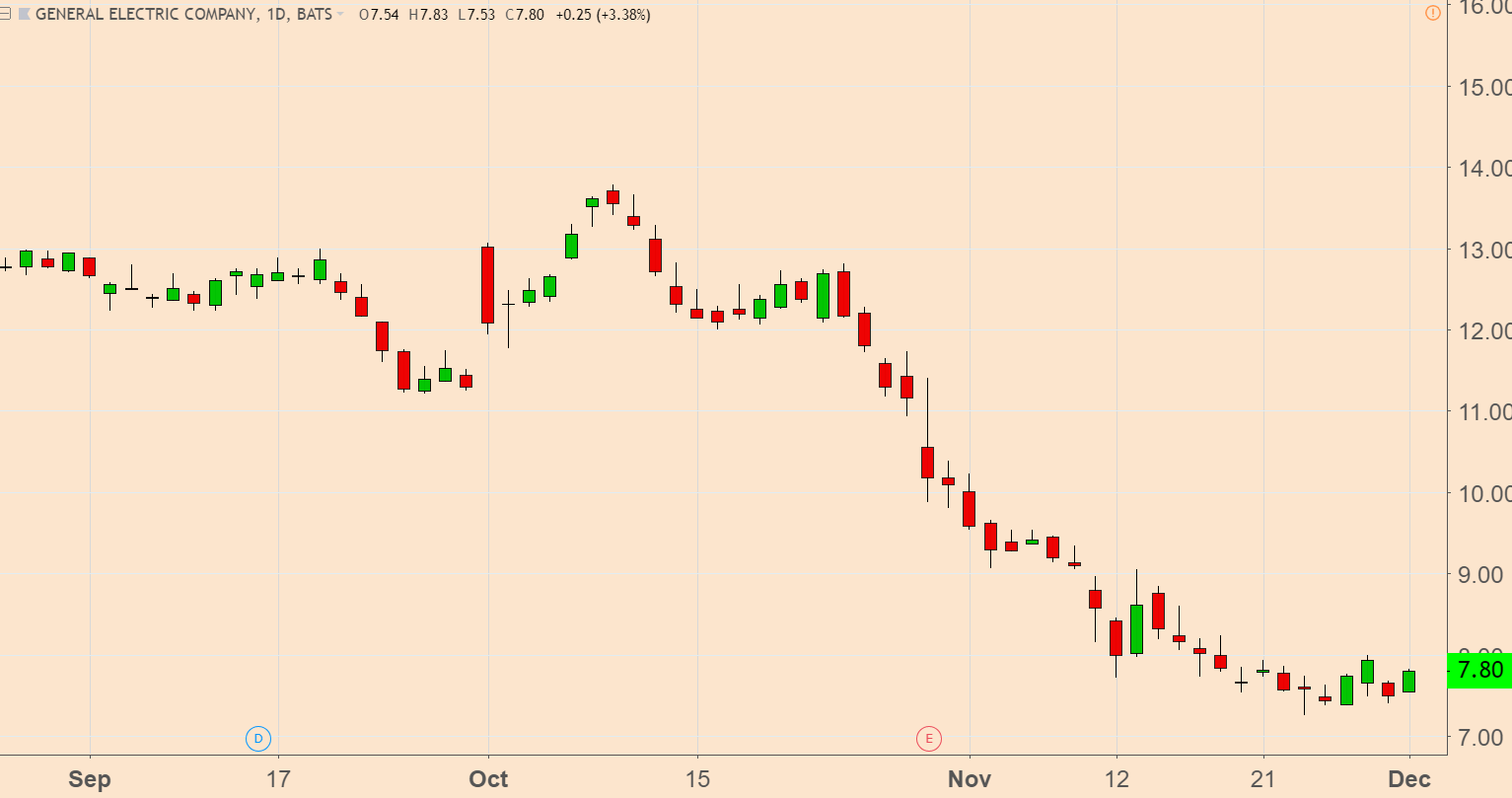 And what about all the pundits’ worries?

We’re told GE Capital is a bottomless pit of liabilities. GE overpaid for its acquisitions. It carts around a ball and chain of long-term debt.

GE Power is problematic in an era of shifting energy priorities.

The Securities and Exchange Commission is looking into the company’s accounting practices.

And some are even worrying that GE’s one solid bright spot — aviation — could be hitting the top of its cycle.

So analysts outdo each other with yet-lower stock targets of $7, then $6 … and lower.

I have a question.

Where were these analysts, with their doomsday calls on GE, when the stock traded above $30 two years ago?

With a few exceptions (like JPMorgan Chase’s astute Stephen Tusa), most figured GE would muddle through. Having gotten it wrong, it’s “pile on” time.

But here’s the thing: None of the worries are new.

They’re all well-known issues that have been exhaustively written about for weeks, months and even years.

In short, those worries are already reflected in the single-digit price of the stock, in my view.

So what isn’t well-known?

GE Power — an important driver of the parent company’s profits — is at the bottom of its sales cycle. But according to veteran utilities analyst Hugh Wynne at Sector & Sovereign Research, there’s a huge new purchasing cycle just ahead.

Part of that is due to fast-growing emerging markets. And in mature markets like the EU and the U.S., the focus is on retirement of coal-fired units. (Europe has more than 280, most due for phaseout by 2030.)

What about GE Aviation? Wouldn’t a global economic slowdown mean a sharp drop in profits for this division?

Viewed from a simple straight-line perspective — that airline growth goes up and down in lockstep with the global economy — it might seem that way.

But there’s a legion of aircraft out there now reaching the end of its useful age of 20 to 30 years in service.

Researchers at Alton Aviation Consultancy predict that the number of yearly plane “retirements” — where the jet is taken out of its fleet and sent to a desert boneyard — will roughly double over the next decade from less than 600 annually now to around 1,100 by 2028.

And with 28,000 aircraft in service right now, the same researchers expect the overall size of the global fleet — retirements included — to grow nearly 4% a year, reaching over 44,000 in the next decade.

It seems like there’s plenty of growth left for an aggressive, slimmed-down GE to take its share of the market in coming years.

Lastly, while few people realize it, GE is a “backdoor play” on the coming revolution in 3D printing.

Even five years ago, 3D printing was a plaything for hobbyists and for rapid prototyping. But GE and other leaders in this category are now starting to “print” parts on a production scale.

As of a year ago, GE had already printed and shipped more than 25,000 replacement parts to its various corporate customers around the world. I’m sure the number is far higher now.

They recognize that 3D printing is the future for the global economy, and for GE’s efforts to reinvent itself for that future.

But the overall point here is to not let yourself be swayed by analysts’ overly pessimistic (or optimistic) “pile on” judgments.

Utilities Stocks Are Outperforming the Market — Here’s Why