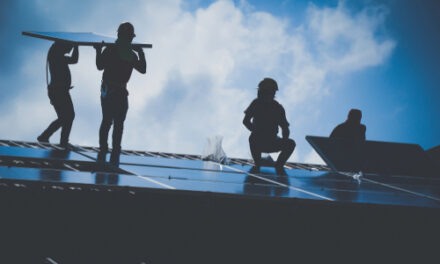 Should you buy the dip?

With no shortage of pullback candidates, that’s the question on the minds of many investors lately.

For instance, Cathie Wood’s ARK Innovation ETF (NYSE: ARKK) has fallen by 31% in just over three months. Nearly $40 billion has been wiped off the exchange-traded fund’s (ETF) assets.

Now the carnage has spread to the cryptocurrency space as well.

Popular coins such as bitcoin and Ethereum have plunged, with the former falling by 40% in just over one month.

All told, cryptos have collectively lost $1 trillion from their combined market capitalization in only two weeks!

But this now creates an enticing moment.

For investors that missed the initial run-up, the big pullback in these high-flying sectors means a buying opportunity.

Where to Find Bargains Now

As Ted and I argued in our most recent edition of Your Money Matters, there are still too many obstacles and further downside momentum facing cryptocurrencies.

And even with the pullback in ARKK, valuations of its underlying holdings are still expensive compared to the broader market.

But there’s one more sector that’s given back a chunk of its gains, presenting a true buying opportunity…

Renewable energy shares were among 2020’s big winners, but have retreated sharply since peaking in February … making this one area of the market to scoop up shares, especially in the solar space.

Countries around the world are adopting policies to accelerate the deployment of solar installations to combat climate change.

And it’s a trend that will only accelerate further. That’s because of several converging factors that make the future bright for solar stocks, including:

Falling costs. The average installation cost of solar photovoltaics across the globe has fallen by 79% just in the past decade. That’s led the International Energy Agency to declare that solar power schemes now offer the cheapest electricity in history.

Battery storage. Advances in battery storage technology are making renewable energy deployments more viable, because excess power can be stored and delivered at any time. That’s why the global storage market is forecast to grow 35% every year through 2030.

Those factors mean that the solar industry will become a $223 billion opportunity just in the next five years!

And this is all before you even consider the infrastructure bill making the rounds in Congress, which has $146 billion earmarked for accelerating the adoption of renewable energy.

Right Bargain at the Right Time

Here’s something else that makes the opportunity in solar companies stand out from other high growth stocks: valuations.

The median price-to-sales (P/S) ratio for stocks in the Invesco Solar ETF (NYSE: TAN) stands at 4.2. For ARKK, that figure is nearly three times higher at 11.6.

That means solar stocks fit a profile I find attractive in an uncertain market: growth at a reasonable price.

The chart also tells me that we’re seeing a buying opportunity.

The price of TAN recently bounced higher off the $70 level. That’s an important price support from the last big consolidation shown with the green box. And the moving average convergence divergence (MACD) indicator in the bottom panel is just now turning higher from oversold territory. 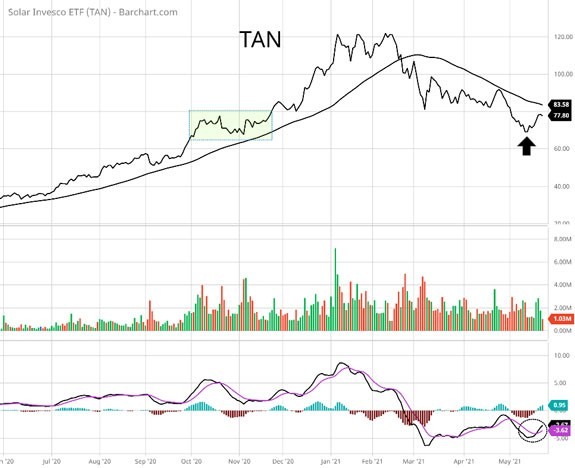 So, as you consider your buy-the-dip candidates, be sure to put TAN at the very top of the list! 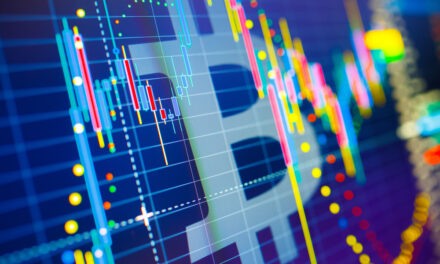 Crypto Volatility Is Your Best Chance for Gains 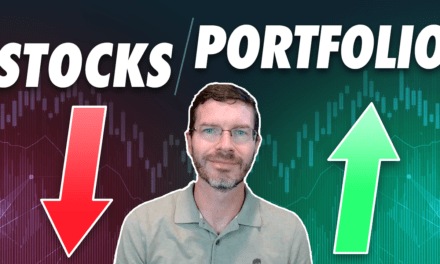 Profit From the Market’s Plunge