A Golden Age for Metals Explorers

A couple weeks ago, I attended the Metals Investor Forum in Vancouver, Canada. It’s a great gathering of CEOs and other executives of up-and-coming explorers, developers and miners. Today, I’m going to show you two of the best.

One of them is a gold explorer. And we’ll get to that, but the other is a zinc explorer. Now, many of you may be saying: Zinc? Who needs that?

Answer: The world needs zinc. As I explained in a recent column, zinc prices are soaring. Zinc is one of the hottest metals in the world. And it’s getting hotter.

So, with that in mind, let’s get to my first interview: Fireweed Zinc Ltd. (TSX-V: FWZ). That’s a company advancing the Macmillan Pass zinc-lead-silver project in Canada’s Yukon Territory.

Indeed, Macmillan is one of the world’s largest undeveloped zinc resources.

I’ve known some of the executives of this company for years. Ever since the days when I was young and handsome, gallivanting around Mexico. And that was a long time ago.

But the company has new blood, too. Including Brandon Macdonald, the CEO of Fireweed Zinc. In the following interview, he lays out the case for zinc and his company.

Macdonald talks about the long-term structural deficit in zinc, and how Fireweed is uniquely positioned to take advantage of it. And the company just published a new resource estimate.

Now, there are challenges for Fireweed Zinc. For one thing, this stock is so small, so undiscovered, that it doesn’t even have a lot of trading volume on the TSX-V in Canada. And its listing in the U.S. is on the OTC Grey Sheets; that’s very tough to trade.

Nonetheless, Fireweed Zinc is a great company. This is the kind of company people look for when they want to buy a future kingpin at pennies on the dollar.

Auryn Resources Inc. (NYSE: AUG or TSX: AUG) is a gold explorer with an embarrassment of riches. It has rich, big projects from one end of the Americas to the other.

Ivan Bebek, executive chairman of the company, gives us the rundown on all the company’s major projects and where Auryn hopes to go from here.

Auryn Resources is listed on the New York Stock Exchange, so it’s easy to buy. But it too has its challenges. This market is brutal in valuing gold explorers … until it isn’t. When Auryn sells one of its seven big projects — which I think could happen — then Auryn’s share price should blast off.

Until then, it could snooze and bump along the bottom. It is totally unfair, but that’s the market we’re in right now.

Why These Stocks Are Counting Down to Blast Off

Gold miners have been beaten down by the market. Gold explorers in particular were lined up and beaten like rented mules. That may be about to change. Here are three reasons why…

Dollar weakness is now official U.S. policy. You saw the U.S. dollar hit a three-year low recently. Treasury Secretary Steven Mnuchin gave the greenback a shove down the greasy slope of nope when he said that that the dollar can fluctuate, and he is not concerned by the current weakness.

Why? A weak dollar boosts U.S. exports and therefore, the U.S. economy. After sparking an uproar, Mnuchin tried to walk it back. No one’s buying his change of heart.

Since gold is priced in dollars, as the dollar goes lower, gold usually goes higher.

Explorers are leveraged to gold. I said gold explorers were beaten like rented mules. That’s too kind. They’ve been beaten like the redheaded stepchildren of rented mules who are off their meds. Look at the action in gold and explorers since the start of 2017… 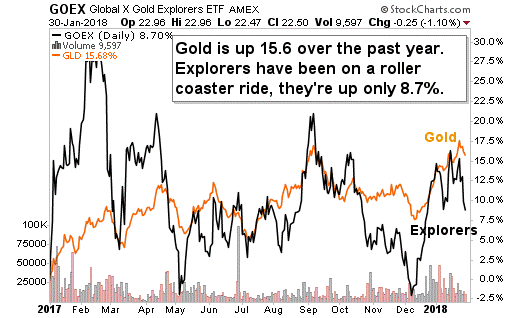 When gold starts to rise, explorers usually take off. Then when gold gives some back, explorers take a plunge. That’s why, despite this roller coaster ride, explorers have made only half the progress of gold itself.

But again, thanks to a weakening dollar, gold is poised to take off. That bodes well for explorers. They should be on the launch pad.

All this goes double for zinc. In the last year, two big mines in Australia and Peru — both global suppliers of zinc — shut down. Bam! Bam! Meanwhile, China shut down 26 mines, and China’s imports of zinc are up 22% year over year. The world has a growing need for this most useful of metals, and only a few explorers are poised to fill that gap.

The bottom line is, we may be coming to a “golden age” for small explorers with great projects. You may want to do your homework and start placing your bets. You don’t want to miss the next rally.