Here’s How to Find a “Jackpot” Tech Play

*All investing involves risk of loss. Always invest at your own comfort level.

Or if you had gotten into Amazon at just the right moment … post books but pre-everything else … you could’ve made an increase of 134,000%. An investment of $1,000 in 1997 would be well over a million dollars.

Wall Street legend Paul says it’s all about timing … and when Paul speaks, people listen. His record speaks for itself.

As one of the most successful brokers on Wall Street, Paul’s strategy has correctly timed some of the biggest tech plays of the last 20 years.

And its how he made a massive 2,439% gain on Sarepta Therapeutics, before anyone had even heard of the company.

After months of exhaustive research, Paul has revealed his latest “jackpot” tech play. A small California-based chipmaker that is poised to unlock an entire new industry… and the growth potential could be greater than Microsoft, Amazon and Facebook combined.

He’s done all the legwork and put it into a controversial video detailing what he thinks will be the No. 1 stock pick for 2019. 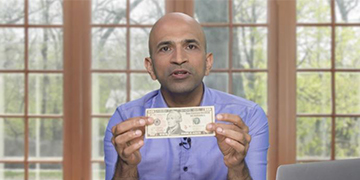 Legal Notice: This work is based on what we’ve learned as financial journalists. It may contain errors and you should not base investment decisions solely on what you read here. It’s your money and your responsibility. Nothing herein should be considered personalized investment advice. Although our employees may answer general customer service questions, they are not licensed to address your particular investment situation. Our track record is based on hypothetical results and may not reflect the same results as actual trades. Likewise, past performance is no guarantee of future returns. Don’t trade in these markets with money you can’t afford to lose. Investing in stock markets involves the risk of loss. Before investing you should consider carefully the risks involved, if you have any doubt as to suitability or the taxation implications, seek independent financial advice. Banyan Hill Publishing expressly forbids its writers from having a financial interest in their own securities or commodities recommendations to readers. Such recommendations may be traded, however, by other editors, Banyan Hill Publishing, its affiliated entities, employees, and agents, but only after waiting 24 hours after an internet broadcast or 72 hours after a publication only circulated through the mail.

(c) 2018 Banyan Hill Publishing. All Rights Reserved. Protected by copyright laws of the United States and treaties. This Newsletter may only be used pursuant to the subscription agreement. Any reproduction, copying, or redistribution, (electronic or otherwise) in whole or in part, is strictly prohibited without the express written permission of Banyan Hill Publishing. 1880 N. Congress Ave, Boynton Beach FL. (TEL: 866-584-4096)