Energy Will Be the Most Tradable Sector in 2022 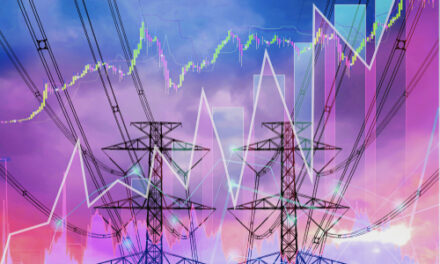 As Americans, we don’t always pay attention to the rest of the world.Unfortunately, this is also true of policymakers, who are often surprised by events that seem obvious in hindsight. Examples of this include the fall of Kabul last year, and the fall of Saigon almost fifty years ago.But as traders, we should be aware of important trends in global affairs. These forces have a major impact on worldwide trade, which can cascade into price action and trends that we can follow and profit from.And in my view, there is one trend that will define the volatility of 2022. Massive changes are occurring in this sector across the world, and options traders need to understand this trend if they have any hope of profiting from this volatility.

Pay Attention to This Trend

The trend we can’t ignore is the climate crisis.This has been a priority in Europe, perhaps more so than in the U.S., and recent German election offers a potentially tradable insight into this issue.Before the election, a popular German news site noted “the fight against climate change is one of the German voters’ main topics of concern.”After the elections, analysts were left asking questions such as “why the Green party had failed to gain more traction among voters despite high aspirations and the ever-growing threat of climate change.”In other words, once again, the media missed what was truly important to voters.Last weekend, a poll revealed that Germans want the new government to focus on fighting the coronavirus pandemic and safeguarding pensions in 2022. The poll found, “Germans also want the government to deal with a shortage of staff in nursing homes, provide affordable housing and limit the rise in energy prices. Dealing with the impact of climate change only ranks sixth in their list of priorities.”While politicians say they are focused on climate change in Germany, across Europe and in many other countries, politicians are really focused on the next election.Rising energy costs have politicians around the world worried, and that is likely to create trading opportunities.

In Germany and several other European countries, electricity prices are at least 50% higher than in the U.S. Consumers are reacting to the higher energy prices by voting for politicians who promise change. The recent election in Peru shows that change can be radical.The new Peruvian president promised to nationalize Peru’s mining and energy sectors so that he could create a million new jobs in a year. That would certainly be amazing job growth in a country of about 33 million.The point is that voters are seeking change, and that is likely to be true in the U.S. election in November. Much of that change is likely to be focused on the energy sector.Nationalization in Peru would most likely be bearish for energy companies but bullish for oil prices. In Germany and elsewhere, including California, action to lower prices would likely be bullish for exploration companies.Of course, politicians around the world will react to varying constituencies. Some will say anything to get elected and that could send the sector sharply lower. But the higher energy prices the tough talk leads to will eventually be bullish for the companies.The bottom line is this sector will be whipsawed by news all year. The outlook is constantly evolving. It’s likely to become a critical issue for voters and politicians alike, though in different ways.So if options traders follow just one sector this year, it should be energy.Regards,

Chart of the Day:Higher Energy Prices Ahead 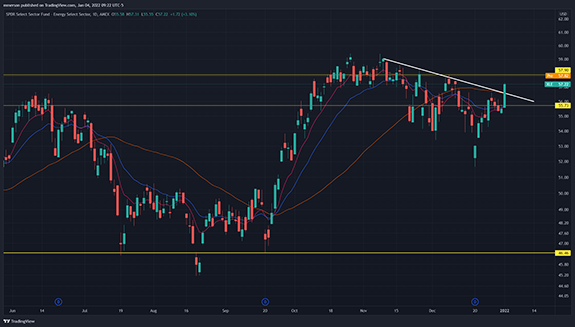 Leave it to Mike Carr to point out the bullishness of the energy sector the same day I noticed this huge green candle on the daily chart.Yes, with Mike covering the macro picture for us, allow me to dive into the technical picture and see how well it aligns on the SPDR Energy Select Sector ETF (XLE).We’re sticking to the basics today, just my favorite moving average stack of the 9-day EMA, 20-day EMA, and the 50-day MA. But we also have the help of some longer-term horizontal support/resistance lines to show us where XLE could go.Right now, XLE looks to be breaking its recent downtrend on the daily chart, with the premarket levels pointing to an even higher open, right up against the yellow resistance line at around $57.82.At the same time, the shorter-term EMAs are gunning for the longer-term 50-day MA, after the price has consolidated under that line for the past month.I think if XLE closes strong today, we could be seeing the beginning of a trend change. My money’s on higher XLE prices for the next couple months.Regards, 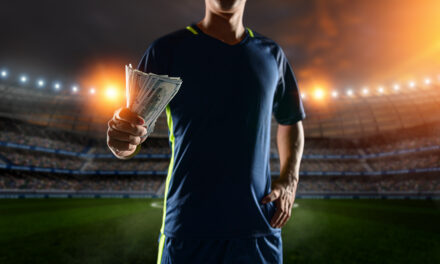 Add THIS Industry to Your Portfolio for Max Growth 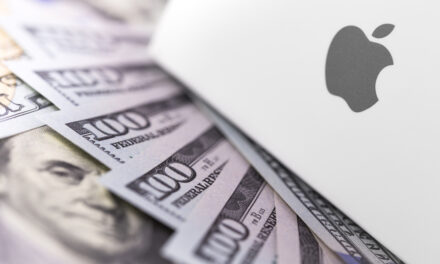