Home » Investment Opportunities » The Deal of the Century: Saudi Arabia to Sell Saudi Aramco in IPO

The Deal of the Century: Saudi Arabia to Sell Saudi Aramco in IPO

Saudi Arabia plans to sell up to 5% of the state oil company, Saudi Aramco, in an initial public offering (IPO).

Officials in the kingdom hope the deal values the company at $2 trillion. At that price, the sale adds $100 billion to the government’s cash flow, money it needs to fund its operations.

The chart below shows the best way to benefit from the listing. 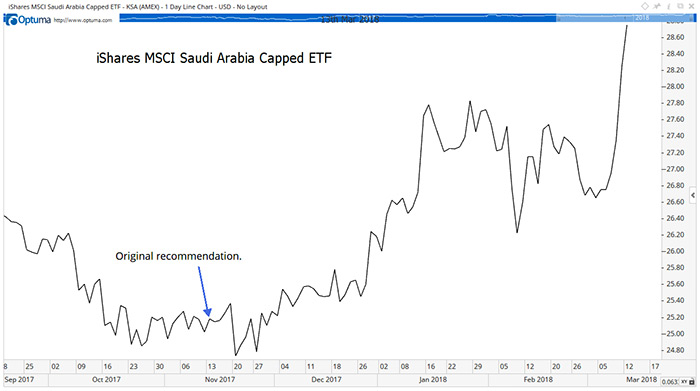 That’s a chart of the iShares MSCI Saudi Arabia Capped ETF (NYSE: KSA). I wrote about this ETF last November as the price was bottoming. KSA is up more than 15% since then, double the gain of the S&P 500 over that same time.

The Saudi government ran into some challenges as it pushed Aramco to the market. The world’s biggest stock exchanges could expose the kingdom to legal problems.

A New York Stock Exchange listing exposes Saudi Arabia to the U.S. court system. Activists could sue the company for contributing to global warming, as they did with Exxon Mobil. The kingdom could also face lawsuits related to sponsoring terrorists. The reality is that in America, anyone can sue anyone else.

While prestigious, a New York Stock Exchange listing is unlikely because of those risks.

London is the logical next choice. But listing in the United Kingdom requires detailed financial disclosures that government officials might want to avoid.

Aramco is considering listing in Hong Kong, but the best choice for the secretive company is to list in its home country. Unfortunately, that market might not be big enough.

Saudi Arabia’s stock market is worth about $475 billion, according to analysts. Aramco would boost that by about 20%, so it is possible to list the stock there.

On an average day, volume averages about $1.6 billion on the exchange. Aramco would more than double that.

But the local exchange offers the quickest path to raising $100 billion. That means index funds will need to pour billions of dollars into other Saudi stocks to buy Aramco. And that brings us back to KSA, the exchange-traded fund available to investors in the United States.

If the market cap of Saudi Arabia’s stock exchange increases, the value of KSA goes up. Gains could top 20% in this ETF by the end of year.