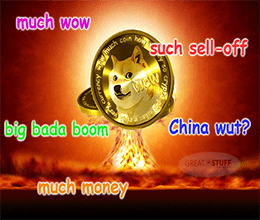 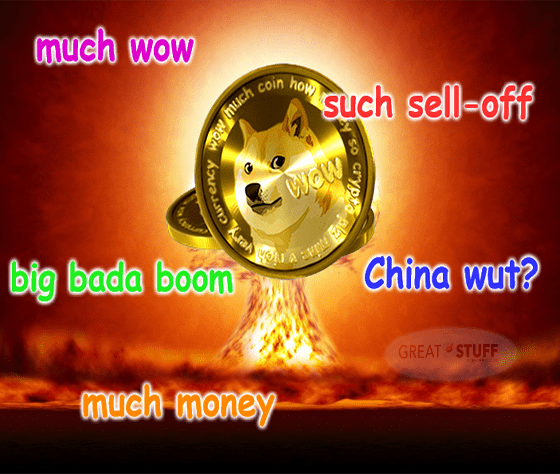 Yeah, this is a story of a famous Doge (DOGE). For the investor that chases the doge will be dizzy.

Doges of the world tried to unite, but the 2021 crypto market is funkier than George Clinton.

Cryptocurrencies were already under pressure this year, plagued by resistance from global governments and inflationary concerns. But the past couple of weeks saw that pressure escalate exponentially.

The latest round comes from a perennial crypto skeptic: China. Over the weekend, the People’s Bank of China “encouraged” Alipay and other financial institutions to crack down on cryptocurrency trading.

The new Chinese crackdown pushed bitcoin below $30,000 for the first time since April and sent dogecoin spiraling more than 25% lower.

By the way, if you want to see just how unscrupulous the financial media can be … just look at this headline from CoinDesk:

Comparing a NASCAR crash to a dogecoin sell-off?

Now that’s crass. I mean, y’all know I have a dark sense of humor at times … but even I wouldn’t go there. Luckily, the driver wasn’t hurt.

Back to cryptos… There are two rules to remember when investing in cryptocurrencies:

1. Utility: Cryptocurrencies like bitcoin are traceable, exchangeable and not tied to any government.

Bitcoin has both utility and scarcity in spades. Doge on the other hand … well, it might get there eventually.

When it comes down to it, I stand by my statement on Doge from last month:

As for bitcoin? Well, now, that’s a crypto of a different color. As 18th-century British nobleman Baron Rothschild once said: “The time to buy is when there’s blood in the streets.”

There’s a reason this quote is one of Warren Buffett’s favorites. The time to buy bitcoin is now.

But maybe you don’t trust good ol’ Mr. Great Stuff. Maybe I’m a bit too weird or too uncouth for “serious” investors.

Why must I be like that? Why must I chase the cat? Ain’t nothing but the doge in me.

OK, fair enough. But with other cryptocurrencies following bitcoin lower … we’ll likely never see a better buying opportunity than right now. This is the kind of setup investors dream about, and it’s exactly why Ian King re-released his special event, Next Wave Crypto Fortunes.

A professional investor, 20-year veteran of Wall Street and former hedge fund trader, Ian has been called the “King of Cryptos” — and for good reason.

Go here to see why Ian’s new cryptocurrency picks could hand you 12 times your money in the next 12 months. 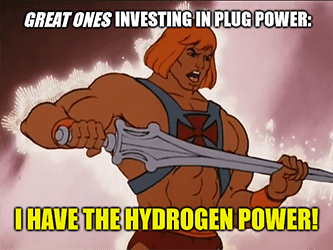 The rally has Great Stuff Picks readers sitting on a gain of more than 115% — well, those who got in when I recommended the stock back in October, that is.

Fresh off restating its financials, Plug reported a loss of $0.12 per share on sales that soared 70% to $72 million. Wall Street was looking for a smaller loss of $0.08 per share on lower revenue of $69 million.

So, we have a well-capitalized alternative energy company with seriously impressive growth prospects. And … yes, there’s another “and” … PLUG stock is trading at about half its all-time highs. That means a potential 200% gain for Great Stuff Picks readers or a potential 100% gain for anyone buying in now.

Though … you might want to wait for a brief consolidation of today’s gains before you dive in. You know, if you’re a penny-pincher and you want a slightly better price.

Congratulations, Great Ones, and hang in there!

The Bad: Going After Google 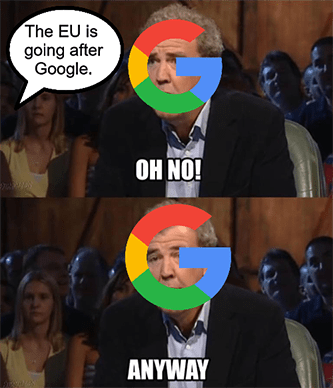 What’s a new week without a fresh slate of antitrust issues?

Alphabet’s (Nasdaq: GOOGL) Google was hit with a new antitrust investigation from the EU.

This time, the probe looks to find evidence that Google abuses its big-dog status to muscle around smaller advertisers and publishers on its platforms.

My initial reaction is: “no duh.” I’ve harped on Google’s more-than-obvious antitrust practices since I started writing this rag.

My second reaction is … what will actually come out of these investigations?

Another wimpy dimpy fine with no real regulatory action? Oooh, Google’s a-shakin’ in its boots.

The cracks in Google’s business have shown for some time now, but no antitrust suit has been able to break the ice just yet. I mean, the EU just fined Google just $1.7 billion in 2019 over, you guessed it, “stifling online advertising competition.”

This time around, the EU’s supposedly looking deeper into Google’s ad practices that have so far eluded regulatory scrutiny — such as advertising dominance across the YouTube platform.

EU antitrust investigators want to see if Google is making it impossible for other digital advertisers to compete in the same space. How? By restricting the flow of third-party data. This should come as no surprise — we all knew Google’s greedy about your online data.

The question is: What’cha gonna do about it?

It doesn’t matter that the EU has hit Alphabet with “record fines” in the past … you’re just slapping the wrist of a bigger and bigger fish! Sure, it can brag about giving Google a $5 billion fine back in 2018 … but what good does that even do when Google’s making $147 billion a year from its advertising monopoly?

GOOGL shares barely budged today, and it should tell you something when even GOOGL investors think another antitrust probe is nothing new in the neighborhood. 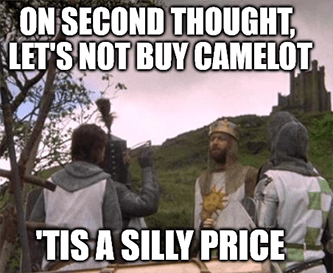 Great Ones, do you remember back a couple of weeks ago when I warned that Wall Street capital investors were “gobbling up entire neighborhoods?” And that “newlyweds, first-time homebuyers and retirees are not just bidding against each other … they’re also now bidding against Wall Street?”

Well, we can add another log to the growing dumpster fire that is the U.S. housing market.

Home Partners owns and rents more than 17,000 homes in the U.S., but it’s a bit different than most home-rental agencies in that you can rent to own your home.

I won’t get into the financial suicide that is the rent-to-own market — that’s a whole other rant entirely — but Blackstone’s $6 billion acquisition of Home Partners is yet another brick in Wall Street’s growing U.S. housing market portfolio.

That’s all fine and dandy … for now. But what happens when housing prices begin to decline? Lumber prices are already falling as more production comes online after the pandemic. Housing prices are sure to follow as homebuilders ramp up production.

And if Blackstone can’t recoup its investment, what’s to stop it from ditching those houses to limit losses … and exacerbating problems in the housing market?

Don’t worry, BX investors. Blackstone will be fine. The value of your home, however…

Lego people scream as a narrator describes hyperinflation, where prices increase at uncontrollable levels, before they’re reassured that the Fed’s got things under control. The final moments leave watchers with a sense of peace… — Catarina Saraiva for Bloomberg

Well well, look what y’all did.

Not you per se, but you know … people. The masses. America at large.

The financial media has all y’all so hopped up on inflationary fears … that the Fed decided the only way to break through the noise was with Lego. Wall Street’s talking heads freak out too much — bright yellow Lego heads offer more realism, which is sad.

Clearly, Great Stuff’s constant reminders and deep dives on unfounded inflation worries aren’t enough to stem the fearmongering. But Lego? Oh yeah, that’s what’ll click with the kiddies. And you thought the Lego Movie sequel was a dud — here comes Revenge of Inflation to round out the trilogy.

I do want to break from the sarcasm for a second and tell you I’m thoroughly enjoying the Fed’s videos here. Short, info-dense and I’ll admit: The Lego stop-action/animation truly seals the deal. (Economics teachers, take note.)

So, the Fed’s repeatedly said to not worry about inflation. We’ve argued as much about a bajillion times (to be precise). And now, a bunch of Lego city denizens have deflated inflationary fears on behalf of the Fed (again).

My only thought is, what will it take for Wall Street to get the message? To stop whipsawing you with headlines fearing the inflation reaper? You tell me.

Anyway, if you’d like to check out the Fed’s inflation guide videos — and why wouldn’t you? — click on the image below so you too can feel the same “sense of peace” that the Fed’s plastic minifigure minions want you to feel: 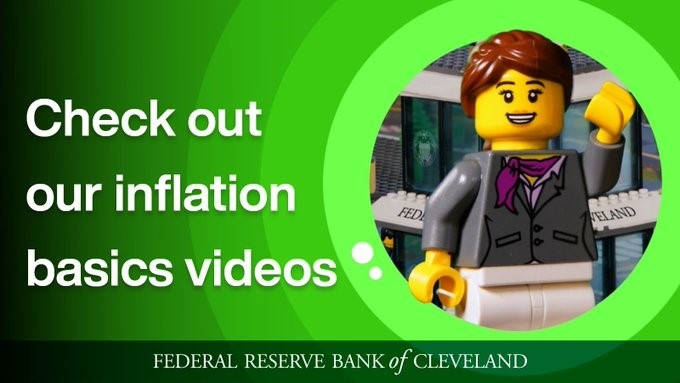 And with that, we turn it over to you!

What are your thoughts on Google’s constant time in the antitrust limelight? Were you able to get into our trade on PLUG? How do you feel about Lego interpretations of the inflation conversation? Do you have strong thoughts on the long-term scaling of Lego piece prices? 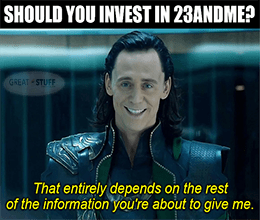 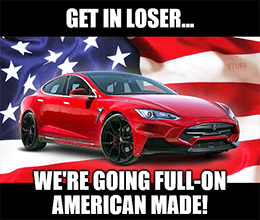