This Unloved Sector Is Set to Rally 20% This Year

It’s no secret: I expect the stock market to rally in the second half of the year.

In fact, I have said the S&P 500 could rally double-digits from here.

Well, today, I want to let you know which sector is the one you want to own.

This is important because we’re not going to see a straight shot higher — this is going to be a volatile second half of the year.

But amidst this volatility there’s one sector that will stand out amongst the others.

It has been unloved since the start of the year. It sold off along with the rest of the stock market during the latest correction, but it is the one sector that has failed to bounce back at all.

That’s about to change. Here’s why…

A Steady Group of Stocks

The consumer staples sector isn’t one we generally think of as being unloved. It’s typically a steady group of stocks that go back as much as a century in their respective fields.

These stocks also tend to follow the market, at the very least.

But since the latest stock market correction, it’s a sector that has failed to recover, and is actually down more than it was during the correction.

That represents an opportunity when you understand one simple concept about the major sectors of the market — there is always a rotation.

It’s a concept I have talked about before, and have been studying for years now.

Over and over again, one thing is certain: Stocks rotate around the S&P 500 Index in a predictable fashion.

The graphical representation is in the Relative Rotation Graph™ (RRG) concept. I’ll keep it brief today, but if you want to read more, click here.

Basically, it looks at the relative performance of a stock or sector compared to the S&P 500, and adds a momentum indicator to that. This shows that stocks or sectors rotate in a predictable fashion of moving from lagging the S&P 500, to improving, then leading, and eventually weakening again to fall back to lagging — and then do it all over again.

This is the rotation that occurs in the stock market.

And right now, the consumer staples sector has drifted a significant distance from the center, which represents the S&P 500. Take a look: 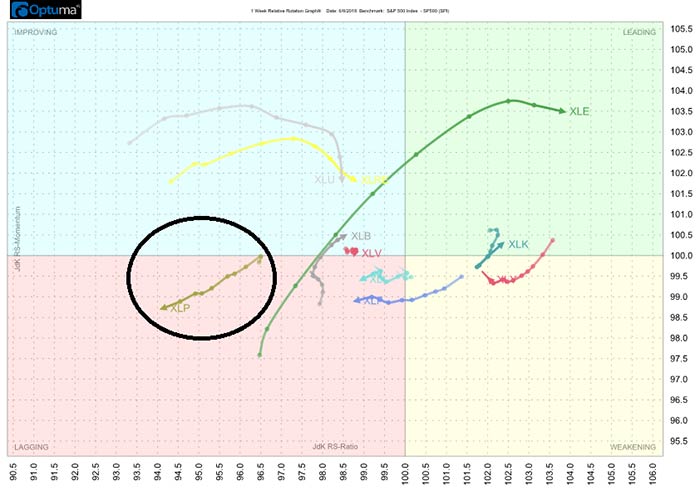 We can confirm this lagging segment for the sector by looking at a price chart of the sector itself. You’ll see it hasn’t participated in the rally the broader stock market has in the past couple of weeks. 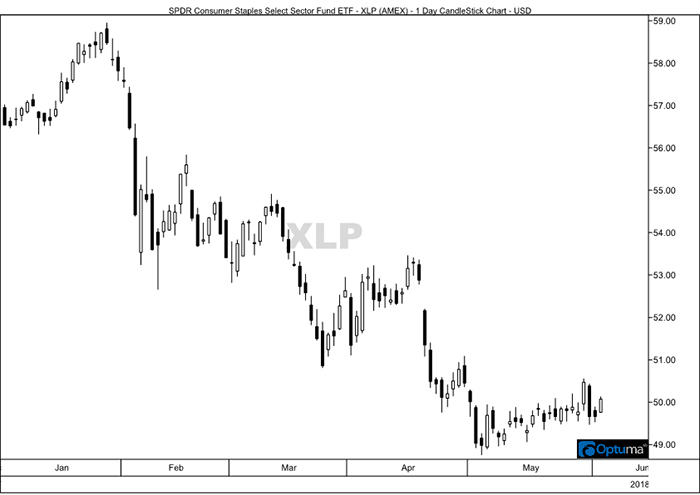 Looking at the RRG, the last time the consumer staples sector was this deep into the lagging quadrant was at the start of 2017 — the sector popped 10% over the next six months.

It hasn’t been there again in the last decade.

So it’s an extremely rare occurrence to see this much deviation between a usually stable sector and the broad market. And if history is any indication, we can expect the sector to see a big rally over the next six months.

I’m looking for a 20% rally as the sector makes its way back to its highs prior to the stock market correction — a very attainable level.

There are a few ways to play the rally.

You can pick a few stocks from the sector to outperform, which could see greater than 20% gains. Some examples include Procter & Gamble, Coca-Cola and Walmart, which I mentioned earlier in this article.

You can also grab a call option on those stocks, or the sector itself.

If the exchange-traded fund matches my 20% rally over the next six months, that would send the option up more than 300%!

Editor’s Note: Wall Street legend Paul Mampilly has been using a secret method for decades. In his own words: “It’s the easiest way to make big gains quickly, bar none.” Considering this method recently delivered a gain of 200% in just seven days … Paul is far from exaggerating. And in a landmark event at 1 p.m. EDT on June 12, he’s finally breaking his silence. During an invitation-only online broadcast, Paul will lay out the exact process of implementing his powerful method to book a gain every 23 days … while guaranteeing that this method can turn $5,000 into upward of $200,000 in the months ahead. This event is FREE to attend … but you must lock in your seat by tonight, June 11, at midnight EDT. To get full details and secure your access now, click here.