Home » Great Stuff » Come To The Dark Side, We Have Robux!

Come To The Dark Side, We Have Robux! 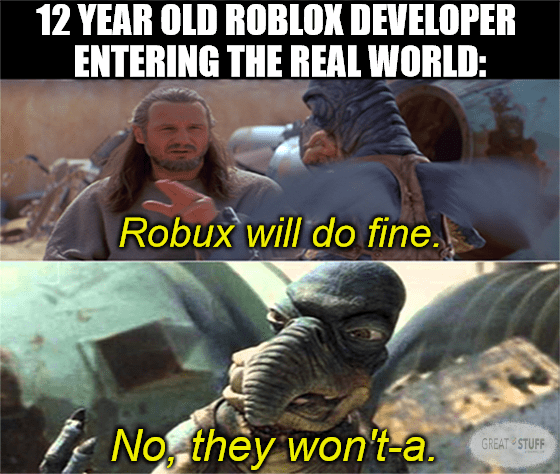 What’s The Deal With Roblox?

Great Ones, talking about Roblox (NYSE: RBLX) is not what I really wanted to do this fine Saturday morning. As I’ve said before, I don’t like RBLX stock and I really, really … really don’t like the company.

If I’m being honest, I’d rather make synthetic hairballs for ceramic cats … or practice turning my eyelids inside out. Both of these things sound more fun and productive than talking about Roblox.

But my disdain for a company/stock does not mean I shouldn’t cover it, especially when many of you are invested in RBLX stock … and my dislike for the company is more personal than monetary.

All right, let’s do this thing…

I’m not gonna lie, the sheer levels of growth within the company’s update were astounding:

That, Great Ones, is a veritable $^%&-ton of growth. Those numbers are very impressive. Activision-Blizzard and Electronic Arts wish they had these kinda growth numbers.

I, for one, am not surprised. As I detailed in the November 27 issue of Great Stuff — 5 Stocks To Rule The Metaverse — Roblox is probably the purest metaverse play on Wall Street right now. Suck on that, Facebook — erm, Meta.

Roblox operates an online, virtual entertainment space that’s exactly what experts describe when they talk about the metaverse. The company offers users the ability to play in virtual worlds and provides developers the means to create games and other entertainment experiences virtually online.

In the third quarter of 2021, Roblox users spent 11 billion hours on the platform.

So, what prompted RBLX stock to plummet 10%? Expectations.

You see, analysts were expecting Roblox’s DAUs to rise to 50.5 million in November, not 49.4 million. Wall Street looked at these numbers and came to the conclusion that, despite rising 35% year over year, Roblox’s growth was slowing … and users were moving away from the platform.

I think there’s another explanation for the slowdown. Roblox’s main users are aged 16 and younger, right? School starts back up in August (September for some), so there should be a slight expected dip in activity during the school season.

Meanwhile, November is about the time when exams, midterms, quarterlies, trimester exams, etc. start to crop up and students get serious about school heading into the holiday break.

It’s anecdotal, but this is how it would work in my house — if I let my kids play Roblox, that is. 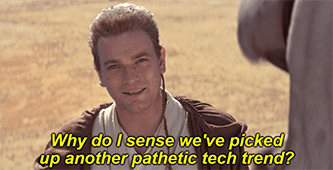 In other words, I think Wall Street’s 10% drubbing of RBLX stock based on this slight miss in DAUs is more than a bit absurd.

More than likely, investors used this blip as an excuse to sell RBLX stock amid an overall decline in the market due to COVID-19, inflation and Federal Reserve monetary policy concerns.

If you are a Roblox bull, the company’s November update was no reason to sell. In fact, the 10% drop was probably a great buying opportunity. ARK Funds’ Cathie Wood certainly thought so, as the ARK Innovation ETF (NYSE: ARKK) bought 334,691 shares of RBLX following the sell-off.

So, if you’re clamoring for anything and everything metaverse related, Wall Street just handed you a discount on one of the biggest metaverse plays on the Street right now.

If you’re into blissfully making money and investing without worrying about the potential social, legal or political consequences or fallout of a company’s operations … stop reading now.

There are two critical issues I’m about to cover that are probably gonna make you mad if you’re an investor just for the sake of being an investor. These are real concerns — especially for parents whose kids play Roblox.

But for these issues to impact Roblox’s stock price or business operations, it’d take action from parents, lawyers and/or politicians … which means they may or may not come to the forefront.

But if these two issues do gain traction … it’s gonna be very, very bad for Roblox.

If you want a more detailed rundown of both issues, you must watch the following two videos:

Now, on with the show:

It’s no secret that Roblox is aimed at kids. More than half of Americans aged 16 and younger have played the game. Roughly 54% of Roblox’s total user base is 13 or younger. But “played the game” isn’t the right way to describe what kids are doing on Roblox.

Sure, kids are playing games, or as Roblox calls them, “experiences.” However, they’re also developing, producing and selling these games. These are kids, by the way, putting in labor to produce games for Roblox.

Now, it’s one thing to monetize a kid’s hobby … but it’s something else entirely to use “build your own games and make tons of money!” as an advertising tool to encourage the creation of external companies that employ 13-year-olds.

I’m not one of those snowflakes who thinks kids shouldn’t be able to do some kind of work — if they want to and if their parents consent. I grew up working in tobacco fields at the ripe old age of 12. But I had lots of people looking out for me, both personally and legally. Roblox, meanwhile, does absolutely no monitoring on any of this. 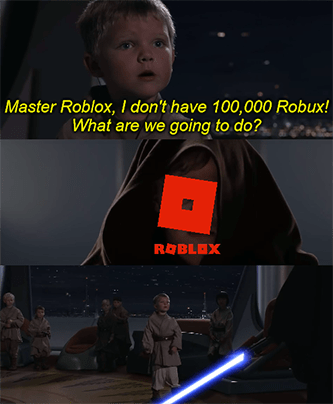 Furthermore, there are no rules or regulations for child programmers or working artists. There are no rules for working conditions for these Roblox kid creators, no limitations on hours, no controls on pay or any of the other things you would find in more public areas where kids work — such as the film industry, for example.

In fact, Roblox has carefully structured its platform to avoid any responsibility in this issue. And if it’s not happening directly in Roblox, the company pretends it doesn’t exist … despite promoting the fact that kids can make money making games on Roblox’s platform.

Oh, and about that money…

Let’s assume your kid makes a game that starts raking in the moolah on Roblox’s storefront. Roblox is gonna take a 75% cut of all sales. It’s Roblox’s platform, using its tools, its storefront and its resources … you provide the creativity and the labor.

And apparently, that labor and creativity is only worth 25% of the final product.

But hold on! You don’t get all $350 handed to you when you cash out. Roblox takes a 30% transaction fee when you convert from Robux to dollars. Because of this, many kids leave their money in Roblox to buy more stuff from the Roblox store.

I remember when coal companies used to do this kinda thing — creating their own funny money called company scrip. That stuff was made illegal under the Fair Labor Standards Act of 1938, but not before several rather bloody skirmishes during the West Virginia Coal Mine Wars.

Roblox Issue No. 2: Is Robux A Currency?

Speaking of money, anyone else find it interesting that Roblox has basically set up its own self-contained economy … complete with businesses, workers, storefronts and exchanges? It even has its own digital currency: Robux.

Legally, however, Robux isn’t considered a currency. If it was, I imagine the U.S. government would’ve already stepped in and shut it down. But then, even cryptocurrencies aren’t considered official currencies by U.S. regulating bodies. They’re considered collectible or investable assets.

The thing is, both Robux and cryptos function just like regular old fiat currencies — where they are accepted. There’s even an exchange rate for Robux to dollars and a Roblox-run exchange called DevEx.

Under current rules, Robux do not count as an official currency. This is true. However, as Roblox and the metaverse grow in size and user base, I can assure you that people in very high places are going to start looking very closely at Robux and other digital currencies. 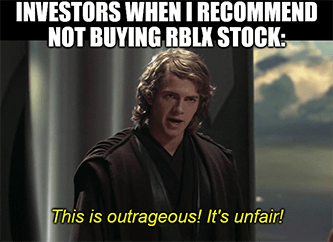 When you consider that Roblox sells 100,000 Robux for $1,000, but gives users only $350 for 100,000 Robux when they cash out … someone is eventually gonna have a problem with this exchange rate and complain.

At the rate Roblox external-developer companies are growing, those complaints are probably gonna come sooner rather than later.

The fact that those complaints aren’t already pouring in is probably due to the fact that the majority of Roblox developers are kids who don’t know any better.

(Forget Robux — let’s get you into some real digital currency greatness. Ready to enter the cryptoverse? Click right here!)

From my perspective, Roblox is operating in way too many legal gray areas.

Its main workforce is kids aged 13 or younger. Its payment schemes are sketchier than anything Google’s Play Store or the Apple App Store ever thought about doing. And Roblox may or may not be using illegal company scrip or an illegal currency.

If you’re a straight-up investor who doesn’t concern themselves with such social or ethical issues, Roblox is probably gonna make you a lot of money for some time. We all know it’ll take legal or political action to fix any of these issues … and we all know how long that takes.

Furthermore, the bigger Roblox gets as a company, the harder it will be to force any of these changes.

For myself, personally, however, I’m willing to leave that money on the table or put it somewhere else where it will make just as much moolah … without making me feel bad when the legal storm finally comes down.

In short, y’all can invest in RBLX stock as one of the premier investment ideas for the metaverse … but I’m not going anywhere near the stock until these issues are resolved. I said what I said.

Anyway, whatever goes on in the metaverse … we’ll need more effective methods of storing and analyzing the massive amount of data it generates.

Here’s the thing: We pretty much know nothing about most of the data in the world. In fact, 90% of the data that exists in the digital universe is “unstructured.” But thanks to companies like one small California firm … a refining process has come to light.

One small company with over 600 patents has an iron grip on this explosive mega trend.

And thanks for tuning in for this week’s Great Chat. Have a great rest of your weekend! 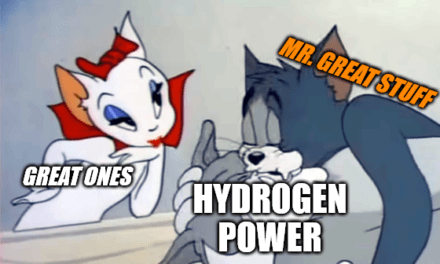 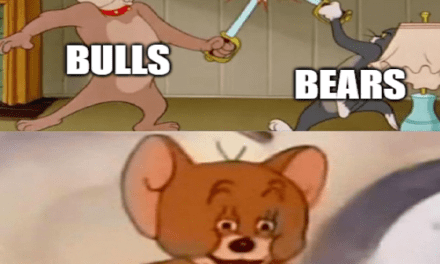