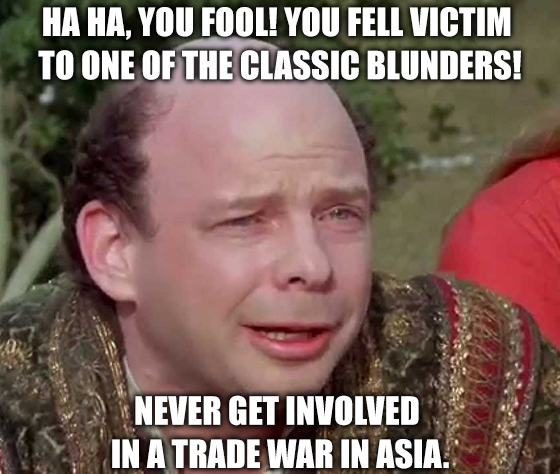 Fans of The Princess Bride know that the biggest classic blunder is getting involved in a land war in Asia. The second is betting against a Sicilian when death is on the line.

After the events of this morning, I think we really must add “trade war in Asia” to the list.

China announced today that it’s hiking tariffs on $75 billion in U.S. imports in retaliation to President Trump’s latest planned increase. China’s Ministry of Finance will roll out the first batch of these tariffs, a 10% hike, on September 1. The rest will be a 5% hike taking place on December 15.

The Ministry didn’t detail which U.S. imports would be affected.

In addition, China also said it was imposing 25% tariffs on U.S.-made vehicles and a 5% tariff on U.S.-made auto parts.

Great … now both cups are poisoned. Unlike the Dread Pirate Roberts, neither side has an immunity to this trade war … or iocane powder, for that matter.

I guess the fate of the U.S. economy (at least for the short term) is in the hands of the Federal Reserve.

Right now, the Fed is chillaxing in Jackson Hole, Wyoming, at its annual retreat. In his opening speech for the conference, Fed Chair Jerome Powell said that the Fed was “carefully watching developments” in the economy and was ready to “act as appropriate.”

That’s not exactly “As you wish,” but it’s as close as Powell is willing to get at this point. He’s shy, you know.

The more important aspect of Powell’s speech was what he didn’t say. The words “mid-cycle adjustment” were conveniently omitted. Wall Street took that as a positive sign, and the market pared early losses.

Shortly after Powell’s comments, President Trump shocked Wall Street by tweeting: “Our great American companies are hereby ordered to immediately start looking for an alternative to China, including bringing your companies HOME and making your products in the USA.”

It’s not quite clear exactly how Trump will carry out this order. What is clear is that the market tanked immediately following the tweet.

How’s that for an ending to this week?

No. 1: May the Salesforce Be With You

Don’t let all the doom and gloom get you down. There are bright spots in the market.

For instance, Salesforce.com Inc. (NYSE: CRM) shares are up sharply after the company’s beat-and-raise quarterly report.

Revenue soared 22% to $4 billion, while earnings came in at $0.66 per share. Both numbers topped the Street’s expectations.

What’s more, Salesforce boosted its full-year and third-quarter guidance past the consensus estimates.

This was a much-needed boost for CRM investors. Prior to earnings, the shares had dipped to their lowest levels of the year. Now, CRM is forming the back side of a cup-and-handle technical formation.

A cup-and-handle formation is one of those fancy patterns where a stock’s price action, when charted, resembles the shape of a “U” and the handle has a slight downward drift. These are typically bullish patterns. You can find out more by clicking here.

With this pattern, I would expect CRM stock to consolidate its gains after today’s rally and then move sharply higher as follow-through buying moves in.

In other words, don’t think you have to dive right into CRM shares today to get in on this rally. There will be a time early next week with better prices.

Intuit Inc. (Nasdaq: INTU) proved this morning that not all accounting is as boring as it seems.

The QuickBooks and TurboTax developer reported a beat-and-raise quarter, with 15% revenue growth and a narrower-than-expected fourth-quarter loss. Online sales were the biggest driver for Intuit’s bottom line, rising 35% year over year.

“Our business continued its strong momentum in the fourth quarter, resulting in full-year revenue growth of 13%, exceeding our original guidance of 8% to 10 % growth,” said CEO Sasan Goodarzi.

It’s all about cups so far today. (Sorry, Anna Kendrick, not those cups.)

INTU shares have rallied nearly 7% on the earnings news, pushing the stock to break out of its own cup-and-handle formation in extreme bullish fashion. The shares are now staring down $300, which is home to both technical and psychological resistance.

Psychological? Yes. Investors get skittish around round numbers, and automated buy/sell programs are often tuned in to these levels as well.

Look for INTU shares to rally to $300 on follow-through buying after today’s earnings report, then stall for a bit shy of $300. This could mean another period of consolidation for INTU, unless some other news juices the shares past resistance.

Are you ready for new iPhones?

The U.S. tech giant has plans for a new iPhone Pro, new iPads and a larger MacBook Pro.

The iPhone is expected to get a better camera and faster chips, while the iPad lineup will get an entry-level offering with a larger screen. The new iPhones will be dubbed the “Pro” line, replacing the current XS, XS Max and XR iPhones.

Upgrades to AirPods and Apple’s HomePod are also expected to make a showing.

I don’t know about you, but I’m missing that … “one more thing” with this new round of Apple upgrades.

Sure, product improvements such as faster chips and better cameras will excite the Apple faithful. But then, anything with an Apple logo on it excites those customers.

Where’s the product or improvement that’s going to threaten Samsung’s Galaxy lineup? Where’s the new innovation in the MacBook that will make PC users stand up and take notice?

Apple product launches used to be filled with these types of exciting revelations. Now, it’s the same as any other major tech company, offering incremental upgrades to existing product lines.

There has got to be something better that Apple can do with its hoards of cash than push slightly better cameras. Until it finds that “one more thing,” there are better tech innovators out there for your investment dollar.

VMware was already positioned as a major player in the cloud-computing market, providing multicloud support, applications and networking security. The addition of Carbon Black and Pivotal reinforce the company’s strength in that regard.

VMware investors are not taking the news well. VMW shares have fallen more than 8% on news of the dual acquisitions. It may well be “buying fatigue.” VMware already snapped up Bitnami earlier this year, a move that pressured VMW shares.

That said, VMware’s buying spree hasn’t had much of an impact on the company’s bottom line. Revenue has grown at a steady 11% clip, on average, this year. Earnings have also beaten Wall Street’s targets in each of the past four quarters.

Today’s drop has VMW shares trading near their 2019 lows. As such, this sell-off may be a blessing for VMW bulls, providing them a chance to add more to their holdings.