Will China Come to a Trade Agreement?

We gather around the table on Thursday for Thanksgiving. Opportunities like this — to live life together — are a gift.

We won’t always see eye to eye, but we come to the table.

Beijing and Washington, D.C. are not seeing eye to eye.

The trade war feels no closer to a resolution. The two countries derailed the recent Asia-Pacific Economic Cooperation summit. They disagree on trade policy and World Trade Organization reforms.

Trump has been tweeting optimistically. But will China come to the table?

This chart suggests it will — if for nothing more than its economic self-interest. 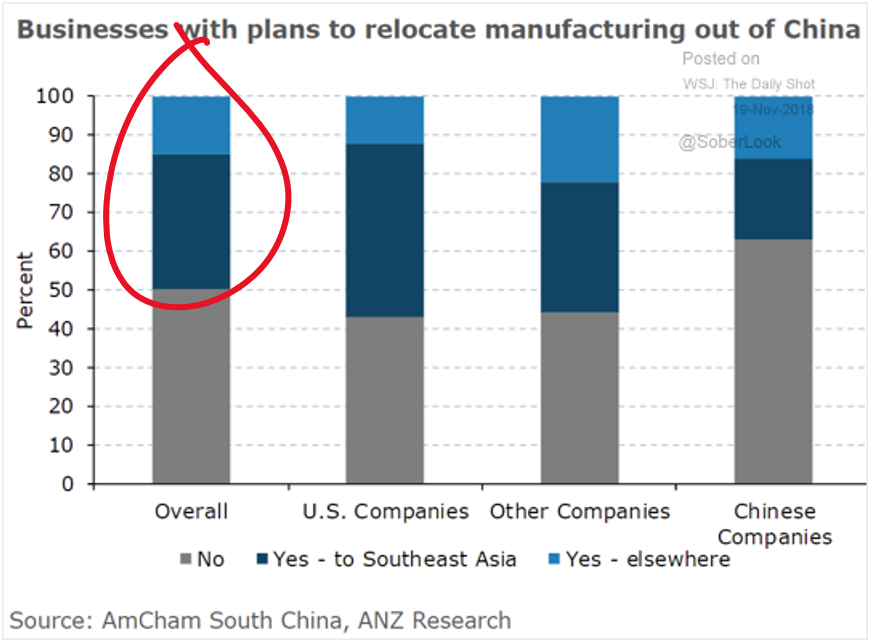 Fifty percent of manufacturing companies in China plan to move operations to other countries.

This complicates matters for the global supply chain. But it does not represent a systemic risk to the global economy.

It does force China’s hand.

Since the financial crisis, China has recognized the need to re-balance its economy. It was too dependent on exports and investment. It needed to empower Chinese consumers.

There has been some improvement, but the imbalances remain.

Exports and investment make up 60% of China’s economy.

An exodus of manufacturing companies will hurt both those categories. Manufacturing contributed almost 30% to gross domestic product (GDP) in 2017.

Chinese leaders can come to the table. They can swallow their pride and accept U.S. conditions for a trade agreement. This might let them continue re-balancing on their own time.

Or Chinese leaders can play hardball. But they’d have to prepare for an abrupt re-balancing as manufacturers leave.

To prepare, China can stimulate consumption. That means transferring wealth to households and reduce China’s exports market share of GDP.

It would reduce policymakers’ capacity to micromanage China’s economy. That’s something China’s central planners have been reluctant to give up.

So, China will find a way to cooperate.

And when it does, investors will be thankful.