Home » Big Picture. Big Profits. » China: The Party’s Over … in More Ways Than 1

China: The Party’s Over … in More Ways Than 1 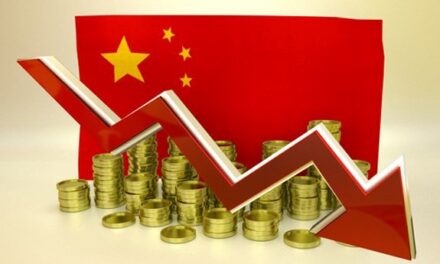 Recently I wrote in Bauman Daily about the importance of risk-adjusting your expected return on any investment. The higher the risk, the lower the risk-adjusted return.

Well, I’ll tell you what. I can write about risk-adjusted returns all day long, but it’s never going to save you from a chart like this: 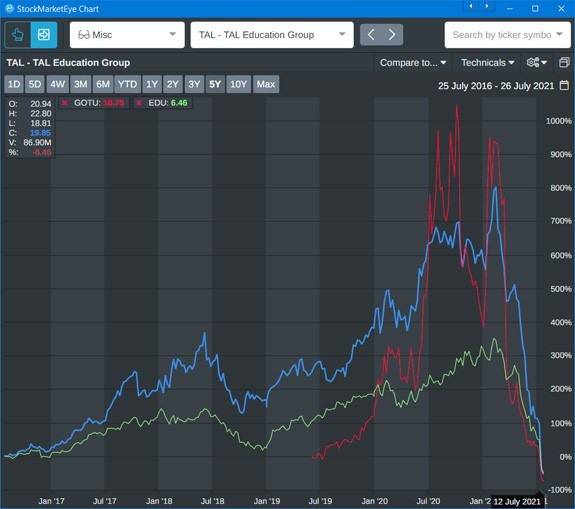 These companies sell tutoring services to parents of Chinese students. (The country’s Confucian educational system is as competitive today as it was under medieval Chinese emperors.)

The vast size of their potential market and rapid growth rates made these companies favorites with U.S. investors, who bid their prices to stratospheric levels.

Now it has all come crashing down.

All three companies have seen their share price collapse by nearly 90% over the last week.

At the stroke of a virtual pen, tens of billions of dollars of market capitalization — and U.S. shareholder wealth — have been wiped away.

The pen in question belongs to the Chinese Communist Party (CCP).

Not for the first time … and certainly not for the last … China’s rulers have gutted the business model of one of the country’s thriving, growing technology sectors.

The question is … why? Is it safe to invest in any Chinese companies?

The Politics of Power

As a student at the University of Cape Town in the 1980s, I studied 20th century revolutions. I also delved deeply into Marxist-Leninist political thought. It was popular amongst my more radical fellow students at that time of anti-apartheid ferment.

I learned that the most “successful” communist parties were led by people who had an acute understanding of political power dynamics.

Like Marx himself — whose analysis of the degeneration of the French Revolution into Napoleonic despotism remains a classic — Chinese communist leaders think in terms of what they call the “balance of forces” in society.

This is a much more sophisticated understanding of politics than the red versus blue horse-race stuff we see here in the U.S.

It’s based on an understanding that power has many sources. Having formal control of government is just one of them.

Playing Cat and Mouse With Capitalism

The CCP has employed this understanding of power to engineer massive changes in the last generation.

Starting in 1980, Chinese Premier Deng Xiaoping pushed through reforms that would allow capitalist enterprise to operate in what was formally a communist country.

Deng realized that communist control of the Soviet Union was in danger because it was unable to deliver rapid economic growth and technological progress. He knew if the CCP didn’t learn from that lesson, they too would be swept into the dustbin of history.

Arguing that “it doesn’t matter whether a cat is black or white, if it catches mice, it is a good cat,” Deng unleashed economic forces — and thus social and political forces — that have transformed China into the second-largest economy in the world: 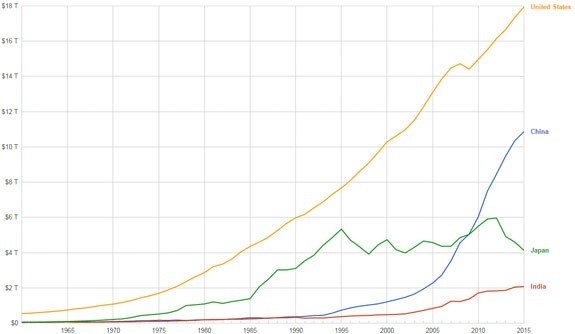 Late last year, Jack Ma, billionaire founder of e-commerce giant Alibaba (NYSE: BABA), gave a speech in which he criticized Chinese regulators for having what he called a “pawnshop mentality.” He accused them of not understanding the dynamics of a modern digital economy, or the power of leverage in modern finance.

Retribution was swift, decisive … and clearly intended as an object lesson.

Chinese authorities deep-sixed the initial public offering (IPO) of Ant Financial, an Alibaba spinoff. Ma disappeared for several months. Older Chinese who lived through the Cultural Revolution knew this was a sign he was being subject to “reeducation.”

Alibaba’s share price — the source of Ma’s personal wealth — began a cascading collapse that continues to this day: 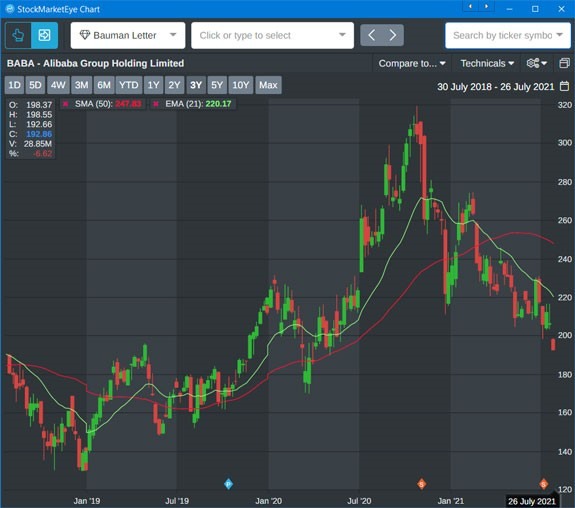 But that was just the beginning.

In April, the CCP called Founder Wang Xing of food-delivery giant Meituan (3690.HK) to an “informal guidance meeting.” He had published a Tang Dynasty poem interpreted as critical of the government.

Subsequently, regulators announced an investigation into the treatment of the company’s delivery drivers. This was the result: 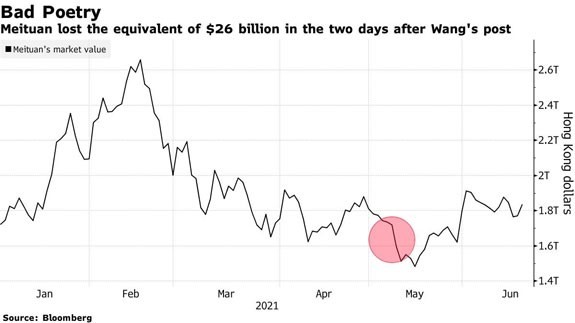 Two days later, the Cyberspace Administration of China said it had launched an investigation into DiDi “to protect national security and the public interest.” The government also “asked” DiDi to stop new user registrations during the investigation.

Some analysts inferred that the CCP was wary of allowing another company to get too rich. But money wasn’t the problem.

Early in July, Chinese state media published an article showing that in 2015, DiDi had used user data to compile an internal report showing that traffic around Beijing’s Ministry of Public Security was always busier than near its anticorruption agency. That cast a bad light on the government’s priorities.

The implication was clear: The CCP would not allow independent sources of data intelligence to exist within China.

The destruction of the online tutoring industry reflects another subtle understanding of power.

Many Chinese parents are bitterly angry that kids whose parents can afford online tutoring have a better chance of passing China’s notorious university entrance exams.

The CCP’s hold on power depends on maintaining the illusion that there are no class divisions in China. By calling that illusion into question, the online tutoring industry sealed its fate.

When President Bill Clinton sought China’s admission to the World Trade Organization in the mid-1990s, he argued that capitalism would inevitably lead to political liberalization in that country.

He was dead wrong, of course.

Under Premier Xi Jinping, the CCP is reminding everyone — from domestic tycoons to Wall Street investors — that the Party is the only permissible source of political power in China.

It is willing to disrupt or destroy any industry to keep things that way.

I’ve come to believe this is a risk that cannot be “adjusted” for. 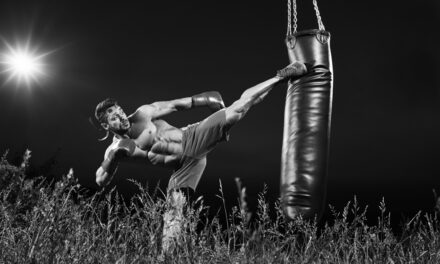 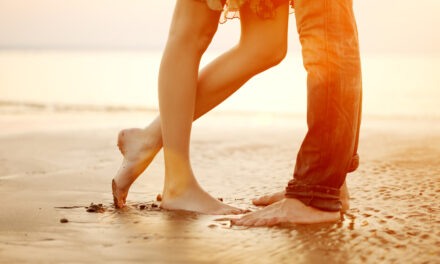 Summer Swoon or Not?