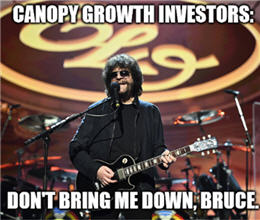 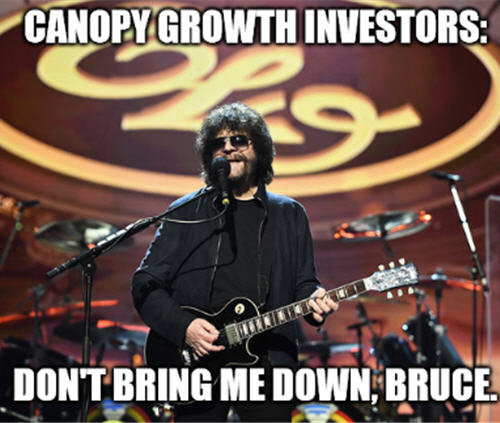 Canopy Growth Corp. (NYSE: CGC) has investors running, going out of their minds.

Investors are thinking that they’re wasting their time.

If you haven’t heard, I’ll tell you once more before I get off the floor.

Canopy Growth co-CEO Bruce Linton is out the door.

In a press release bright and early this morning, the world’s largest pot company by market cap announced that Bruce was removed … effective immediately.

The now-former CEO (and former board member) called into CNBC shortly thereafter to dispute the turn of events.

“I think stepping down might not be the right phrase,” he said. “I was terminated.”

“I really think at the end of the day, sometimes entrepreneurs are entrepreneurs because they’re not super employable,” Linton told CNBC.

I think you may have hit the nail on the head, Bruce. One of these days, you’re going to get it right.

Until then, don’t bring me down, Bruce.

Something was bound to happen at Canopy Growth after last quarter’s big miss. Constellation Brands had to bring down the hammer. When you invest $4 billion in something, you have to throw your weight around when things go wrong.

This is actually a fairly light touch from Constellation. It maintains confidence in Canopy while declaring in no uncertain terms that something has to change now. It could have been worse.

But the cannabis market has entirely too much potential, and Canopy is the biggest player in that market right now. As such, investors shouldn’t fret too much about Bruce’s departure. In fact, this dip in CGC shares might be a buying opportunity.

But if you’re looking for big returns in the cannabis market, you really need to invest in the No. 1 marijuana stock of 2019. Click here to find out more. 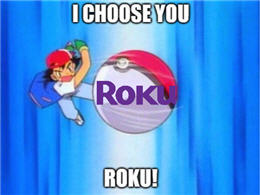 Among streaming devices, Roku Inc. (Nasdaq: ROKU) is a god.

According to a recent report from research firm Strategy Analytics, 30% of all new streaming platforms sold in the U.S. last quarter were Roku-based.

That means that Roku now controls about 41 million streaming devices across the country. (At least four of those are in my house right now.)

But … but … what about Amazon.com Inc.’s (Nasdaq: AMZN) Fire TV? Despite the fact that Amazon is all but giving away Fire TVs, the devices only represented about 12% of sales last quarter.

Samsung’s Tizen (which I’m sure all of you have heard of, right?) was a close third at 11% of devices sold.

In fact, Strategy Analytics reports that the Fire TV isn’t even in the top five most popular devices. Roku is followed by Sony’s PlayStation, Microsoft’s Xbox, and Samsung and Google’s Android TV with built-in Chromecast.

Roku is indeed the god of cord-cutting right now. It’s no wonder ROKU shares are up more than 180% this year.

Better: Laugh It Up, Fuzzball 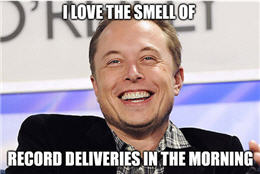 Tesla Inc. (Nasdaq: TSLA) CEO Elon Musk has to be laughing all the way to the bank this morning.

I mean, assuming people still go to the bank … there are so many apps these days.

Today, Tesla made good on its promise of record vehicle deliveries, dropping 95,200 units in the second quarter.

The figure topped even the most bullish estimates, sending analysts scrambling to send out bullish research notes.

Musk had been trying for months to convince investors that demand is still strong for Tesla cars, despite repeated concerns from the brokerage bunch. Tesla just blew those forecasts out of the water, and TSLA shares are up sharply on the news.

Best: Norton Hears a Who

These are words I never thought I’d type. The “best” stock of the day is Symantec Corp. (Nasdaq: SYMC).

Apparently, Broadcom Inc. (Nasdaq: AVGO) is in advanced talks to buy SYMC. Analysts are speculating that the deal could be in the $26- to $28-per-share range for Symantec.

Let me just say that this deal makes no sense to me. Nobody in their right mind uses Norton AntiVirus products (Symantec’s big product line). Just google “Is Norton a virus?” or “Is Norton malware?” and you’ll see what I mean.

What’s more, Norton itself said back in 2014 that antivirus software is dead. The point is that antivirus databases are always out of date for the latest threat.

Symantec itself is struggling with management turnover and falling earnings. So, why would Broadcom buy Symantec? Your guess is as good as mine. Maybe that’s why AVGO shares are down nearly 3% on the news.

SYMC investors are having a field day, though. The stock is up more than 14%. I’d say take those gains and run with them. Run far away. 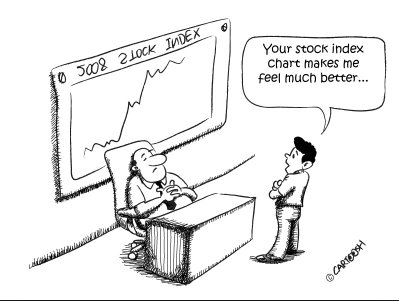 Just check out all the nice things subscribers have to say about Banyan Hill expert Paul. He’s excellent at getting you through market rough patches and making you gobs of money at the same time. 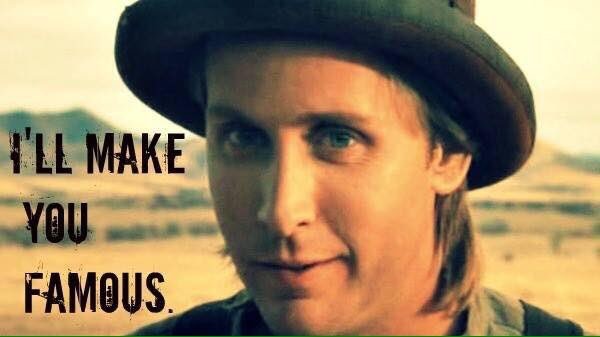 Want to see your quote in an edition of Great Stuff?

Send me your great stuff! Market memes, snide remarks, stock tips … the sky’s the limit. (But no profanity, please. We can’t publish that s%*& here.)

Drop me a line at GreatStuffToday@banyanhill.com, and, if you’re really lucky, your wisdom could end up immortalized in the Great Stuff e-zine. 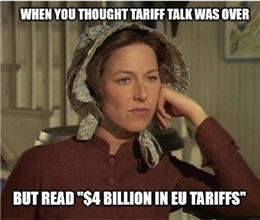 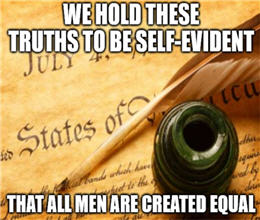 Celebrate Your Freedom This Fourth of July