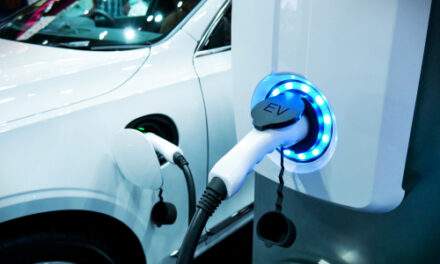 With energy prices rising, electric vehicle bulls are expecting increased sales.Their argument sounds rational. With an EV, you never have to buy gas. So higher gas prices will eventually push consumers to EVs.This dynamic could eventually create more demand for EVs than there is for gas vehicles now. Follow that path long enough, and you get to a place where the demand for EVs gets so high, gas prices actually start to fall.There are a few problems with this line of thinking that we’ll dig into today. The way I see it, EV bulls may need to temper their expectations for such a swift revolution in how people think about transportation…

To begin, let’s consider how much gas prices affect driving behavior.The relationship is shown in the chart below.

The blue line is the total miles driven as reported by the Federal Highway Administration. The red line is the price of gas, and values for that are shown on the right scale. That’s the national average as reported by the Energy Information Administration.There is a weak correlation. Sometimes, when the price of gas rises, the number of miles driven falls. Because the dips in miles driven are rather small, that more than likely shows the strain higher prices place on average families.Even if gas is expensive, families still need to get to work, shop at stores, and transport children to widespread activities. Higher prices may force planning to consolidate some trips, even if it’s less time efficient. An example might be putting two or three kids in the car at once rather than making separate trips.If gas prices double, that may force even more thinking about whether or not to drive somewhere.Now, let’s turn back to that EV question and reframe it…

Teslas Aren’t Practical for Families on a Budget

If fewer miles are driven when gas goes up by $3 a gallon, will families forced to change their budget trade in their gas guzzler for an EV?I believe the answer is an unequivocal no.The burden of higher gas prices falls disproportionally on lower-income households. One study found, “Many of the lowest-income U.S. households spend nearly one-fifth of their income on gasoline — three times more than the average U.S. household.”These families aren’t in a position to buy a new car, let alone a new Tesla.Even if they did buy a Tesla, the expenses don’t stop at the initial purchases. Despite what EV bulls would have you believe, the total ongoing costs of owning a Tesla over five years are among the highest of any car manufacturer.CarEdge ranked the costs of owning a Tesla number 25 out of 32 brands. While Tesla is slightly cheaper than a Lincoln or Audi, it’s more than twice as expensive as a Mitsubishi.In other words, the savings on gas won’t always offset the higher price of the car, the installation of charging outlets at home and the cost of electricity. That’s not to mention insurance, financing, and regular maintenance and repairs.EVs aren’t practical for many families living outside cities, as I recently explained. They also aren’t practical for many families living on a budget.For now, EVs are a plaything of the top-income quintile and an aspiration for Millennials making plans to splurge after they pay off their student loans.Higher gas prices will crush the bottom two income quintiles. That’s an academic way of saying almost half the country will have to make sacrifices rather than buy an EV as prices rise.Regards, 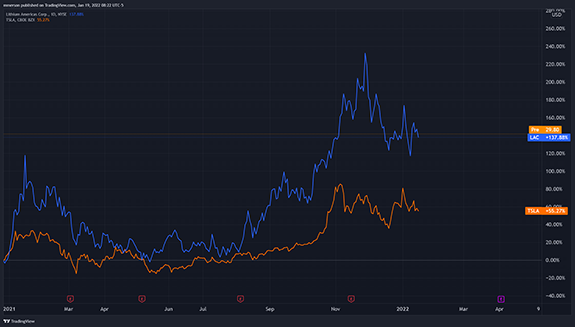 If I asked you to name a stock that’s outperformed Tesla over the last year, the question might stump you.TSLA put on quite a show and grabbed plenty of headlines. It rose as high as 85% throughout the year, before giving some gains back to return a modest 80%.(Bear in mind, a stock like Tesla adding 80% in a year is quite the capital-vacuum. That equates to roughly $400 billion in value added to the pioneer EV maker.)However… Another stock, closely related to Tesla but certainly no household name, returned nearly 3 times as much.That stock is Lithium Americas Corp (LAC).If you’ve kept up with our Sunday Options Arena series, you know that Amber thinks LAC is a leveraged play on Tesla.That clearly isn’t just a theory. While TSLA stole the headlines last year, LAC quietly did much, much better. And if the EV trend continues accelerating, as it likely will, LAC is primed to continue outperforming EV companies.Full disclosure, I own quite a few shares of LAC and plan on holding them for the long haul. If you think EVs aren’t going away as Amber and I do, you might consider doing the same.Regards,