That’s the day Lehman Brothers failed, and the U.S. Federal Reserve unleashed the most massive money printing of all time.

That’s shocking enough. What’s even more shocking, though, is that, in the nine years and seven months since the system cracked, nothing has been done to fix it.

Instead, the U.S. and every major country of the world have been trapped in an endless cycle of government deficits and money printing to finance them.

Hard to believe? It shouldn’t be.

The proof is at your fingertips. You can find it almost everywhere. 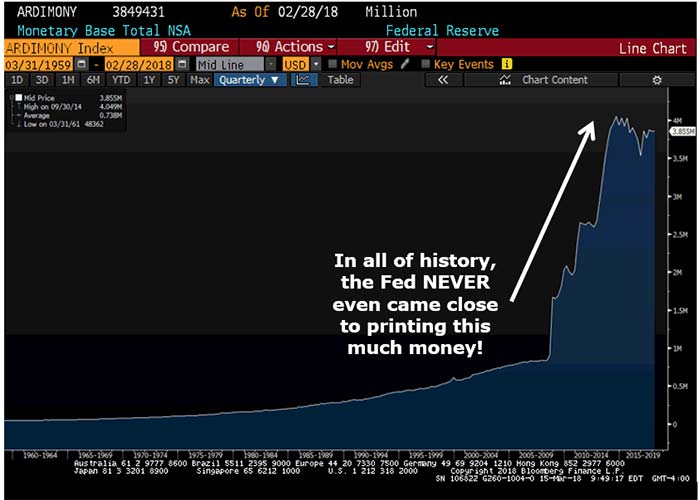 Consider our first chart, for example. It’s readily available on every Bloomberg terminal in the world. It shows exactly how and when the Fed unleashed unbridled money printing. And it’s exhibit No. 1 of a broken financial system.

Like I said, it began on September 15, 2008. It continued year after year. And there has been zero progress so far in reversing it.

In all of history, the Fed never even came close to printing this much money

The second chart (below) shows the logical consequence of the Fed’s unprecedented behavior, the natural corollary to the prior chart:

Never before in all history did the Fed keep interest rates this low for this long! 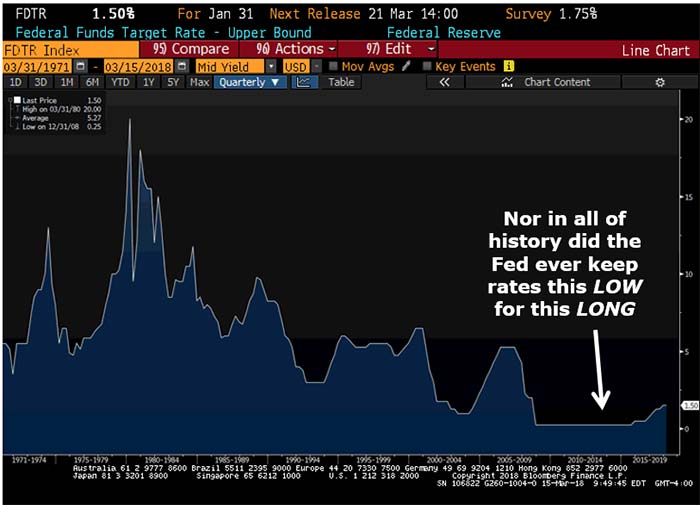 This broken system is obviously unsustainable, and yet the authorities have perpetuated it for over nine years.

It’s Just a Matter of Time

This broken system could crack at almost any time, and yet, so far, it has not.

What will shatter the magic spell? When will the primary stakeholders — owners of U.S. Treasurys, U.S. dollars and trillions in other assets — rebel?

The quick answer could be: As soon as today, when they see what the new Fed chairman has done with interest rates and hear what he says about his next steps still to come.

The more thoughtful answer, however, is to recognize it’s just a matter of time.

It takes time for mega trends of this great magnitude to lose momentum, come to a complete stop, shift gears, turn around and then take off in an entirely different direction.

As we get closer to that fateful turning point, we’ll tell you more about what to expect, how to respond and even how to use the change as a major wealth-building opportunity.

For now, just be sure to play it safer. Avoid overinvesting in high-risk investments. Continue to build cash reserves. Then wait for our next update. 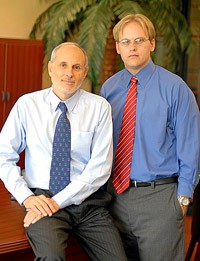 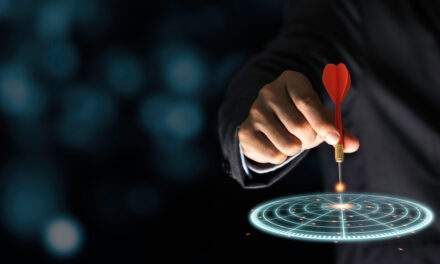