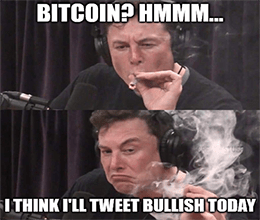 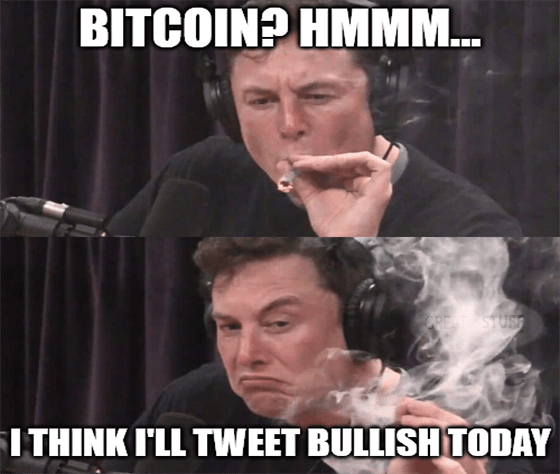 What A Field Day For The Street

There’s something happening with Bitcoin (BTC) here. What it is ain’t exactly clear.

There’s a man with Twitter over there, telling me I’ve got to beware.

I think it’s time we stop, investors, what’s that sound? Everybody look, what’s going down?

It’s true, Great Ones. As Tombstone’s Doc Holliday once put it: “It appears my hypocrisy knows no bounds.”

But at least I’m not as indecisive or as easily pressured as Tesla (Nasdaq: TSLA) CEO Elon Musk … at least when it comes to bitcoin and cryptocurrencies.

The latest drama emerged on Sunday when Sygnia CEO Magda Wierzycka — there’s no way I’m trying to pronounce that, you’re on your own — called Musk out on his relationship with bitcoin:

What we have seen with bitcoin is price manipulation by one very powerful and influential individual.

Them’s fighting words. Being a loudmouth is one thing, but market manipulation? That’s the kind of thing that gets the SEC involved. And it’s hard to deny, at least on the surface.

I mean, Musk announces that Tesla has taken a multibillion-dollar stake in bitcoin and that the company will start accepting the cryptocurrency and bitcoin surges in price.

Then, Musk walks back that statement, announced Tesla had sold its bitcoin and the crypto plunges.

And those are just Musk’s most obvious and coherent tweets on bitcoin. If you look deeper, you can find a whole slew of “bitcoin to the moon!” style tweets spewing from Musk’s Twitter account.

This is inaccurate. Tesla only sold ~10% of holdings to confirm BTC could be liquidated easily without moving market.

So, Musk is back in on bitcoin, but only if miners use clean energy … a condition that seems to put less responsibility on bitcoin miners and more on the power providers in their respective countries.

This is by far Musk’s weakest backing of bitcoin that I think we’ve seen, and it still resulted in a massive jump in bitcoin’s price. Wierzycka: mission accomplished.

Oh, and some guy called Paul Tudor Jones also came out on CNBC and said he’s really bullish on bitcoin:

Anywho … as I’ve said repeatedly before, this volatility is normal for bitcoin and cryptocurrencies in general. I would wager there would be a lot less volatility if Elon Musk would stop tweeting about it, but I don’t see that happening anytime soon.

An extremely rare profit situation is unfolding in the gold markets right now. The last time it showed up, investors had the chance to make truly exceptional gains as high as 4,558% … enough to turn $10,000 into nearly half a million bucks.

But for the reasons explained here, the window to get in is closing fast. Click here to learn more.

The Good: Chuffed To Bits 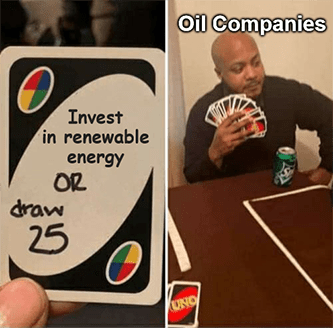 Great Ones, y’all know my relative disdain for oil companies. I mean, why pour money into a dying market? But … if I had to invest in a so-called “oil major,” it would be BP (NYSE: BP).

The company continues to move into alternative energy markets — most recently joining a Norwegian consortium to build wind power projects.

But while Norwegian wind is a feel-good story, the real news for BP lies in Iraq. According to The Wall Street Journal, BP is in the process of spinning off its Iraqi operations into a standalone company. This is truly a major development for BP — since the company has ties with Iraq dating back to the 1920s.

Proceeds from the spinoff are expected to be rolled into BP’s green energy efforts.

The Bad: How Are Ya Now? 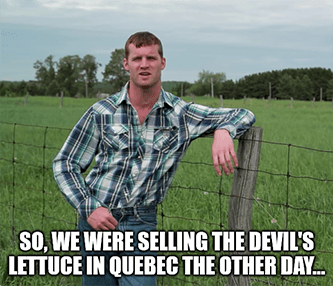 Norwegian wind is so hot right now. Canadian cannabis? Not so much.

Or, at least, pot stock Hexo (NYSE: HEXO) has either the wrong stash, the wrong market … or a bit of both. The company’s latest report was another dud in a series of duds — another seed exploding in the face of Hexo’s confidence.

According to Hexo, it’s all a cavalcade of bad timing: Sales in the Canadian cannabis market fizzled out amid the pandemic, counter to what you’d expect with everyone chilling at home.

Amid that decline, Hexo’s blaming “strain cultivation decisions” as another reason for languishing sales, along with “production issues relating to hash.” I mean … same here, but you don’t see us complaining about it…

At least Hexo isn’t trying to work in the chip shortage to its excuse list. Boss, they were all out of Doritos, sorry…

Then there’s the need for “revised prerequisite testing and an additional certification by the Israeli government” for its international medical cannabis sales … so no income there. What did Hexo even do this past quarter?

OK, Hexo has been snatching up smaller pot companies this year to help snowball its cross-Canadian clientele. But what good is that expansion if it leads to wider losses without much growth in revenue?

I’m worried that Hexo is a one-trick pony in Canada, relying too much on Quebec as its only real profitable market. The company’s pretty much struggling everywhere else: Even with non-Quebec sales rising 169% over last year’s admittedly minimal sales, that growth seems way too expensive if Hexo keeps posting losses.

Jeez, writing this, I feel like I kicked some poor Canadian’s hacky sack down the storm drain … sorry.

The Ugly: Oh Lawdstown, There They Go! 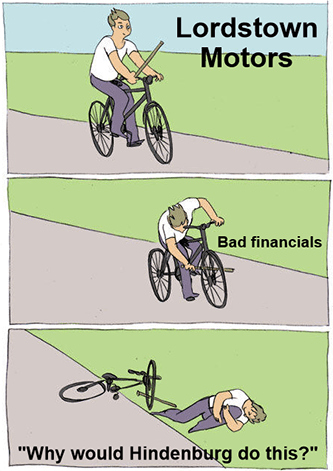 It’s a tale as old as time in the electric vehicle (EV) market:

Company goes public, but it has trouble making EVs.

Company admits there are issues, and leaders are burned at the stake — metaphorically speaking, of course.

Just days after Lordstown said it had “substantial doubt” that it will be around next year, the company’s CEO and CFO are both out the door.

Apparently, after conducting an internal audit, Lordstown’s board reported that the company “had overstated the quality of pre-orders for electric trucks.” However, the EV maker denied Hindenburg’s accusations that its technology wasn’t viable.

This sounds an awful lot like what went down with Nikola Motors (Nasdaq: NKLA) last year.

“We remain committed to delivering on our production and commercialization objectives,” now-acting CEO Angela Strand said in a statement.

I mean … of course, Lordstown remains committed. It wouldn’t have a business otherwise.

Assuming Lordstown has a viable working product and its technology is good, this purge could be good for RIDE investors … eventually. After all, the company still needs a cash infusion to remain viable, and a new CEO could give investors the confidence they need to pony up and keep the doors at Lordstown open.

RIDE plummeted nearly 20% on the news.

Welcome, welcome, you must be new around here!

Yes, the bonfire that was this past earnings season has died down to a few mere embers now. Hexo’s lackluster report (read: abomination) kicked off the week with a splash … more or less. So, let’s check out what other reports are slated for the week from Earnings Whispers over on Twitter: 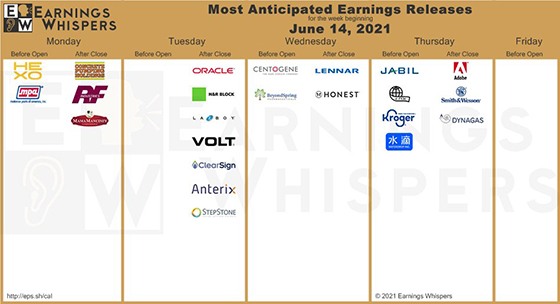 It’s been half a year since Goldman Sachs said that Oracle (NYSE: ORCL) would collapse due to “secular pressure” with its non-cloud software … after which Oracle rose 40% and posted tremendous earnings beats. (Analysts and their Stormtrooper-like accuracy … am I right?)

This time around, we’ll see if Oracle can keep the faith alive against so-called secular pressures — and how optimistic the company is about its foray into the cloud.

Elsewhere on the software seas sails Adobe (Nasdaq: ADBE), high and mighty. The king of subscription sales, there’s not much to expect with the Photoshop purveyor’s reports other than more of that sweet, sweet recurring revenue.

One company I’m 100% checking out this week is Lennar (NYSE: LEN). If you want the deets on the housing market, look no further.

The Street’s talking heads can say whatever they want about “housing rallies” this or “inflationary pressures” that. But homebuilders like Lennar are the ones actually laying foundations, framing houses and … whatever else they do.

Everyone’s looking for the real boots-on-the-ground info on the housing market and its supply and demand maelstrom. I want to see if Lennar is forthright about rising costs and their impact on earnings, even if that honesty is to the dismay of LEN investors.

Kroger (NYSE: KR) will be an interesting one to watch in the grocery space (well, if you find grocery interesting in the first place). Like the grocery sector’s Targets and Walmarts, Kroger is subject to similar shifts in consumers stockpiling, prepping and, more recently, summertime supply runs.

No doubt, the Kroger chain will see sales ebb from their lofty pandemic highs, but as we’ve seen, it’s how the Street reacts to reopening guidance that will make all the difference for KR investors.

What about you, Great Ones? What earnings reports are you most excited about this week? And what do you think about Elon Musk’s hot-and-cold relationship with bitcoin? Are Musk’s Tweets just lighthearted memes or market manipulation schemes? 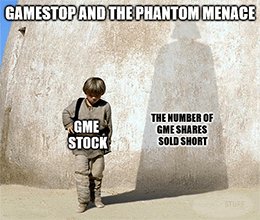 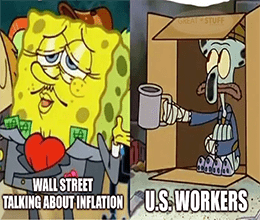