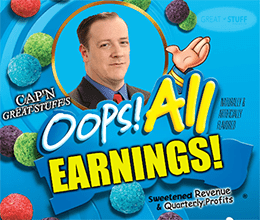 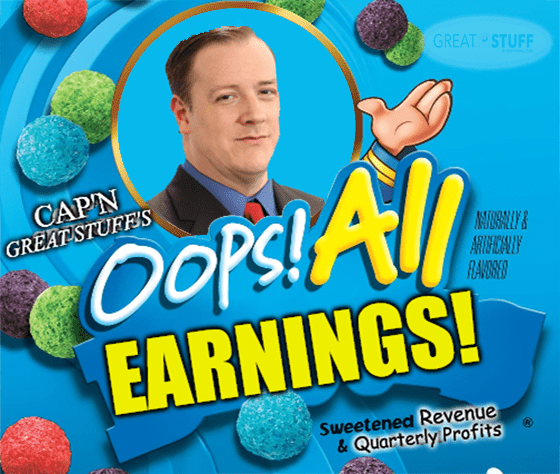 Friday Four Play: The “No Jobs Is Good Jobs?” Edition

OK, so it’s not all earnings today on Wall Street — despite what the meme above says.

In fact, April’s jobs data arrived this morning. And I hate to say: “I told you so,” Great Ones … but I told you so. This “Great Reopening” isn’t going to follow Wall Street’s bullish pie in the sky plan.

So, what happened last month? Well, the Labor Department said that the U.S. economy added just 266,000 jobs in April. That’s roughly one-quarter of the 1 million jobs economists expected. April’s job numbers missed the target as if they were Stormtroopers.

But wait … it gets worse. The unemployment rate unexpectedly rose to 6.1% from 6% in March. Wall Street was looking for a decline to 5.8%.

But what I did tell you, Great Ones, is that Wall Street was way too bullish on this whole reopening thing.

Daniel Zhao, senior economist at Glassdoor, hit the nail on the head:

The report is a bit of a head-scratcher that tempers recent projections of a smoothly accelerating economic recovery.

By all accounts, the improving public health situation should drive faster job gains, but the report is a humbling reminder that the road to recovery is not a straightforward one in a pandemic.

Even now, we’re getting rosy projections for the second half of 2021 from a flood of companies releasing their quarterly reports.

These companies may be right. But remember, we’re talking comparisons to last year. You know … when the economy was mostly locked down? Of course year-over-year comparisons look rosy — barely anything happened on the economic front last year.

But, Mr. Great Stuff! If the April jobs report was so bad and Wall Street’s outlook is misguided, why did stocks rally today?

I’m glad you asked, Great Ones!

Poor job growth is bad for the economy, but it is good for interest rates. Following the report, yields on both the 10-year and 30-year Treasury notes fell sharply. In fact, the 30-year note’s yield hit its lowest level since March 1.

Notice how you don’t hear Wall Street talking heads screaming about inflation anymore? Funny how that happens when investors realize that the economy isn’t quite as strong as everyone wants to believe it is.

And now for something completely different, here’s your Great Stuff Friday Four Play … after a quick word from our sponsor:

And Paul has discovered a way to play the crypto boom without the volatility of cryptos. It’s a little-known tech company that makes an obscure type of software that cryptocurrencies depend on to work.

This stock is at the forefront of a little-known tech niche. And Paul expects this tiny niche to grow more than 10 times over in just the next four years. He has the full details for you. Click here to learn more!

Wall Street has no idea what it’s dealing with when it comes to Roku (Nasdaq: ROKU). Want proof? Just look at this morning’s quarterly report.

Heading into Roku’s trip to the earnings confessional, analysts projected a loss of $0.14 per share on revenue of $492 million. But Roku wasn’t having any of that.

The company posted a surprise profit of $0.54 per share as revenue skyrocketed 79% to $574 million. What’s more, Roku added 2.4 million active accounts during the quarter, bringing its total to 53.6 million. The company even set revenue guidance between $610 million and $620 million, putting Wall Street’s expectations for $550 million to shame.

Best of all? Roku is still leveraging its install base with traditional TV advertisers. “Advertisers continued to follow audiences and move budgets into TV streaming, with Roku’s monetized video ad impressions more than doubling year-over-year,” the company told shareholders.

Ad revenue. That’s the real moneymaker for Roku heading forward. And Roku is just now starting to hit its stride on that front. In other words, there’s more growth to come for the company as consumers shift increasingly toward streaming … and away from cable TV. 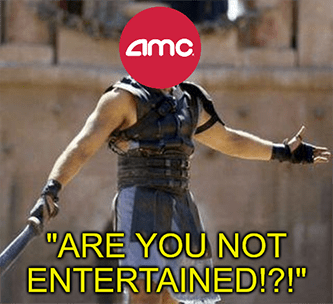 As tied to my Roku as I am, even I feel that streaming gets old after over a year with no alternatives. I, for one, am ready for the summer movie season — that sizzle of freshly pumped fake butter and the shkshkshkshk of sneakers on sticky cinema floors.

It isn’t just me, though. Theater chains, as it turns out, are much more amped up about the reopening’s progress than those job report worrywarts. Even with AMC Entertainment’s (NYSE: AMC) touch-and-go adventure with bankruptcy, the company eyes the broadscale reopening with bright, burning optimism.

CEO Adam Aron, consistent Churchill citer, believes that “this is not the end. It not even the beginning of the end. But it is perhaps the end of the beginning.”

Hey, if Aron needs to summon some inner wartime strength to get people to see the new Mortal Kombat, so be it. He carried on with the theatrics, declaring that the movie-going recovery is “just about to start. We can feel it, we can taste it, we can see it over the horizon.”

And to do so, Aron’s amassing his avid armies of stub-rippers and snack-sellers, as the company plans to hire between 5,000 and 10,000 new employees in the next few weeks.

Now, I like AMC, and unlike hordes of indie theaters and non-chains (sorry), AMC will crawl out of the pandemic wreckage like roaches beneath mushroom clouds — stronger, better and with much less competition.

Is Aron playing up Reddit’s overhyped fondness for the stock too? Probably. Why wouldn’t you? AMC’s meme stock status is the only real caveat to the theater chain’s recovery — we’ve yet to see if that will hurt or help its shares long term.

For today at least, AMC’s bulls and strong-together apes pushed the stock up 5% as Aron preps them to storm the beaches of the Great Reopening. 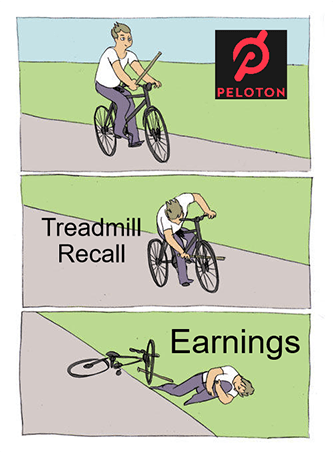 Pandemic life truly has been Peloton’s (Nasdaq: PTON) best of times and worst of times.

The stationary bike peddler finally started to address its supply chain bottleneck woes, and no surprise, sales shot up 141% for the fiscal third quarter. But its step forward into the treadmill tango might’ve been two steps back instead.

Recalling its potentially deadly treadmills was the right thing for Peloton to do — though not PTON the stock — lest the company lose more face by ignoring the deadly issue. We “oops,” we correct. But you can’t always predict the repercussions too easily.

Peloton’s projected $165 million impact is optimistic at best, and it accounts for all halted Tread sales in the meantime.

Peloton’s also “assuming” that only about 10% of Peloton treadmill owners will return their units, which I guarantee you will depend on whether or not you gotta ship out the treadmill yourself.

What?! No free shipping?!

Sometimes I hardly want to return a T-shirt somewhere … forget shipping out a treadmill. Those suckers are about to flood Craigslist.

I also have to ask: What’s the reputation fallout here? Is this recall a tiny oopsy or a Ford Pinto-sized problem? There’s a difference here between consumer confidence and investor confidence … but if enough consumers lose faith in Peloton’s safety, the company has a bigger revenue-sucking problem to worry about.

And that only adds to the lack of confidence I already have in Peloton’s future from an investing standpoint. The company was already losing money, and the recall only exacerbates that issue.

My other bone to pick is just how Peloton will deal with the threat of … well, real gyms. I’d be worried about competition from in-person fitness classes and non-garage-based workout spaces as more real gyms reopen and loosen occupancy.

But what do you think? Seriously, let me know in the inbox. I’m clearly out of touch with Peloton’s place in the “hot or not” hype spectrum, so maybe y’all are. 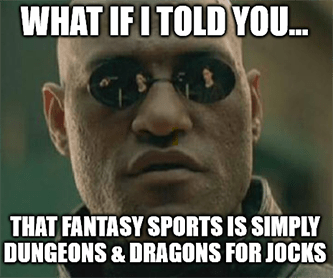 It figures that we’d leave off with another one of this week’s special: the double beat and raise!

Practically everyone had high hopes for DraftKings (Nasdaq: DKNG) heading into the earnings confessional, and DraftKings winked, said “pshaww!” and beat every estimate handily.

Wall Street forgave DraftKings’ losses amid its insane growth in the SPAC frenzy — partly because the platform’s monthly unique customer count came in high above expectations.

At the end of the quarter, DraftKings had 1.5 million customers, whereas analysts only expected 1.31 million.

Better still, DraftKings bumped up its revenue expectations for the full year, now expecting sales to grow between 63% and 79%. You already know why…

Sportsball is back! Go, team! Score those points! Do the thing!

I’m jersey’d up already, and every DKNG investor probably is too. The company’s bullishness over the sports snapback is what the street’s really celebrating today … initially, before the stock’s bottom fell out.

So, here’s where I’m at: DraftKings had an insane year when gamblers hardly had anything to bet on other than who’d keel over next on Zoom chat. In that time, the company also cranked out its hype campaigns all across social media and podcast-ville, to the point that DraftKings’ marketing expenses are up 325% year over year.

When sports do return — like, on the regular, not the wimpydimpy pandemic schedules we’ve seen — DraftKings’ sales and membership should take off like a shot, given its raised revenue guidance.

But, just like we’ve seen time and time again with companies not capitalizing on the massive earnings base they’ve built up — Spotify rings a bell — DraftKings has to eventually turn a profit to satisfy the Street’s increasingly high expectations.

But for now? This was the estimates-beating report that every DKNG bull, sports fan and Wall Street analyst had hoped for. And that optimism is more than enough to gloss over those pesky little losses in the name of growth.

Great Ones, You’re Up To Bat

Welcome to the weekend, you market mavens and brazen traders — you did it!

But don’t think the fun has to stop here. Why not drop us a line and take over the ranting mic for a change? I know you have some tale to weave or burning question to get off your chest, and there’s no better time than now. 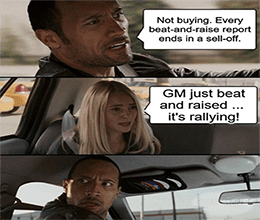 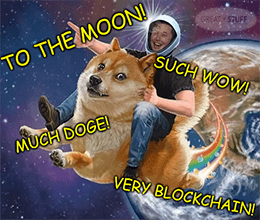