Last month, I had mentioned the huge expectations that investors had for the current earnings season.

When companies in the S&P 500 Index reported for the first quarter, it was expected that they’d announce annual growth in profits of over 17% on average. That’s a very high expectation coming off a year as strong as 2017, when those stocks’ bottom lines grew 16.21%.

In fact, the last time profits grew by that much was coming out of the recession in 2009 to 2010.

But looking at the chart below, you can see that companies reported even better-than-expected earnings in every sector except for real estate. 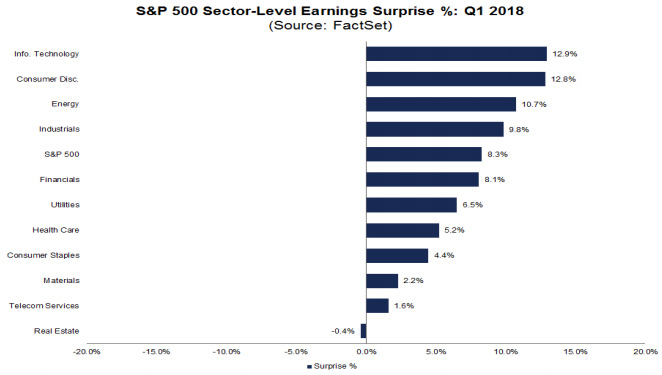 The highest earnings beats, on average, came from the tech sector, which were actually the same companies that had the highest expectations.

Right behind tech was consumer discretionary, which are stocks that do well during times when people go out and spend the most money on things like clothes, food, home improvement and travel.

These numbers suggest that the market should still be at an all-time high, since that’s where earnings are at this point. So why isn’t it? 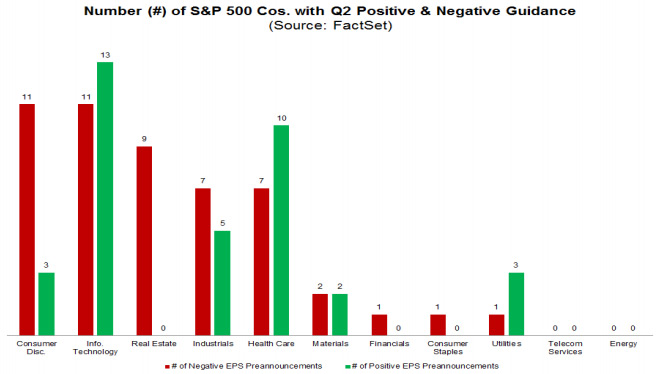 The stock market tends to “price in” earnings before they’re actually announced. For example, the market surged higher in November through January in anticipation of this earnings season.

When companies report earnings, the focus is normally on what the companies are going to do in the future. And as you can see above, the outlook for a lot of companies for next quarter isn’t very impressive.

It’s important to mention also that companies aren’t required to give guidance on future earnings, but a lot of widely followed ones do to give analysts numbers to work with.

Tech, typically the highest-growth sector, had very mixed results, and consumer discretionary was almost all negative.

However, since the first quarter’s growth was so high, this could just be companies being overly conservative, because the only thing worse than bad guidance is falling short of guidance.

For now, it seems that the market is still taking all of these earnings numbers into account. And since the earnings season began in April, the S&P 500 is actually up almost 4% in just a month and half.

So new all-time highs if companies can outpace their guidance going forward are definitely not out of the question.

Editor’s Note: During his webinar on Thursday, May 17, Wall Street legend Paul will be unveiling his most closely guarded personal strategy. It’s a strategy with a single goal: to help you turn a modest account into a $10 million fortune over the coming years. As you’ll see on May 17, this strategy will give you the chance to see gains as high as 1,000%, 10,000% and even 15,000% over time. To sign up to watch the webinar, click here now.

Commodity Volatility May Lead to Bull Market in Sector