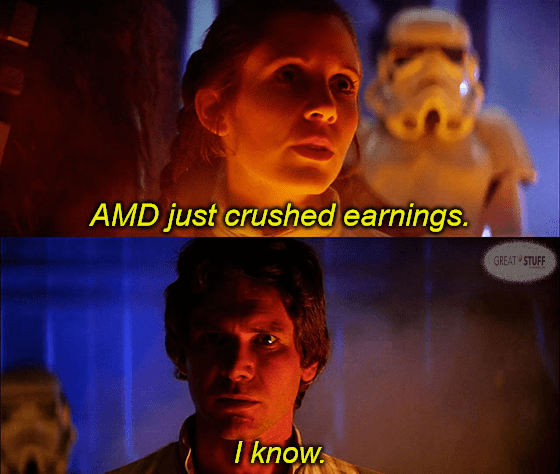 A long, long time ago in a galaxy far away … semiconductors were under an attack. And I thought analysts once again would talk tech investors into maybe cutting them a little slack.

But their response, it didn’t thrill us. “Demand is dried up!” they tried to tell us.

I wasn’t down with that gas. So I held my positions steadfast. Demand is just penned up, you see, with lockdowns still from President Xi. Soon enough, they’ll be set free.

That’s why we hold this stock…

What? What is this? Why does it sound familiar? Have we both lost our minds?

No, you’re not crazy. I took some creative liberties with lyrics from “The Saga Begins” by “Weird Al” Yankovic … which is a Star Wars parody set to Don McLean’s “American Pie.”

So you’re the crazy one. Got it.

You might think I’m crazy, but I’ve got the high ground!

And you thought growth was dead. AMD grew earnings 117% year over year! Revenue was up a staggering 71%!

AMD also lifted its full-year guidance to more than $26 billion, with Q2 sales expected to arrive at $6.5 billion — well above Wall Street’s target of $6.38 billion.

That’s a double beat and raise, for those keeping track at home. 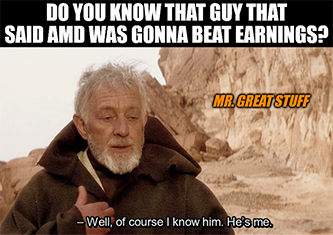 According to CEO Lisa Su, AMD’s success is coming from “premium, gaming and commercial portions of the (global semiconductor) market, where we see strong growth opportunities and expect to continue gaining overall client revenue share.”

Now, AMD did note that PC sales would come in below expectations for 2022 due to supply chain constraints and slowing consumer demand.

However, Su noted that slackening demand wouldn’t hurt AMD all that much because the company is still snapping up PC market share, especially when it comes to higher-end computers.

What’s more, AMD continues to see skyrocketing data center and cloud computing demand. In fact, about 48% of all new cloud and data center chip installs during March came from AMD, according to Jefferies Analyst Mark Lipacis.

Don’t let Wall Street’s Jedi mind tricks fool you, Great Ones. AMD remains one of the best tech investments on the market.

That’s why I’m leaving it as a “buy” in the Great Stuff Picks Portfolio.

May the fourth be with you!

B. Electric and autonomous vehicles.

C. 5G networks and the Internet of Things.

Watch this presentation to find out the answer!

Going: Nobody Wants A Pizza The Hutt 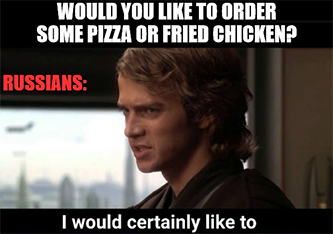 Oh, I wonder why…

Additionally, lockdowns in the Middle Kingdom continued to weigh heavily on Yum’s KFC franchise, which barely managed to eke out 3% sales growth this quarter.

Going forward, CFO Chris Turner said it’s unclear when demand in China will bounce back, as much of the country continues to be ravaged by new coronavirus variants. And as for Yum’s Russian market … well, that’s a deep-fried disaster absolutely no one wants to touch, let alone eat.

But how does this impact y’all YUM investors?

Well, unless you had a hankering for a slice of Siberian Pizza Hut pizza … you’ll probably be just fine. YUM stock barely budged following its earnings miss and continues to trade relatively flat on the day. 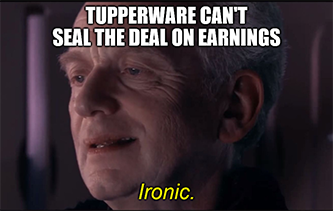 Net sales decreased 16% year over year to $348.1 million, which the company blamed on everything from COVID-19 lockdowns in China to rising sales costs as a result of the Russia/Ukraine war.

And while I’m sure both of these excuses have some merit … mesa thinks Tupperware’s overpriced plastic is more of the problem here, especially with so many low-cost competitors flooding the food storage market.

I mean, why spend beaucoup bucks for a name-brand Tupperware set when you can spend half the price on a knockoff that — let’s face it — probably comes from the same exact factory.

Or … you know … those plastic containers lunch meat comes in? It’s not like we’re deep freezing something in carbonite here.

To make matters worse, Tupperware told investors not to get their hopes up for a rebound the rest of the year — reneging its previous guidance of earnings between $2.60 and $3.20 per share.

Without an airtight alibi to explain Tupperware’s poor performance — and after signaling even more pain to come — investors started tossing their stock in the garbage bin, much like I’ve accidentally done with every Tupperware lid I’ve ever owned.

TUP stock is now down an abysmal 33%. 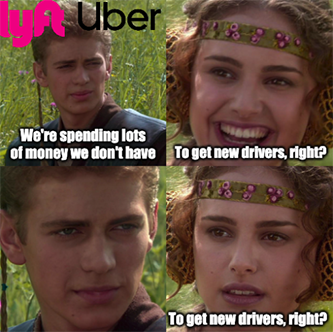 But if you’re looking for a clear loser amongst the two … well, look no further than Lyft.

The stock plummeted 25% in premarket trading this morning after company execs admitted they’re still having trouble luring new drivers onto Lyft’s platform — despite spending more money to incentivize them to do so.

Uber went on a similar spending spree to keep drivers on its platform, albeit with more luck than Lyft.

Even though it reported a $5.9 billion loss this quarter, Uber said it has more drivers on its platform today than at the start of the pandemic. It now also expects to generate “meaningful positive cash flows” for full-year 2022, a first for the company.

Despite Uber’s optimism, I’m still not convinced that either delivery driver will survive post-pandemic, especially since both are still posting losses despite raising ride prices to offset costs.

It seems like a game of who can lose the most money the slowest at this point … and pod racing, this is not.

There’s a group of stocks that Paul believes is completely changing the game for Main Street investors — giving them a chance at life-altering gains.

He calls them “Rebel Stocks” … because they’re breaking all of Wall Street’s most sacred rules. And that gives these unusual stocks the power to shoot higher and faster than most “normal” stocks.

To save your spot for free — and get exclusive access to all the pre-event bonus material — click here.

As always, if you’d like to sound off on the week’s hot topics, write to us for Friday Feedback! GreatStuffToday@BanyanHill.com is where you can reach us best. You can also keep up with the action here:

Until next time, May the fourth be with you! 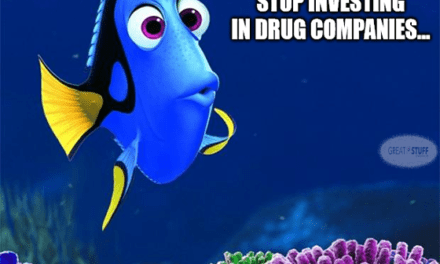 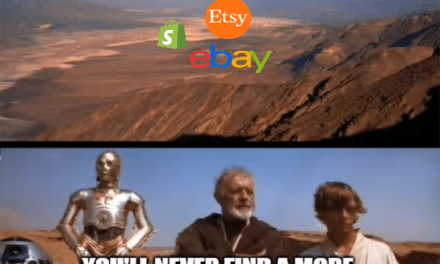