The nuclear arms race of the ‘80s helped lead to the collapse of the Soviet Union.

Now, the next technological race has begun – the AI arms race. And it’s signaling another historic shift…

A U.S. House subcommittee published an urgent report a few weeks ago. It highlights the critical importance of funding research in artificial intelligence (AI).

The report, Rise of the Machines: Artificial Intelligence and Its Growing Impact on U.S. Policy, warns of imminent economic and military dangers when — not if — the U.S. falls behind China and Russia in the AI arms race.

If you’re not worried yet…

The Dangers of AI

AI technology is about to get much more powerful … and dangerous.

According to the report: “AI’s computing power enables it to increase the severity of cyberattacks exponentially.”

For example, the power of AI technology could be used to trick self-driving cars across America into misinterpreting traffic signals. It could bypass facial recognition systems, such as the ones for ATMs. It could even fake voice commands. The possibilities are endless.

That means we need advanced AI defenses. Without them, we’re helpless against hackers from China, Russia and other nations.

Advanced hackers are already using AI-based cyberattacks. One such attack uses AI to observe and mimic normal user behavior, which helps it sneak past security tools. 62% of cybersecurity experts surveyed expect the attacks to get worse as soon as 2019.

And that’s a problem because we’re falling behind in this area.

For the moment, the U.S. still leads the world in AI research. But “China’s commitment to funding R&D [research and development] has been growing sharply.” 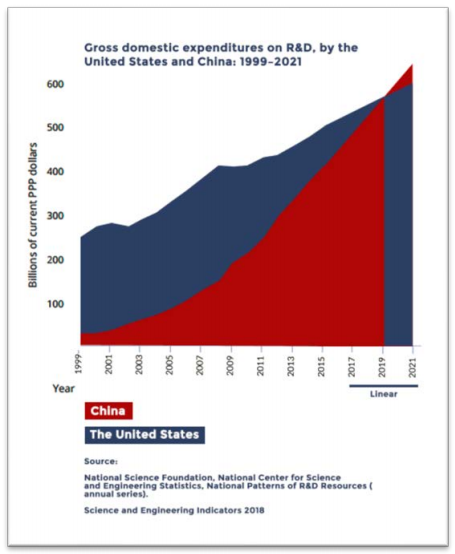 This is big. For the first time since AI technology went mainstream, the U.S. will fall behind.

This will affect not only our cybersecurity, but also our military endeavors. Think of weapons such as unmanned combat drones.

Russia plans to make 30% of its military equipment automated by 2025, so we want to be able to keep up. And China has pledged to be “the front-runner and global innovation center in AI” by 2030. Meanwhile, the U.S. has yet to come up with a timeline for its AI efforts.

But there’s a solution to this all: Besides research, the government simply needs to invest more in AI education and training.

Because this is clearly the wave of the future…

The AI Arms Race Is Upon Us

It’s easy to see why AI will become a massive industry in the years ahead.

The McKinsey Global Institute recently released a report on it. The firm projects that AI can help companies around the world create up to $5.8 trillion in value annually.

Travel, logistics and retail will benefit the most. And once the Trump administration recognizes the cybersecurity and military benefits of AI, the defense and technology sectors will get much more funding.

Investors should pay attention to this booming industry as the AI revolution and global arms race unfolds.

The World’s Most Valuable Brand is in Trouble