Home » Investing » The New 5G Kid on the Block

The hockey great Wayne Gretzky once said he wants to “skate where the puck is going, not to where it has been.”

It’s not a bad philosophy for investors either.

Do you want to chase what the crowd is chasing? Or how about focusing on an ignored group of stocks that’s selling cheap — with a catalyst to take them sharply higher?

If it’s the latter, I have just the ticket…

You can’t find many sectors out of favor as telecom stocks right now, both in the U.S. and elsewhere.

That’s not going to last for long because there’s an exciting new development hitting the market later this year — the development of new superfast 5G (for “fifth generation”) internet service.

Your smartphone operates on the current 4G standard.

In terms of speed, the difference between the two is like racing a Ferrari against a Model T Ford.

So how fast will 5G technology be?

With 5G, our download speeds will be more than 10 times faster — at least one full gigabit per second.

From a practical standpoint, 5G means almost no latency — the milliseconds of delay between the time we send a signal from our device to a network and back again.

It also offers the bandwidth for all the things we use the internet for today and tomorrow. Want to stream a crystal-clear 4K or 8K high-definition video? Piece of cake.

Remotely pilot a drone from hundreds of miles away? You can do that too.

It’s not just about streaming data on our mobile devices, but extending massive data links to autonomous vehicles and “sensorized” factories, as well as cities and homes bristling with all kinds of “smart” devices.

And it all starts happening in the second half of this year.

In coming months, you’ll start seeing headlines about the first 5G cities in the U.S. being brought online as the major telecoms switch on their systems.

According to current estimates, by 2020, close to 10% of Americans with a smartphone will subscribe to 5G services. 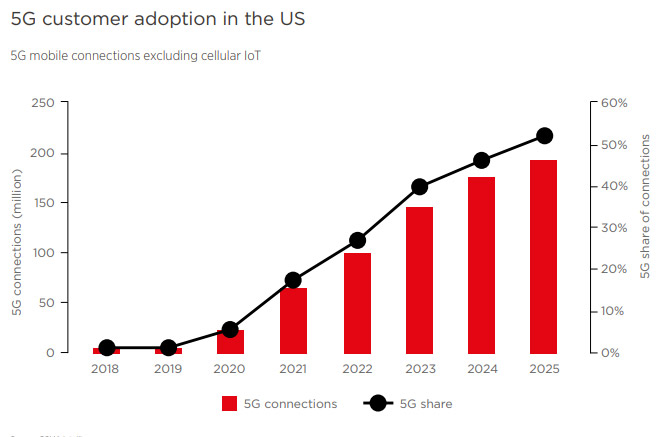 South Korean and Chinese users are on the same flight path. Europe is a little further behind the curve — most won’t see 5G services offered until 2023, according to current estimates.

How to Play It

I already have a stellar 5G telecom play in the Total Wealth Insider portfolio. But a broad way to play this trend is with the iShares Global Telecom ETC (NYSE: IXP).

This is a fortuitous time to buy the sector because it’s about as undervalued as it’s ever been as the majority of investors chase faster growth elsewhere. I expect the exchange-traded fund (ETF) to rise 25%, approaching its old all-time high, in the next two years. 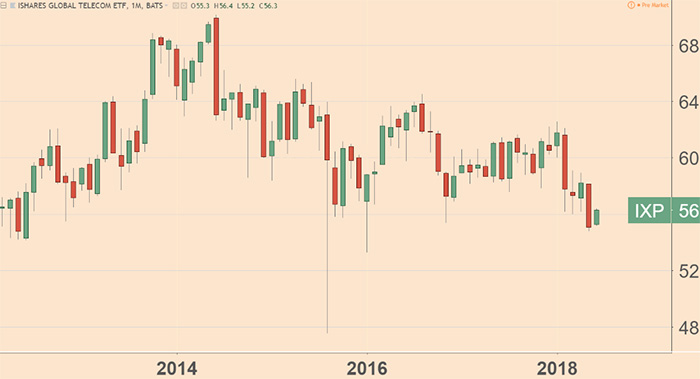 The ETF and its 30 or so U.S. and international telecom holdings reflect that sentiment.

So the fact that it’s trading at such a discount now — with the broader market indexes at or near all-time highs — shows just how unloved the sector is these days.

But if you anticipate the coming wave of 5G adoption, I think it’s a good bet a whack at this puck will put it in the goalie’s net in the next few years.

Invest in Google, Apple and AMD With This ETF!