Not too long ago, the idea of creating a functional piece of machinery or a household appliance out of, essentially, plastic or metal dust would have been considered absurd by most. However, the process now known as 3-D printing is experiencing exponential growth and is on track to become the standard process in manufacturing, aerospace and more in the near future.

The market for 3-D printers really started to explode around 2010-2011, when companies such as 3D Systems Corp. (NYSE: DDD) and Stratasys Ltd. (Nasdaq: SSYS) ascended as the industry leaders. By 2014, the list of items successfully 3-D printed ranged from pizza and chocolate to prosthetics, stem cells and bones. The items in the latter part of that list were just in the preliminary stages back then, but now a company called Organovo Holdings Inc. (Nasdaq: ONVO) is commercializing its liver tissue 3-D printer that can be used to predict reactions to new drug candidates. 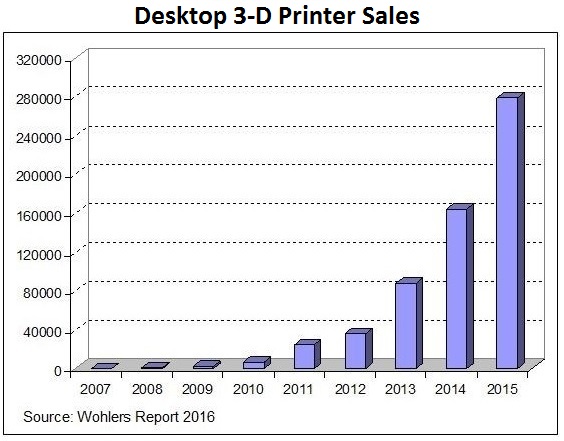 The above chart depicts the estimated sales in the 3-D printing industry, according to the Wohlers Report 2016. This chart shows the growth in desktop 3-D printers, which constitutes those that cost $5,000 or less (typically used by individuals rather than large companies).

The next chart shows the projected triple-digit growth that the industry has to look forward to over the next few years. 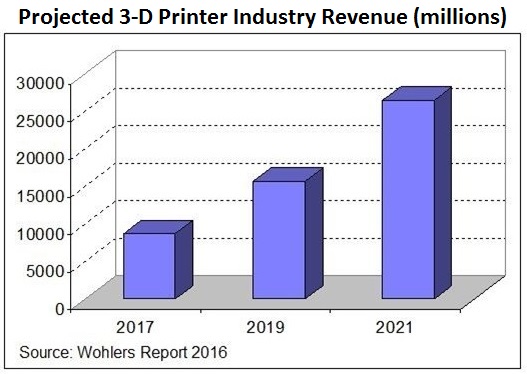 The possibilities for 3-D printing continue to expand at such a rapid pace that industrial giants such as General Electric Co. (NYSE: GE) and HP Inc. (NYSE: HPQ) have taken on the new market, increasing competition for the smaller companies … which should lead to even more growth and innovation. GE has already used this new technology to create machinery for aircraft engines, and they also plan on applying it to their health care, home appliance, and oil and gas infrastructure segments. HP recently introduced their new line of Multi Jet Fusion 3-D printers that are available for the public to buy; ironically enough, these printers have been used to produce a number of components to build their “regular” printers.

This Tech Trend Is Inescapable