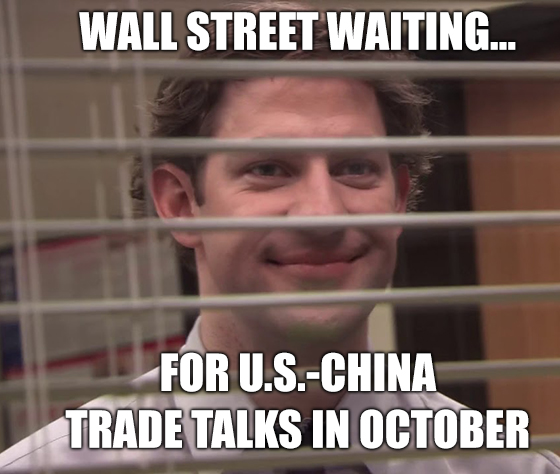 As the Trade War Turns

Big news: The hike in Chinese tariffs has been delayed!

There were also reports from Bloomberg that tariffs could be rolled back in some cases, due to an interim China trade deal. (This interim trade deal was later strenuously denied by the White House.)

Tariffs on $250 billion of Chinese goods were set to rise from 25% to 30% on October 1. That hike will now go into effect on October 15, which conveniently places the hike after a planned face-to-face meeting between Chinese and U.S. trade representatives.

According to Trump, he postponed the increase “at the request of the Vice Premier of China, Liu He, and due to the fact that the People’s Republic of China will be celebrating their 70th anniversary.”

The move arrived on the same day that China said that it would exempt 16 U.S. products from its own round of tariff hikes going into effect on September 15.

Finally, breaking late this morning, Bloomberg is reporting that an interim China trade deal is in the works. Details are very thin, but Bloomberg says that five sources indicate that such a deal is possible, which could bring about a rollback of existing tariffs.

How’s that for a happy Thursday?

We have a pair of olive branches ahead of key trade talks. It’s kinda cute, in a global-trade-war kind of way.

That said, I feel obligated to post the following trade war cycle update: 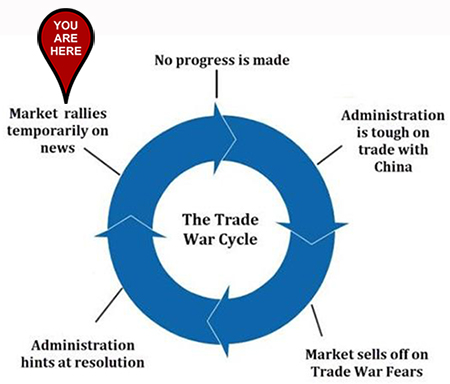 With trade talks scheduled for early October, we won’t have to wait long to see if we finally break out of this pattern, or if we’re in for more of the same.

The Good: A Shocking September

Ah, Tesla Inc. (Nasdaq: TSLA), the electric carmaker that could … or couldn’t, depending on who you ask.

So far this year, TSLA shares are down more than 20%. The company has been plagued by profitability and production concerns — which are valid — and accused of lacking demand … which couldn’t be further from the truth.

On Wednesday, Tesla stock rallied nearly 5%, its best single-day gain in seven weeks. Media reports attributed the rally to CEO Elon Musk’s tweet that Tesla’s luxury sedan is now the fastest four-door sedan “ever.” Ever? That’s a mightly long time, but I’m here to tell you that there’s something else…

Tesla managed to do what even the largest economy on the planet has failed to do: win concessions from China. At the beginning of September, Tesla gained a 10% tax break from the Chinese government. Now, Tesla wasn’t alone. Thirty-three other automakers also received tax breaks.

But, it’s no coincidence that TSLA shares are up 9.5% in September following this deal. Tesla doesn’t have a demand problem. It has a production problem.

It’s about to add a new gigafactory to help solve that problem. One capable of churning out 300,000 to 500,000 vehicles a year, located in the fastest-growing auto market in the world. Now that’s something to be bullish about.

The Bad: The Hangover

Last night, Aurora reported a 52% surge in fourth-quarter sales, but still managed to come up short of expectations. Earnings were also a concern, as Aurora didn’t release specific earnings per share data. The company did say that it recorded a net loss of less than a penny per share.

Other highlights included an 86% surge in cannabis production and a 94% spike in cannabis sold during the quarter. Additionally, Aurora saw a 12% rise in medical cannabis sales in the European Union (EU), indicating growing international sales potential.

The reason that ACB shares are plunging today is that investors were expecting Aurora to turn a profit this quarter. Profitability is clearly an issue for cannabis companies, but the problem could take time to fix.

Specifically, the biggest issue facing Aurora is a lack of distribution infrastructure and retail locations in both Canada and the EU. This is a problem that will eventually work itself out over time. After all, you can’t just legalize something and have stores and distribution channels instantly materialize out of thin air.

I recommended Aurora as a buy in Great Stuff for a reason. And if you can hang in there while these distribution problems work their way through the system, Aurora’s surging production capabilities will reward you.

The Ugly: A Leave of Absence

Oracle co-CEO Mark Hurd is taking a leave of absence for health reasons. Oracle didn’t say what those health reasons were, but it sounds at least somewhat serious. In the meantime, founder Larry Ellison and Safra Catz (the other CEO) will run things in his absence.

At the same time, Oracle reported flat, but in-line, first-quarter earnings and revenue. Second-quarter guidance, however, came in below Wall Street’s targets.

Oracle had been on a roll this year, rising more than 24% and executing its move into cloud computing with great aplomb. The company’s track record so far is likely helping mitigate today’s losses. But, the one-two punch of flat earnings and losing a CEO was just too much for ORCL bulls to ignore.

Great Stuff: Drone-ing on for Profit!

I don’t give Banyan Hill expert Jeff Yastine, editor of Total Wealth Insider, enough love in Great Stuff. We’re going to try and rectify that today with a look at Jeff’s latest article: “The Commercial Drone Market Is Positioned to Take Off — Invest!”

As you can tell, Jeff is hyped about the commercial drone market. We’re not just talking Amazon-delivery-drone hype, either.

For instance, according to the Federal Aviation Administration, drone registration has tripled since 2016. Currently, there are some 230,000 commercial drones operating in the U.S. What’s more, that number is expected to skyrocket in the next four years, rising roughly 1,000% to more than 800,000 unmanned aircraft by 2023.

That’s quite the investing opportunity. But how do you take advantage of it?

Finally, be sure to check back tomorrow, when I’ll have some exclusive tidbits from Banyan Hill’s Total Wealth Symposium.

If you’re here in sunny Amelia Island, Florida, stop by and say hi.