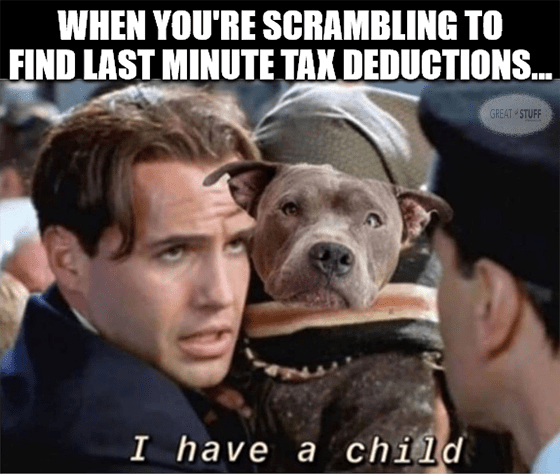 It’s that time of year again, Great Ones. It’s time to pay the piper. Time to give the devil his due.

That’s right, it’s tax time … that time of the year when you pay your America+ subscription fee. There’s no getting out of it … for long, anyway. As the saying goes, there are two things in life you cannot avoid: death and taxes.

That said, judging by Intuit’s (Nasdaq: INTU) second-quarter warning today, y’all are putting it off until the last minute this year.

In fact, the TurboTax and QuickBooks parent cut its second-quarter guidance this morning due to a “slow forming tax season.”

Looks like sloths filing taxes are in this year. Who knew?

I mean, I know it’s often complicated and painful, but think of Sasan Goodarzi, Intuit’s CEO! How’s he gonna keep all those starving INTU shareholders fed if you don’t do your taxes with TurboTax?

How can you have any pudding if you don’t eat your meat?

Y’all have been reading Great Stuff for too long if that’s your response. Kudos.

This guy talks to himself way too much. Is he okay?

I’m fine. My mother had me tested.

Anyway, Intuit now expects second-quarter revenue in a range of $2.66 billion to $2.67 billion. That’s down from prior revenue guidance of $2.72 billion to $2.75 billion.

That’s a drop of $60,000 to $80,000 in second-quarter revenue … all because y’all are too lazy to file your taxes early. Or something like that … at least according to Intuit.

But Intuit knows you’ll have to file sooner or later. Mwahaha! That’s why the company kept its full-year revenue outlook at between $12.17 billion and $12.30 billion.

“We continue to see strong momentum across the company with Small Business and Credit Karma expected to deliver record high revenues for the quarter with tax on track to deliver full year fiscal 2022 revenue guidance,” said CEO Sasan Goodarzi. I keep tellin’ ya. You can’t escape taxes, man. Game over.

That said, even if Intuit hits the top end of its 2022 revenue range, the company will still come up shy of Wall Street analysts’ estimate for $12.34 billion. But what do analysts know? Right, Great One Al P.?

If you’re an INTU investor, you’re probably feeling the pinch about now. The stock is down about 26% from its December highs. Given that Intuit is right and that delayed revenue from all you tax-filing slackers is eventually going to roll in, this decline just might be a buying opportunity.

This is doubly so, given that INTU stock is trading well below Wall Street’s consensus price target of $711.29.

In other words, if you’re looking for a solid, boring value play that isn’t going to get the pants rocked off it amid this year’s slew of Federal Reserve interest rate hikes, then INTU looks likely to fit the bill.

Speaking of bills … are y’all really putting off filing your taxes like Intuit says? Or did you just find a better way to file? One that shows you the secrets to keeping more of your hard-earned cash out of Uncle Sam’s greedy little fingers?

There are countless sneaky — but 100% legal — ways to slash your taxes. You just need to know where to look.

Asset protection expert Ted Bauman outlines all the ones you should know inside a comprehensive 55-page report called Slash Your Taxes.

Wait until you see the trick on page 33, known as the “sandwich rule.” This strategy could be used to deduct a five-day vacation to Hawaii!

These tax tips are anything BUT ordinary … and they could help you keep more of your hard-earned money. Click here now for the urgent details.

Oh, the very same. Remember all those times we blasted Intel for not taking its chipmaking production seriously? You know, that chipmaking business that Intel prides itself on?

The chipmaker fled across the desert, and Intel followed.

No more will Intel’s lack of production prowess be the butt of our jokes — no sir! Granted, we can still make fun of the company’s willingness to move goal posts … but as far as its Tower buyout is concerned? Mission accomplished.

Monster Beverage (Nasdaq: MNST) may not be shooting for the moon, but it’s hoping to land among the stars by merging with fellow brewmaster Constellation Brands (NYSE: STZ), the maker of Modelo, Corona and Svedka … among other things.

Those “other things” include cannabis-infused drinkables, which is what I’m most looking forward to if the merger goes through.

Now, I’m not saying a cannabis-Monster concoction is indubitably on the table … but I am saying that Mango Loco Monsters are one of the best cures for cotton mouth. And if you’re gonna make both brews anyway, why not combine the two into one convenient canister?

What are your thoughts on the spiked energy drink market, Great Ones? Got any raving recipes you wanna send my way? Let me know: GreatStuffToday@BanyanHill.com.

Commoners In The Cosmos Have you heard the news, Great Ones? For the low, low price of $150,000, we humble plebians can now reserve the right to board one of Richard Branson’s rockets.

After holding roughly 600 reservations for the who’s who of interstellar “space” travel for much of the last decade, I guess Virgin Galactic (NYSE: SPCE) figured it was time to open its doors to the general public.

Or, more likely, the company needed a fresh cash infusion.

Um, what “plebs” have $450,000 lying around for space tourism? Follow-up question: What have I been doing wrong my entire life?

Remember a few weeks ago — ha, no — when the two titans of toymaking were duking it out over the rights to make miniatures based on The Walt Disney Company’s (NYSE: DIS) princesses … and Hasbro (Nasdaq: HAS) lost those rights to Mattel (Nasdaq: MAT)?

Well, Hasbro hasn’t gotten over it. You wanna know how I know?

Mattel’s been foretelling the toy industry will grow “to infinity and beyond” over the next few years despite pandemic-induced price increases … while Hasbro’s been hammering on about the travel and leisure markets (and inflation) hampering sales.

The Cat’s Outta The Bag Animal drugmaker Zoetis (NYSE: ZTS) was all bark and no bite this morning after releasing earnings guidance for 2022 that missed Wall Street’s expectations.

Zoetis said it expects adjusted earnings of $5.09 to $5.19 per share, while analysts anticipated a slightly higher return of $5.21 per share.

Usually, even a minuscule miss like this is enough to send Wall Street wailing. But Zoetis investors seem content with concentrating on the company’s strong fourth-quarter sales, which topped $1.97 billion and beat estimates for $1.93 billion.

Still, with ZTS stock down more than 15% this year, it almost makes you wonder whether Zoetis hired Sarah McLachlan to play a few songs during today’s earnings presentation.

I mean, you try reading an earnings breakdown while “Angel” plays in the background … and then tell me if you wouldn’t buy a few ZTS shares to feel better about yourself.

Comspoc Corp. has estimated that the 42,000 satellites that SpaceX has said it would like to deploy could be involved in 52 collisions and 1.8 million maneuvers over 10 years based on the current number of tracked objects. — The Wall Street Journal

An increase of this magnitude into these confined altitude bands inherently brings additional risk of debris generating collision events. — NASA

Oh now y’all are worried about space junk? Thanks for joining the conversation…

And thank you, Great Ones, for joining us for another dose of quotable Greatness — or whatever you’d personally call the soundbites above.

Once more, we are in the crossfire of satellite slingers like SpaceX/Starlink, space agencies like NASA … and the Federal Communications Commission (FCC). Can’t forget the FCC.

You might remember from our past deep dives on the space debris debate that SpaceX plans to send up a bajillion satellites as part of its Starlink internet service.

And as of last month, SpaceX was petitioning the FCC to authorize its next salvo of 30,000 satellites to help build out the 42,000-satellite-strong constellation.

But the FCC won’t let SpaceX be — not when NASA’s concerned about space debris. NASA sent the FCC a letter containing today’s quote, warning that SpaceX’s plans of satellite domination bring with it an increased need for traffic coordination.

NASA doesn’t want to kill SpaceX’s satellite-launching vibe — the agency still depends on SpaceX to fly astronauts to the International Space Station, after all. But NASA does want the FCC to consider the impact that corporate constellations (not the fun kind) will have on the number of tracked objects in orbit.

Now, here’s a crazy thought, but what if we … hear me out … track those objects better?

Maybe —just maybe — we could figure out actual traffic-mitigation rules ahead of time instead of talking about how many millions of evasive maneuvers and near-misses there might be.

Or would prepping for a satellite-heavy future be too sensible?

Believe it or not … the FCC is actually leaping into action, albeit with the reaction speed of Cthulhu awakening from its slumber deep within R’lyeh.

Back in 2020, the FCC started updating its debris-mitigation rules for the first time in 15 years. FCC Chairwoman Jessica Rosenworcel openly stated that the agency needed to do more to address collision and debris risks — and it is! Kinda…

The problem is … wait, hold up. Release of persistent liquids? Do I even want to know?

Even with all those fancy-shmancy disclosure guidelines … you’re still contending with the likes of Elon Musk. This is the guy who also said: “Space is just extremely enormous, and satellites are very tiny.”

About the size of Mickey Rooney, right, Elon? And you want to be my satellite internet salesman…

So, the FCC is (supposedly) paying more attention to what satellite companies disclose about their debris mitigation. But remember, there’s still no one regulator that handles orbital congestion worldwide … yet.

We’re getting deep into the nitty-gritty of spacefaring accountability here, which is why I want to turn this over to you now. Regardless of what they actually disclose … do you feel that space companies can be trusted to handle their debris responsibly?

Let me know what you think here in the inbox.

For all you space stock investors out there — there are dozens of us, I swear — looking for another way in on the space sector, look no further.

Everything is setting up perfectly for space stocks to go on a historic run. And Paul is all over it:

Space is NOT a get-rich-quick scheme. But if you want to make BIG money, space is your jam.

Paul just released a new video briefing outlining his expectations for the entire sector. Not only that … he wrote two detailed reports with names, tickers and predictions for all his favorite space companies.

It’s all covered in his latest video. Watch it here now.

Your email might even be featured in this week’s edition of Reader Feedback! We’d love to hear from you. In the meantime, here’s where else you can find Greatness: