It’s over. It’s finally over.

Game of Thrones, the most-watched (and most-pirated) TV show of all time, came to an end this past Sunday night. The show won awards, made stars out of directors and actors alike … and made it okay to sit on the couch with your significant other for an hour or so and not say a word.

So, what now? Sunday Night Football doesn’t start for another few months.

What are we supposed to do now that Game of Thrones is over?

Talk to each other?

Luckily, I still have my smartphone to fall back on.

HBO and parent company AT&T Inc. (NYSE: T) don’t have those luxuries, however. (OK, maybe they could just play Friends reruns … I hear the show is leaving Netflix this year. It’s an opportunity, HBO!)

The world of online streaming isn’t that far removed from the power struggle in Game of Thrones. Most U.S. viewers have three streaming subscriptions: Netflix (Nasdaq: NFLX) for $8.99 per month, Amazon Prime Video (Nasdaq: AMZN) for about $10 per month and Disney’s Hulu (NYSE: DIS) at $5.99 per month.

HBO does have some really good series out there, like Westworld, Big Little Lies and the miniseries Chernobyl. But none of these shows have the same impact or the same cultural relevance as Game of Thrones. As a result, HBO’s lofty $14.99 per month subscription fee is low-hanging fruit for anyone looking to trim a little on their monthly budget.

And if the following chart is any indication, HBO could be headed toward a subscriber “Red Wedding.” 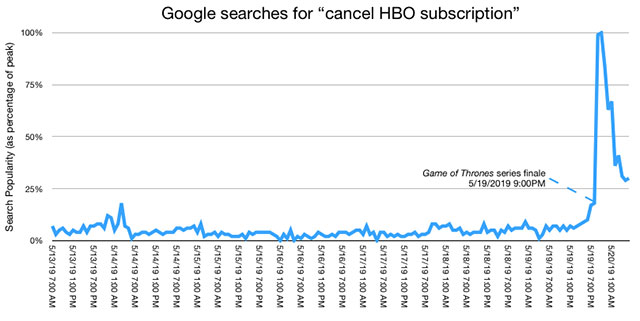 Can Tesla Investors Handle the Truth?

The Lord of the Bling