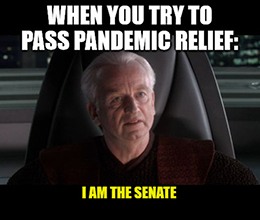 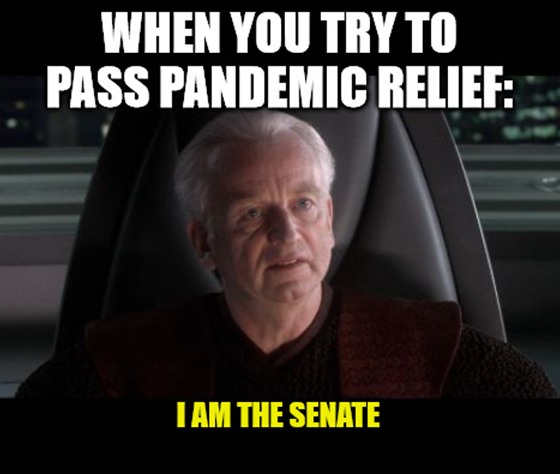 Aiding and a Betting

Welcome back to another thrilling edition of Great Stuff!

Before we get started today, I want to remind you that today is your last day to chime in for this week’s edition of Reader Feedback, which arrives hot off the presses tomorrow.

If you haven’t written in before, don’t worry, we don’t bite. That costs extra! So, drop us a line at GreatStuffToday@BanyanHill.com and hit us up with whatever’s on your mind. The Great Ones know what I’m getting at…

Now, back to life. Back to reality. Back to this crazy market.

We’re talking aid and stimulus packages today. There’s been a trend on Wall Street that I’m sure many of you have noticed:

Remember the old Great Stuff Trade War Cycle chart? Yeah, it’s something like that. I found the following chart posted by Redditor Point21 on the infamous r/WallStreetBets: 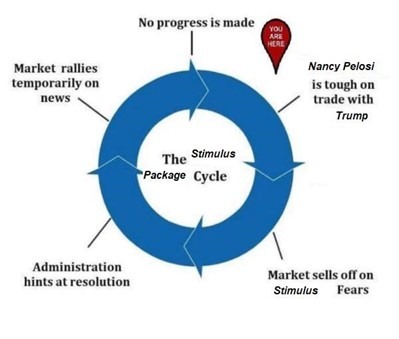 Clearly, this is very tongue-in-cheek. But, it does an uncanny job of illustrating Wall Street’s behavior during the past couple of months.

As you can see, we’re headed into the “Nancy Pelosi is tough on Trump” phase.

In short, House Speaker Pelosi is working with Treasury Secretary Steven Mnuchin on a comprehensive pandemic aid package at the behest of President Trump. Trump wants a deal done before the election, and so does Pelosi. Those two agreeing on anything is quite shocking.

What’s more shocking is that both the House and the White House previously agreed to a $1.8 trillion aid deal. But that deal never passed the House after the Senate said it wouldn’t vote on the bill.

The Senate, it seems, wants a much smaller aid package. Because of this, Senate Majority Leader Mitch McConnell has warned the White House to not rush an agreement with the House ahead of the election.

So, how does this affect us as investors? Well, the market continues to rally on any shred of hope for an aid package … only to crash on the rocks in the Senate. That, dear reader, is volatility. And it continues to plague market bulls and bears alike.

The CBOE Market Volatility Index (VIX) is once again trading near its September highs. If the trippy triumvirate (White House, Senate and House) doesn’t get its act together soon, we’re looking at more of the same for the foreseeable future.

And if you’re as tired of the stimulus thumb-twiddling as we are, don’t wait to take volatility relief into your own hands. Click here to see how! 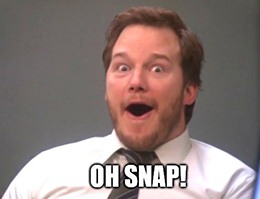 Like the crack of the whip, Snap Inc. (NYSE: SNAP) attacks. Front to back, in this thing called social media.

Revenue rose a whopping 52% from year-ago levels, while active users jumped 18%. And that’s just the current quarter. Looking ahead, Snap expects fourth-quarter revenue to grow between 47% and 50% with 257 million daily active users.

That’s a “beat and a raise” for those keeping track at home. But it gets even better. Snap also told investors that ad spending began to ramp up once again. That’s extremely good news after this summer’s ad-spending drought.

SNAP shares spiked more than 27% on the news, hitting a fresh all-time high.

It may be tempting to dive into SNAP right now, but we don’t chase rallies … we ride them. Wait for these gains to consolidate if you’re looking to invest in SNAP. You’ll thank me later. 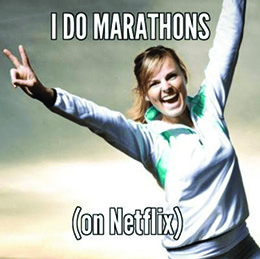 It looks like Netflix Inc. (Nasdaq: NFLX) has hit peak market saturation in the U.S.

Earnings rose 18% to $1.74 per share, as revenue climbed 22% to $6.44 billion. But neither figure was good enough to beat Wall Street’s expectations. Then again, it’s never really been about earnings for Netflix.

Subscriber growth has always been the real driver for NFLX. And that growth fell off a COVID-19 cliff last quarter.

After it raked in 10 million subs in each of the previous two quarters, Netflix said it added only 2.2 million subs in the latest three months — below the consensus estimate and Netflix’s own guidance for 2.5 million.

And the hits kept on coming…

Reaching saturation? I think we might’ve hit that point in the U.S. a couple of months ago.

According to Statista, an impressive 74% of U.S. households have a video streaming service. But add that to rising competition from Disney, AT&T, Amazon and hundreds of other new streaming services … and it’s not hard to believe.

What this means is that future growth for Netflix will rely on non-U.S. subscribers. And that growth could be hard to come by during the pandemic.

The Ugly (What?): Love, Tariffs and Robots 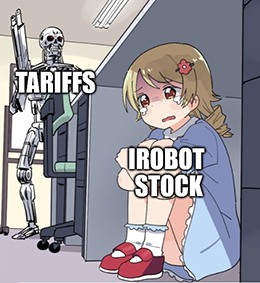 This is the saga of iRobot Corp. (Nasdaq: IRBT).

Online orders direct from iRobot jumped 70% and accounted for 60% of total sales. iRobot even guided full-year earnings and revenue above the consensus estimates.

Eat your heart out, Isaac Asimov.

And yet, IRBT shares plummeted more than 17% today. Have investors lost their minds? There are two factors at play here:

First, IRBT is up more than 34% from its September lows. The stock rallied sharply just ahead of earnings, signaling that a sell-on-the-news event was likely. We’re seeing that today.

Second, iRobot currently benefits from a tariff exclusion for robotic vacuums through the end of the year. Analysts don’t believe that the company will get a similar exemption in 2021, when a 25% tariff will be applied to iRobot products.

The first is to be expected. In fact, when IRBT sold off following a stellar second-quarter report, Great Stuff recommended buying the stock.

The second is extremely overplayed — especially if President Trump doesn’t win a second term. In the event that we see a President Biden, all bets on these tariffs are off. Furthermore, if Trump wins a second term, I see iRobot getting another tariff exemption as an American company.

Today’s plunge in IRBT shares is another buying opportunity for a well-run American company. If you didn’t get in on IRBT the first time Great Stuff recommended it, now is your chance!

All right, Great Ones, I’ve waited … you’ve waited … we’ve all waited for the time to turn this market meme hootenanny over to you. No, it’s not Reader Feedback day just yet — that’s tomorrow, remember, so you still have time to share your thoughts on these crazy climes with us.

In the meantime, let’s dive into what you all thought about our last Poll of the Week. We asked: How do banks make you feel?

First off, I’m impressed banks make you feel something other than boredom … even if about 18.8% of you don’t ever want to hear about banks again after that whole financial crisis kerfuffle.

Now, on the other side of the positivity coin, I’d love to hear more from the 10.9% of you who voted that “every portfolio needs banks!” What’s the rest of your portfolio like? Are you a financials fanatic or just like to keep the banking balance? Let us know here.

Either way, because we here hate nice, round numbers, another 32.8% of you would take biotech’s jargon-juiced-up jive than stodgy banks any day. The rub, of course, is that this particular blend of mumbo jumbo is deeply telling of the U.S. economy as a whole.

So … don’t mind if I touch on it one last time for good measure.

Right now, we have both the big banks and the small business guys (or gals) wishing at the wavering pillars of stimulus.

While bank traders amped up their revenue raking last quarter, banks still want their borrowers to have the liquidity to stay afloat — nowhere near as much as those same owners, renters, lessees et al. want to stay afloat themselves, but still.

The risky cracks in the banking game are showing through: As long as the stimulus back and forth plays on, rent and lease defaults get closer. And banks know there’s a tsunami of defaulting just over the 2021 hill. How far can we kick the can?

Here we have the pros and cons that might or might not have kept 37.5% of you out of banking stocks. Did I miss anything? Let us know right here why you haven’t taken the plunge.

Now for this week’s poll. With those looming risks in mind, let’s turn to the Great Stuff inbox’s eternal spring of joy … the election. We’ve talked of the volatility leading up to this looming November specter, but where do you think the market is headed after the election?

Remember, the big banks have billions set aside to protect themselves from any potential market nastiness, along with whole floors of antsy traders looking to trade up a storm any which way we go.

Don’t be caught off guard yourself. If you don’t have a volatility strategy in your front pocket ready and rearing to go, it’s beyond time you got with the prepping program. Click here.

Everything’s better when you share your thoughts with the Great Stuff gang. Whether you answered our poll above, wrote in to our inbox, or checked out our favorite volatility-beating strategies … thank you!

We deeply appreciate you keeping in touch. We’ll dig into your questions, rants and dialogues tomorrow. But until then, you can also follow along with social media in the meantime: Facebook, Instagram and Twitter. 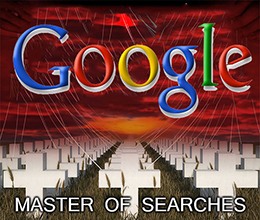 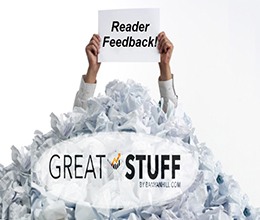