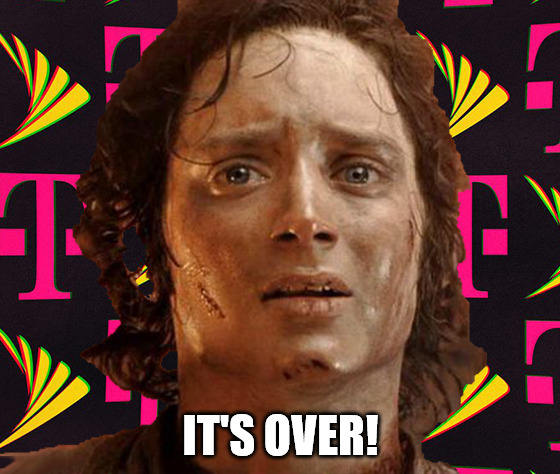 The Un-Network Is Now THE Network

And then there were three…

The wireless market got a touch smaller and far more interesting this morning. A U.S. federal judge ruled in favor of the $26 billion merger between Sprint Corp. (NYSE: S) and T-Mobile US Inc. (Nasdaq: TMUS).

The ruling shut down a multistate challenge to the deal’s approval by both the Federal Communications Commission and the Department of Justice. According to Judge Victor Marrero: “The resulting stalemate leaves the Court lacking sufficiently impartial and objective ground on which to rely in basing a sound forecast of the likely competitive effects of a merger.”

Marrero continued that the states failed to convince the court that a combined company would “pursue anticompetitive behavior.” Furthermore, the judge noted that, if left alone, Sprint could “cease to be a truly national [mobile network operator].”

New York Attorney General Letitia James is considering appealing the ruling. “From the start, this merger has been about massive corporate profits over all else, and despite the companies’ false claims, this deal will endanger wireless subscribers where it hurts most: their wallets,” James said.

Let’s start off with a great big “Well, duh!” for Attorney General James. Of course this deal is about massive corporate profits. All deals are.

Corporations exist to generate massive profits. That’s their job. That’s what they do. (They’re like the Conway Twitty of the business world — yes, that’s a country song reference, y’all.)

I won’t comment on the antitrust implications of the Sprint/T-Mobile deal … or whether it’s ultimately bad for customers or not. I’ll leave that to Banyan Hill expert Ted Bauman, who’s sure to comment on this merger sooner or later.

By the way: Feel free to let me know your thoughts on the Sprint/T-Mobile merger by dropping me a line at GreatStuffToday@banyanhill.com.

What I will say is that this deal is big trouble for moose and squirrel … er, rather, Verizon Communications Inc. (NYSE: VZ) and AT&T Inc. (NYSE: T). The pair have dominated the wireless world for years, gobbling up subscribers left and right.

Now, however, there’s a serious contender to deal with.

After AT&T failed to take over T-Mobile back in 2011, the latter used the $3 billion in breakup fees to launch a serious bid to dominate the wireless market. However, T-Mobile lacked in spectrum — i.e., the wireless airwaves that connect your devices.

Sprint has oodles and oodles of spectrum, including a broad swath of 2.5 GHz mid-band spectrum that’s critical for 5G wireless. Unfortunately for Sprint, it has no cash to take advantage of this spectrum.

That’s what the Sprint/T-Mobile merger is all about, Charlie Brown: spectrum. And now, T-Mobile has both key 5G spectrum and the cash to further its nationwide 5G rollout plans.

So, while AT&T struggles to pay down the cost of buying content and Verizon rides the fence on what to do with its media division, the new T-Mobile will solely focus on rolling out 5G to the world.

That focus is truly great stuff for investors. I look forward to seeing how the combined company’s stock trades once the merger is complete. It’s certainly on Great Stuff’s future watch list.

In the meantime, there’s work to do to bring 5G to the masses.

I mean, you can have all the G’s you want, but without a ground network to transfer that signal from the tower to the internet at high speed … well, you’re SOL.

That means fiber optics, and rolling out such a network doesn’t happen overnight — unless you’re out there unspooling cable … you aren’t, are you?

So, let’s stay crafty and find some real 5G profits.

And boy, are there profits to be had! The great wireless migration could generate over $12 trillion in new industry wealth … from telecoms to consumer 5G devices and more.

Many Great Stuff readers know Ian King and his incredible eye for picking tipping-point tech trends. The 5G explosion is no different. Ian just spotted one company that’s at the forefront of the 5G transition.

If you click here now, he will show you just how huge the 5G trend is … and why this tiny stock is setting up to clutch that $12 trillion windfall.

The Good: Hasbro Ain’t Toyin’ Around 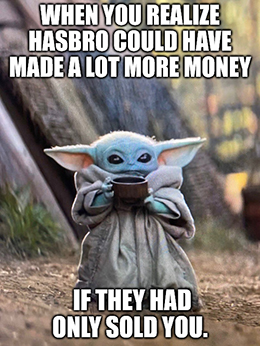 After nearly a year of dominance by plastic figurines and bobble heads bobbleheads, actual toys are back!

Hasbro Inc. (Nasdaq: HAS) reported that net income skyrocketed to $2.01 per share in the fourth quarter from just $0.07 per share last year. Adjusted earnings came in at $1.24 per share, blowing past the consensus estimate for $0.91 per share.

Umm … Mr. Goldner? Maybe you could get some freakin’ Baby Yoda merch on the shelves soon, please? Honestly, your revenue could’ve been millions higher already! 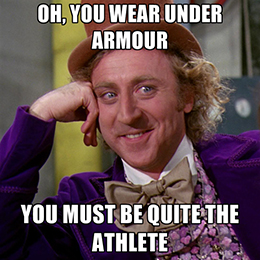 What do you get when you cross a Chinese pandemic with a struggling “premium” athletic clothing retailer?

You get a hot mess, that’s what you get. Under Armour Inc. (NYSE: UA) not only missed Wall Street’s fourth-quarter revenue target, it also lowered sales guidance for 2020. The company expects revenue to fall between $50 million and $60 million for the first quarter … and that’s just from lowered sales expectations.

Sure, Under Armour has about 600 stores in China, but about 60% of the company’s products are manufactured in China, Jordan, Vietnam and Malaysia. With the exception of Jordan, the rest of those countries are smack in the middle of coronavirus central. That means lowered productivity and potential supply disruptions as this epidemic grows.

And as for that “premium brand” thing: “We believe prior promotional activity has impacted the consumers’ willingness to pay full price for our brand to a higher degree than we originally anticipated,” said CEO Patrik Frisk.

So, part of Frisk’s excuse is that customers don’t want to pay full price for the company’s stuff? I think the market is telling you something, man.

For now, I’ll avoid Under Armour stock like I avoid paying full price for its clothes.

The Ugly: Dish Is a Mess 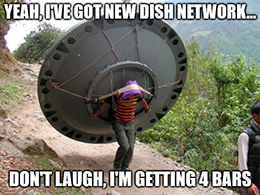 Did you think I forgot about Dish Network Corp. (Nasdaq: DISH)?

No, sir. Dish is crucial to the whole Sprint/T-Mobile merger. As part of the deal with the Department of Justice, Dish will buy Sprint’s prepaid wireless business — aka Boost Mobile.

Let’s make no bones about this: Dish is getting screwed. The company already struggles with falling subscriber numbers for its pay-TV business. Dish’s old-school satellite service is worse than cable, after all. It’s all the content you’ll never watch (but still pay high prices for) … all bundled up in a service that screws up in the rain.

The bright idea to fix this is for Dish to buy Boost Mobile — a 4G mobile service on Sprint’s old network in a 5G world. Why not just start rolling out Betamax tapes as well, Dish?

Not only does Dish get the short end of the stick on the wireless deal, it’ll also soon face serious competition from Starlink — Elon Musk’s new satellite-based internet service.

I know, you’re thinking: “Starlink isn’t a pay-TV service, why should Dish worry?”

The answer’s simple: video streaming. The only thing that prevents some customers from moving away from Dish is the fact that they can’t get shows any other way. With Starlink and a Roku Inc. (Nasdaq: ROKU) player, all that changes.

I have to think that the only way Dish survives in the new Starlink and 5G world is for someone to buy out the company. Although, what company has such poor judgement that it’d even consider buying Dish? (No AT&T, don’t even think about it!)

I mean, sure, 5G has never had its picture on bubblegum cards … so you’ve got me there.

That said, today’s Chart of the Week details some of the key benefits that the average smartphone user will notice right away when switching to 5G: 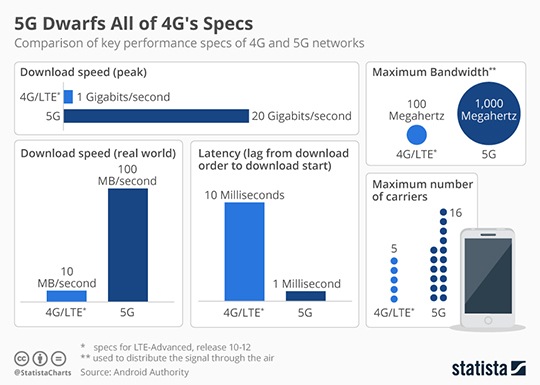 Now, if that doesn’t mean a whole lot to you … let’s just say that 5G is stupidly faster than your current 4G wireless service. That real-world speed of 100 megabytes/second is faster than most people have from their landline-based internet provider.

In other words, if you aren’t a data hog like yours truly, you might even be able to ditch your internet landline, just like you ditched your phone landline years ago. (Please tell me you don’t still have a phone landline…)

When it comes to 5G, this is just the tip of the iceberg. We’re in a Big Data world now, and Big Data needs high-speed transfer rates. As you can see from the chart, 5G has all that covered and more. 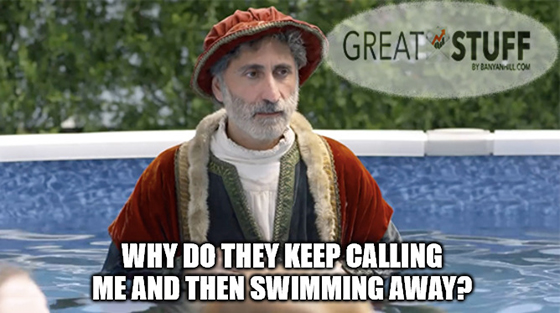 This week, we’re focusing on the Sprint/T-Mobile merger — surprise! Be sure to write in to GreatStuffToday@banyanhill.com and let us know your thoughts!

In the meantime, don’t forget to check out Great Stuff on social media. If you can’t get enough meme-y trade war goodness, follow Great Stuff on Facebook and Twitter. 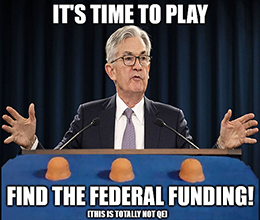