I share many tastes with my father, our own Bob Bauman: love of history, the Titanic story, bad puns. So, when I let slip the other day that I’d lost my copies of the best works of the great American humorist James Thurber, I soon got an email from Amazon saying they were on the way. 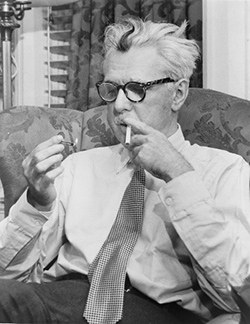 Thurber was more than a humorist. He was a gifted linguist and literary critic. And his drawings — “not fifth-rate, just third-rate,” according to Harold Ross, his inimitable editor at the New Yorker — are iconic.

He was also a great quote-machine. One of my favorites is the Buddhist-tinged “Let us not look back in anger, nor forward in fear, but around in awareness.”

What if present-time awareness includes indicators of a fearful future? So be it. But don’t stress … just plan.

What do the tea leaves say about the likely future of the stock market?

There are three scenarios, and none of them call for standing pat…

Fast or Slow? And How Far?

Maybe the bull market will continue. Or maybe not. Flip a coin … your chances of calling it right are 50-50.

If the market does tank, what are the likely scenarios? Here are the three most likely, in ascending order of likelihood.

Big Crash, Then a Bounce

If there’s nothing fundamentally wrong with the market and the U.S. economy, we might see a sudden drop triggered by rules-based selling — as in October 1987’s “Black Monday” — followed by a partial recovery.

Black Monday was the largest one-day percentage drop for the Dow Jones Industrial Average. If history repeated itself, the S&P 500 would have to fall about 18%, which would put it 25% below its January high.

But stocks ended 1987 up 10% from that dark day. Markets realized that there wasn’t any fundamental reason to turn bearish.

The best course of action would have been to hold your positions and wait it out.

Reverting to the Norm

It’s no secret that U.S. stocks are historically overvalued, as my colleague Michael Carr regularly reminds us.

For valuation purposes, I like to use Robert Shiller’s cyclically adjusted price-to-earnings (CAPE) ratio, which compares stock prices with corporate earnings over the past 10 years. Right now, at nearly 32, the S&P 500’s CAPE is the second highest in history. Only the dot-com mania was higher.

It’s also double the average historical CAPE. If markets were to revert to that average — just under 17 — the S&P 500 would have to drop 38%, or nearly 45% from its January peak.

Such a shift would probably require two things and take a little over a year.

First, there’d be a growing realization that investors could never recoup their stock investments through future dividend streams. Once enough people understood that the stock market is in the same position as the property market in 2007 — any further gains would be speculative — they’d bail to lock in profits … and achieve the opposite.

Second, returns on alternative assets like bonds would have to become more attractive. Given that Congress has just locked us into the largest budget deficits in history with no obvious way out, that’s quite likely.

The third scenario would involve accepting that the U.S. Treasury yield curve is trying to tell us something.

That means bond markets don’t expect any fireworks from the economy in the next few years — the opposite, in fact. If a recession had the typical impact on corporate earnings, the S&P 500 would drop by almost 27%.

The timing would depend on when the recession starts. If the Democrats recapture the House and immediately start impeachment proceedings, the fourth quarter is a safe bet.

We could interpret recent market volatility as a sign that the third scenario has already begun. I do.

But that doesn’t rule out the other two. The third scenario would involve elements of the second and could well trigger the first along the way.

My Bauman Letter has always been the place to explore your options in times like these … calmly and rationally. In fact, the upcoming May issue is devoted to exploring seven of them.

So keep your cool, and start making your plan to cope with a fearful future.

Editor’s Note: Matt Badiali designed his Front Line Profits research service to help people turn small, levelheaded investments into life-changing sums of money. That means no options trading, no margin requirements and no leverage of any kind … just rock-solid mining stocks that you can start trading today. Front Line Profits is every resource investor’s dream come true … but to get access to the latest opportunities, you must join the service by Tuesday, April 17, at midnight EDT. For all the details, simply click here now.