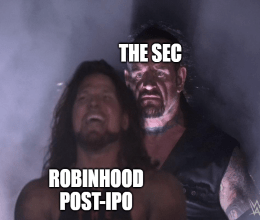 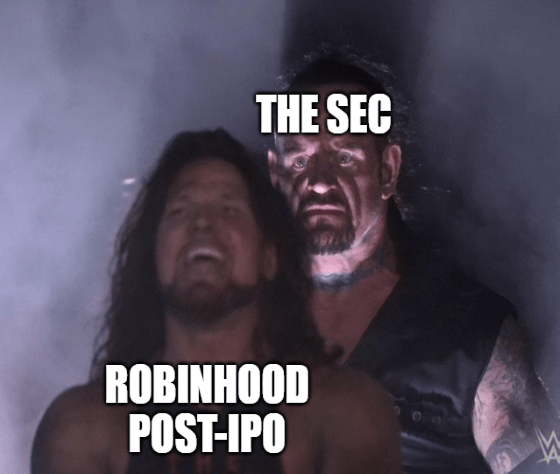 Robinhood (Nasdaq: HOOD) has had an insane, narrative-driven month: Fresh off its IPO, Robinhood saw the Cathie-Wood-driven “meme stock rally that’s not a meme stock rally.” But that ARK-fueled summer had come and passed, and Robinhood knows the innocent can never last.

This week saw HOOD shares fall another 10% — seemingly on the news that PayPal (Nasdaq: PYPL) will start its own stock-trading platform to rival Robinhood.

But that can’t be it, right? People only use PayPal when they’re forced to. Nobody’s choosing PayPal as their brokerage — or at least not their main, serious money account. So why is HOOD stock tanking?

An interview from Barron’s with SEC Chairman Gary Gensler makes Robinhood’s rabble-rousing much clearer: Its “payment for order flow,” or PFOF. It’s always been the problem.

Profiting off of order flow is literally Robinhood’s M.O. Normally, your brokerage seeks the best execution for your order: the fastest speed, the most likely execution and the best price.

With Robinhood, you make a trade in the app, and the order is routed to a market maker like Citadel Securities. Instead of giving you the best execution … Citadel’s using your shares to make bank by paying less to buy your shares than it can sell them for a microsecond later.

Now the SEC is saying that Robinhood’s trade execution is so bad for investors “that it more than outweighed the benefit they got from not having to pay a commission.”

The edge is the sheer trading volume that Robinhood’s routing Citadel’s way in return for a kickback on that order flow. You can read more here because this gets dense. Just know that when meme stocks became a thing (along with Robinhood’s countless scandals), the SEC decided to take a closer look at PFOF.

Now, according to Gensler, a ban on PFOF is on the table out of an inherent conflict of interest in the business model.

It provides an opportunity for the market maker to make more, and for ultimately the investing public to get a little less when they sell, or have to pay more when they buy … [Market makers] get the data, they get the first look, they get to match off buyers and sellers out of that order flow.

Gensler went on to add that tackling PFOF would help bring transparency and efficiency to the markets, further benefitting investors.

Now, I’m leery when the SEC harps too much on the “protecting investors” front, since the last time Chairman Gensler wheeled that one out was … well, last week when he talked up the “spirit of the law” with Mark Cuban (yes, that one).

But let’s go with the potentially foolish assumption that the SEC is acting in good faith here. I’ll reserve my jadedness for Robinhood.

PFOF has always made up a sizeable — and controversial — amount of Robinhood’s revenue. As in … it’s 80% of the brokerage’s business. Crypto, debit accounts, Gold memberships? All that’s chump change on top of Robinhood’s main payment-shuffle hustle.

So, what’s the argument for PFOF? I think it’s literally just Robinhood (well, and probably its institutional cronies) touting this angle:

We think payment-for-order flow is a better deal for our customers vs. the old commission structure. It allows investors to invest smaller amounts without having to worry about the cost of commissions.

Now, that’s not a complete lie — Robinhood does let anyone invest, whether you have $20 or $20 million. Why you’d use Robinhood with that much dough is beyond me, but nevertheless, the free account is a good deal for customers. In theory.

But subpar order execution and unfairly blocking stock-buying at crucial trading times is not a better deal for customers. Nor do they make for an equal and democratic trading platform. But so far, Robinhood’s gained enough new free-trading converts to offset those it’s peeved. Why change business?

Robinhood says that if PFOF was banned, it and the rest of the brokerage industry would be able to adapt. I mean, what else would it say? “Please don’t ban my best moneymaking operation?” We all know that the company’s execs must be dying inside right now.

Robinhood must maintain the guise that it’s on the retail investor’s side … that it’s not influenced by institutions like Citadel Securities on how it handles (and profits from) your orders each and every time you trade.

And, more importantly, Robinhood now must keep up the illusion that business will be hunky-dory should the SEC move to ban PFOF. That’s Robinhood CFO Jason Warnick’s story, and he’s sticking to it:

We do think because payment for order flow is such a small revenue stream — it’s about $0.02 to $0.025 per $100 traded — that it’s not a terribly difficult revenue stream for us to replace.

Now, I’m no pessimist — oh what am I saying … of course I am — but I just don’t see how Robinhood wipes off the PFOF ban and carries on as a business, living up to current revenue and earnings expectations. Robinhood’s peers would be fine, certainly … but Robinhood?

Literally every other big-boy brokerage has alternative revenue streams — PFOF revenue was the only thing Robinhood had going for it. That’s why it was able to kick everyone’s teeth in with a zero-commission model in the first place.

I mean, look at how much the other brokerages rely on PFOF (or not) by contrast:

For Robinhood, the ratio of its order routing revenue to average account value was 40,683, compared to 2,079 for TD Ameritrade, 891 for E-Trade, and 195 for Schwab, Alphacution found.

In other words, a PFOF ban would be a flesh wound for Schwab or E-Trade … but Robinhood? It’s skewered. Donezo.

Remember, Great Ones, there’s no such thing as a free lunch. If Robinhood’s offering a free product … you and your investing dollars are the actual product. Just how would Robinhood milk that money from its account holders if PFOF were banned? Crypto revenue?! Please.

Unless… You wouldn’t think…

Would Robinhood have to start charging commissions? Become the commissions-fiending brokerage it sought to destroy? That’d really rattle off the retail investor sentiment … Robinhood’s lifeblood.

You tell me in the inbox: How does Robinhood move on without PFOF? Do you have strong feelings about Robinhood? Do you not care one way or the other how Robinhood makes its money … even if it’s off of your trades?

Write in and let me know!

The biggest, most successful companies are throwing down gobs of money to upgrade their 5G infrastructure. But all these companies will rely on a small firm based in California. My colleague Ian King has created an entire presentation telling you everything you need to know.

In case you didn’t know, Ian has averaged a 145% gain per trade across 41 positions over the last two years. And this is one of his top recommendations of the year. In other words, you don’t want to miss this!

All I Wanna Do Is Zoom-A-Zoom-Zoom 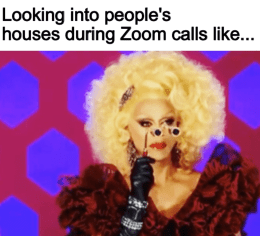 While the teleconferencing company reported its first $1 billion quarter — and beat Wall Street revenue expectations — Zoom anticipates demand for its app to slow down as people swap sweatpants for “real clothes” and head back to the office.

Well … many people. I’m not giving up “gym short chic” until I’m dead and gone. Anyway … Zoom was the go-to communication app for office workers turned teachers, babysitters and at-home chefs when COVID-19 sent us all into lockdown.

But now that pandemic restrictions have lifted, Zoom will need to find new growth avenues as life returns to normal. And no, I don’t anticipate its bizarre Zoom Phone plan to actually click with office workers who, you know … already have phones.

Fasten your seatbelts, all ye Zoom stock enthusiasts. It’s going to be a bumpy ride. 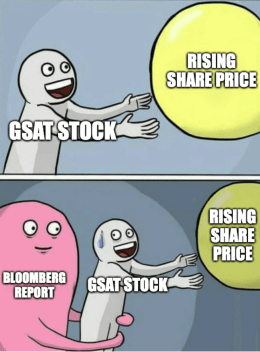 Word on the street is that Apple’s (Nasdaq: AAPL) iPhone 13 might support space-based satellite communication. Excellent news! Now I can finally phone the mothership and get off this blasted planet. (Sorry, I love y’all Great Ones, but…)

Apple’s stayed mum on all the rumors, but everyone took the news seriously and started dreaming of no-cell-signal calls and texts. Analysts initially said the iPhone would use technology from satellite operator Globalstar (NYSE: GSAT), and investors pushed GSAT to the moon.

For those of you who don’t spend your free time looking for satellites, Globalstar operates a satellite constellation that could help Apple with all its space-based service coverage needs, signaling a potential partnership. I say “could” here because my space-calling dreams were dashed as quickly as they were hashed.

GSAT shares rocketed 68% higher on Monday only to crash 18% this morning after a Bloomberg report said Apple’s satellite feature likely won’t be ready until 2022. Oh, and did I mention it was for “emergencies only?”

And here I was getting all excited about the E.T. meme possibilities … thanks for being a buzzkill, Bloomberg.

Speaking of Apple, remember how I told you last week that U.S. app developers filed a lawsuit against the company for its anticompetitive behavior?

And how Apple has spent years forbidding app companies from letting its own customers know about cheaper payment and subscription options outside of the App Store?

An Apple spokesperson said the new bill will decrease user trust in future App Store purchases, while a more contrite Google said it plans to “reflect on how to comply with this law while maintaining a model that supports a high-quality operating system and app store.”

I love it when Big Tech companies take the time to “reflect” on their shady dealings, don’t you? And we haven’t even brought up Amazon yet…

The e-commerce giant is targeting the live-audio industry to compete with Clubhouse and Spotify for total airwave control. Personally, I still don’t see the appeal in the rebirth of party lines, but if Amazon is interested in something … the appeal is probably “moolah.”

Amazon’s Music division will strongarm — I mean, “partner” with musicians and celebrities to bring live conversations, shows and events to its streaming app. Think of it like AM meets FM radio, minus all the static and ads for home and auto insurance.

Y’all can keep your chat lines … but the at-home concert experience that Amazon wants to peddle is something I could actually get into — especially if it transitions to live video streams via its broadcast platform, Twitch.

Personally, I think we all could have used a little more music to get us through the last year and a half of BS, which makes me wonder if Amazon knows something the rest of us don’t. Hmmm…

And that about wraps us up for today, Great Ones! But don’t think that our meme-filled romp through the market has to end here. Oh no! The Great Stuff team and I are waiting around on pins and needles for what comes next: your Reader Feedback!

If you ever have questions, concerns or just want to say howdy, GreatStuffToday@BanyanHill.com is where you can reach us best. 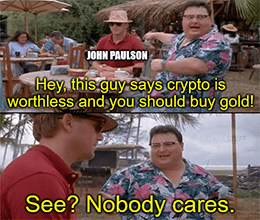 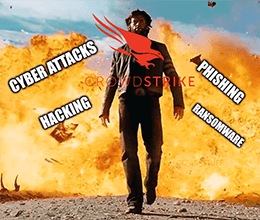