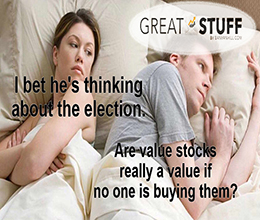 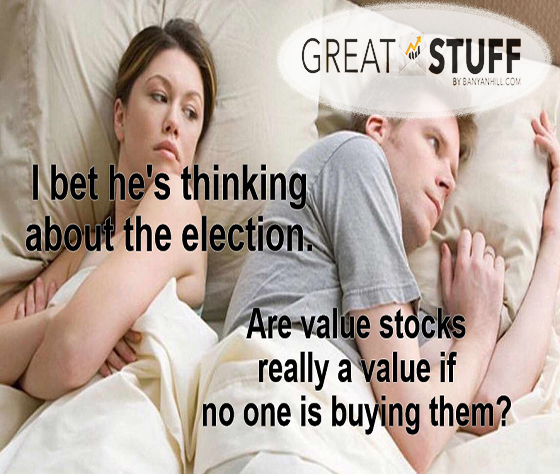 Georgia on My Mind

No peace, I find. Just an old sweet song about value stocks keeps Georgia on my mind.

Welcome to 2021, Great Ones, where stock prices are made up, and valuations don’t matter. Or do they?

According to JPMorgan Cazenove — a London-based division of JPMorgan proper — the Georgia Senate special election could hold the key to investing in value stocks.

The logic goes like this: If the Democratic challengers win, the Democrats will control the House, Senate and the presidency. JPMorgan speculates that if this happens, the U.S. dollar will fall, and bond yields will rise.

“This might weigh on the overall market in the very short term, but it could also catalyze the next leg up in value rotation,” JPMorgan said.

However, JPMorgan thinks this is a long shot. It expects the incumbent Georgia Republicans will win, and “anything different would be a genuine surprise.”

So, where does JPMorgan think you should set your investment sights? Germany and Japan. Both countries recovered slower than the U.S. and China last year and look attractive due to a weakening dollar.

Stateside, JPMorgan believes that risk assets — aka all the growth stocks that boomed in 2020 — will continue higher in the first half of 2021 regardless of who wins in Georgia.

Personally, I’m not so sure about this assessment. For risk assets to continue higher, investors need capital. Not everyone has a direct line to the Federal Reserve, so … where’s that capital coming from? (More on this in a few!)

If you want my full take on the best stocks to own for 2021 — all of which are value-oriented — check out “3 New Picks: The Flier, the Phoenix and the Mouse Mogul“. You won’t regret it.

(And if you thought I would comment directly on the Georgia election, you’re outta your freaking mind.)

Editor’s Note: Here’s what no one else will tell you about retirement…

The average American has roughly $100,000 in retirement savings — whoooa! Big spender! — but my colleague Ian King uncovered a simple strategy with the potential to turn that average retirement account into as much as $1.2 million — in just five years!

It doesn’t matter how much you have saved for retirement already. You may have more or less than the $100,000 average, but Ian King wants to show you how you will grow your savings roughly 10 times over — in just the next five years.

He explains it all to you right here. (Click me!)

After Roku proved the bears wrong by killing it with ad revenue and subscriber number, the company kicked off 2021 with content acquisition.

Normally, this would be excellent news for Roku. Content is king in the streaming wars, after all. But … can we really consider Quibi as content?

Yes, Quibi — the failed short-form streaming service for mobile phones … and only mobile phones. Roku is reportedly in advanced talks to buy Quibi’s entire catalog of streaming content, including such hits as “Most Dangerous Game,” “Dummy” and “Murder House Flip.”

There are multiple problems with this idea, however.

First, Quibi content is only about 10 minutes long — roughly the length of regular broadcast TV once you remove the commercials. Second, Quibi already failed. If this content was any good whatsoever, the service would still be up and running … possibly.

Quibi’s real trouble was that you couldn’t watch any of its programming outside of your mobile device. Roku wants to set that content free onto the TV screen. While I don’t like Quibi content, I understand that I’m not its target audience. What’s more, content is content, and Roku could always use a little more.

The key to this rumor, should it come to fruition, is the price tag. Neither Roku nor Quibi have commented, but if the price is right, Roku might have a steal on its hands. 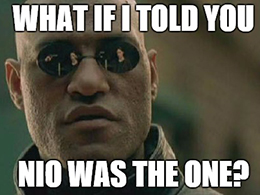 You can’t see it. You gotta feel it. It’s electric!

Nio announced record deliveries for December, with annual deliveries soaring 112% to 43,728 EVs. The company also announced a used-car service, a trading platform and plans to invest $460 million over the next five years for a nationwide Nio Service network.

Stateside, Tesla reported 180,570 EV deliveries in the fourth quarter, bringing its total for the year to 499,550 units. While the company just missed its 500,000-delivery goal, Tesla thinks that final numbers could vary by 0.5% or more.

So … you’re telling me there’s a chance?

All in all, it was a good report for both companies. Both hit record deliveries for 2020 and have high hopes for 2021. On the news, NIO jumped more than 11% before it closed lower, while TSLA spiked 5% and also slipped heading into the close.

Since I get so many Great Ones writing in to say: “Why don’t you be clear and tell us if these are buys or not,” neither NIO nor TSLA are buys at these valuations. However, if you are the speculative type, NIO has more upside and growth potential. It’s smaller than Tesla, so that underdog potential goes without saying. 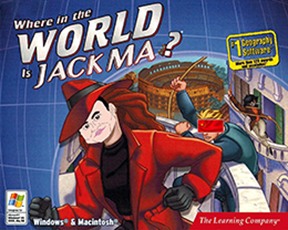 The founder of Alibaba (NYSE: BABA) and Ant Financial hasn’t been seen in public since October.

In the meantime, China demolished Ant Financial’s IPO quest and has launched an antitrust investigation against Alibaba.

I guess Ma shouldn’t have called Chinese banks “pawnshops.” But whether Jack Ma is at a “Chinese rehab” or just taking a break from public life remains to be seen.

What is apparent is that Amazon (Nasdaq: AMZN) now operates without its biggest online competitor. Sure, Alibaba still exists, but it’s in truly dire straits … and we’re not talking playing guitar on the MTV here. (Oh, that ain’t workin’.)

Furthermore, Amazon quite literally gets its money for nothing. The leading online e-commerce company cleaned up in 2020, as millions of pandemic-stricken consumers turned to Amazon for speedy deliveries. Seriously, order something from Amazon at the same time a competitor ships that item by the U.S. Postal Service and wait … and continue waiting for long after your Amazon order arrived.

That’s the way you do it. Let me tell you, them guys ain’t dumb. What is dumb is that AMZN isn’t at record highs. How is that even a thing?

Between online shopping dominance and Amazon Web Services (AWS) — which hosts everything from Netflix, Disney+ and Zoom to Facebook and the BBC — AMZN should trade much higher than they do now. And that’s before Alibaba ran afoul of Chinese regulators.

If you don’t own AMZN for specific reasons — such as “I support buying local” or “I support a living wage” — I get it. Those are very admirable reasons to not invest in AMZN. But … you still sell your portfolio short.

AMZN isn’t an official Great Stuff Picks recommendation — for specific reasons, but not those listed above. Though, you should definitely consider this stock if you have the means to invest. It trades for more than $3,000 per share, after all.

Welcome to the first Chart of the Week of the year!

So far, 2021 is looking a lot like 2020. Everyone’s worried over a 2% “correction” and dreams about how to spend that newly inked stimulus check. Obviously, this isn’t new terrain. But we are only four days into the new year, so let’s see what happens…

Despite whatever value-stock rotation might spring from the Georgia grapple, the same factors that spurred last year’s disconnect between a ravaged American Main Street and the booming Wall Street are still very much in play.

That’s why we’ve teed up a game of “Follow the Money Trail” — namely, how stocks could possibly reach new all-time highs (until today, at least) while everything else in the world seemingly falls apart.

In short, from last March to November:

It sounds simple on paper, right? But every facet of this equation has changed unequally over the course of the pandemic.

For instance, employers reported they had 6.1% fewer jobs on payroll in November. Yet, employee compensation as a whole was down “only” half a percent — for a total $43 billion in lost wages.

Job and income changes aside, personal income, on the whole, soared during the pandemic. When you add up unemployment insurance benefits under the CARES Act, stimulus checks and all other income, total disposable personal income rounds out at about $1.03 trillion.

That’s all fine and dandy, Mr. Great Stuff, a real optimistic way to get my new year started… What does this have to do with the price of a Peloton in Pittsburgh?!

You’ve heard me harp on “consumer confidence this” and “consumer spending that” all last year, so here’s where that comes into play. The chart below shows where folks spent money through November. 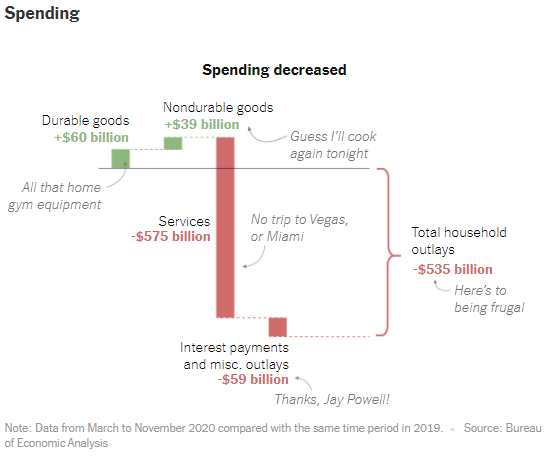 Familiar, huh? Just like Great Stuff has told you all throughout the pandemic, money isn’t going toward the typical entertainment and services streams like it once would. Consumers instead favored at-home spending to make quarantine a bit healthier or homier. Forget bikes — think of the Rokus!

And, in the surplus of all this spending, a cash-sloshing propped-up market was formed.

While we can thank the Fed’s endless generosity for keeping the market pent at ever-increasing highs, it’s not like Mom and Pop investors didn’t get in on the action either.

Put that stimulus check into savings? Pshaw, as if… Saving account deposits were only up 19% since the first week of March. Who wants mere pennies worth of interest when there’s a great, wide market to go blow cash in?

My main question is this: As those money printers brrrr away, we’re creating even more of a cash deluge right into this market. But what do you do when everyone’s “all in?” What happens when volatility hits while half the country’s stuck holding the bag at all-time highs?

So, Great Ones, how’s January treating you so far? Are you still feeling that New Year’s optimism?

Why not take a sec to share what’s on your mind with us today?

GreatStuffToday@BanyanHill.com is the perennial place for the thoughts you’ve been stewing and the rants you’ve been brewing since last year. 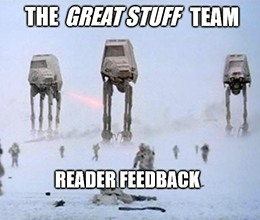 On the Eve of Greatness: A Feedback Finale 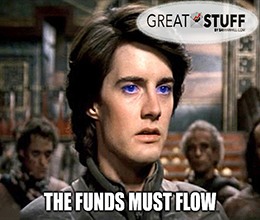