Under-The-Radar Stocks That Outperform the S&P 500

I came across a recent headline: “If you don’t own these four stocks, you’ve missed half the market’s gain this year.”

A correct way to put it would be: “If the S&P 500 Index didn’t have these four stocks, its return would have been half the market’s gain this year.”

Because the S&P 500 is weighted based on the market cap of the companies inside it.

So instead of thinking about which companies in the S&P 500 carried it higher, you should think about which smaller companies are significantly outperforming the index.

Finding those opportunities is how you outperform the S&P 500. Let me explain.

If you care about which stocks make up the S&P 500’s gains, you’re looking at stocks with a higher market cap, like Apple Inc. (Nasdaq: AAPL). But you would be missing a stock that carries much less weight in the index while soaring higher, like Abiomed Inc. (Nasdaq: ABMD).

Take a look at the performance for all 500 stocks in the S&P 500 so far this year, with an emphasis on where Apple and Abiomed fall. 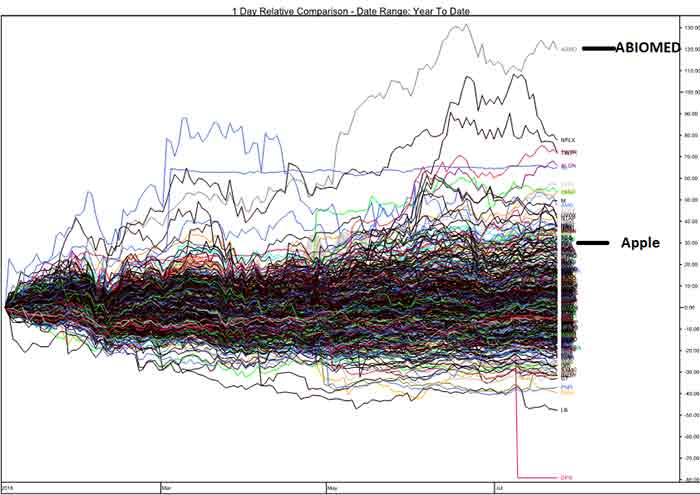 Even though Apple was, according to the article, one of the four stocks you needed to own to achieve the S&P 500’s 6% gain so far this year, it falls well in line with dozens of other stocks.

Meanwhile, Abiomed soared more than 120% since the start of the year, but there’s no mention about how that played a part in the market’s rally.

That’s because with such a small market cap, just $19 billion versus $952 billion for Apple, it has a minimal impact on the S&P 500’s daily return.

If you want bigger and much more rapid returns, you need to find these under-the-radar stocks that can soar higher.

Debt Is Through the Roof, and the Market Loves It