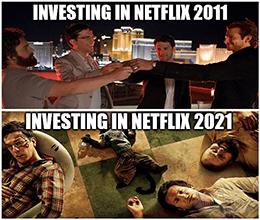 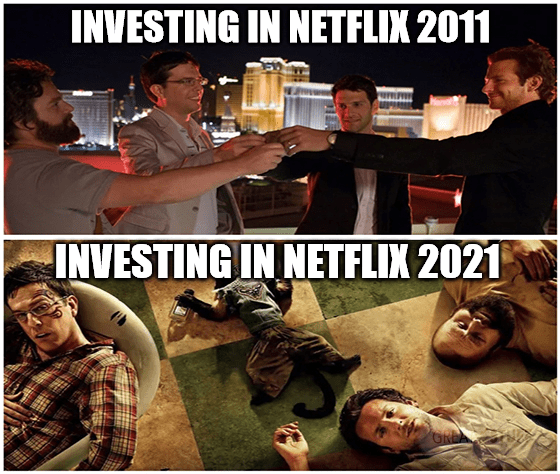 The Sultan Of Stream?

Netflix (Nasdaq: NFLX) investors got a shiver in the dark. It’s raining in the park, but meantime…

South of Wall Street, you stop and read everything. And if you read Netflix’s second-quarter report or my write-up on the streaming giant’s first-quarter report … well, you’d understand.

Back in April, I declared: “Netflix is no longer a high-growth tech stock. It’s now a blue-chip company. And that will change how investors all across Wall Street approach the stock.”

That declaration played out in spades. After the close last night, Netflix missed earnings expectations, eked past revenue targets and whiffed on subscriber growth.

To paraphrase Cinderella, Netflix might be falling apart at the seams.

So, if you’re saving it all for Friday night … you might want to rethink that decision. 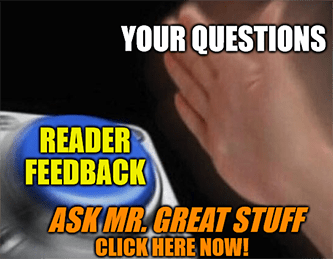 So, nobody expected great things from Netflix’s second-quarter report. But Wall Street did expect better than what it got. Specifically, new subscriber adds weren’t expected to be very high given how many people signed up during the COVID-19 pandemic.

But Netflix missed even those lowered expectations. And not only did it miss on subscriber adds, it also missed on earnings. This means costs are rising for Netflix even as the company struggles to maintain subscriber growth. This is not a good combination at all.

Now, Netflix typically uses guidance to help assuage some of those growth concerns. But not this time.

Looking at the third quarter, Netflix expects to add 3.5 million subscribers — well below the 4.87 million analysts expect. Both Netflix and Wall Street are banking on the company’s delayed slate of content, since Ozark, Stranger Things and The Witcher are scheduled to hit in the second half of 2021.

However, I don’t believe that either Wall Street or Netflix is accounting for how much most people just don’t want to stay inside anymore. Furthermore, streaming budgets are already stretched to their limit with Hulu, Disney+, Amazon Prime, Discovery+ … there are just too many services.

My point is this: The streaming market is saturated. Consumers have subscription fatigue, and everyone just wants out of the house right now. In other words, Netflix’s growth from here on out will be considerably slower … no matter what “gaming” experiences it thinks up. Seriously. Netflix original games? I can’t even right now…

That doesn’t make Netflix a bad investment. It just isn’t the high-growth tech play it once was. Last night’s quarterly report and third-quarter forecast prove it: Netflix is now a blue-chip, value stock … in much the same way as wireless providers and cable TV purveyors.

It’s time to stop focusing on subscriber growth and zero in on Netflix’s financials. Given that the company is still spending like a tech startup, I expect more volatility until the company settles into this new reality.

Last year, my colleague Adam O’Dell called both the top of the coronacrash AND the bottom of the sell-off … enabling readers of his publications to walk away with profits on both sides of the crash.

Adam knows it’s no longer enough to beat the market. To realize the biggest gains these days, it takes what he calls “market breakers” — a category of stocks that crush the market.

I just looked at his Weekly Hotlist, and some of the “market breakers” he’s identified over the past year have reached peak gains of 698% in eight months … 554% in seven months and 561% in five months!

Get the full story from Adam when you click on this link right now.

Good: Bring Me The Verizon 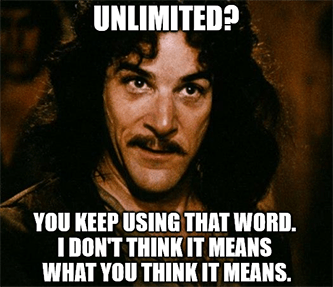 I’m just as surprised as you. In the face of T-Mobile and Sprint combining their strengths into a wireless Voltron … Verizon Communications’ (NYSE: VZ) double-beat-and-raise report is even more impressive.

Per-share earnings came in at $1.37 to top estimates for $1.30 per share. Revenue reached an impressive $33.76 billion and beat predictions for $32.77 billion. Going forward, Verizon expects revenue to grow between 3.5% and 4%, raising its original estimate of 3%.

Subscriber adds? Pssh, don’t even worry about ‘em… Verizon’s lucky enough that its subscriber churn was only 0.65% last quarter.

When you get down to it, minimizing subscriber cancellations is all that’s exciting for VZ investors these days — well, that and selling off bits of the Verizon dinosaur, such as the company’s media business.

This is just how she goes … media companies age like dying stars. Verizon is — and will forever be — a value stock. If it’s able to sustain its measly earnings and revenue growth while the telecom competition ramps up, that’s probably the best-case scenario for Verizon.

Just like Netflix is now realizing, the growth-heavy salad days are over. Gone. Done-zo. If anything, this kind of subscriber churn is what streaming companies like Netflix have to look forward to.

Better: If Looks Could Grill 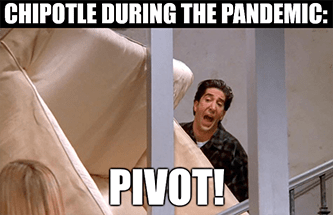 The burrito bistro’s revenue came in a hair over expectations — $1.89 billion versus $1.88 billion. On the other hand, earnings totaled $7.46 per share and walloped analysts’ estimates of $6.52 per share.

Same-store sales are up 31.2%, but more importantly, digital sales now account for nearly half of Chipotle’s revenue.

I guarantee you that Chipotle’s bouncing back better than its peers because of how many ways it can take orders. In other words, the efforts it put into online ordering during the pandemic are still paying off after lockdowns.

While digital ordering is bound to slip somewhat as more people choose to dine in, Chipotle’s making it easier for those customers who do want a quick, mostly online experience. 45 of the 56 restaurants Chipotle opened last quarter have a drive-thru lane that’s only for online orders.

Drive-thru lanes. Who’d have thought? It’s a tiny operational difference that boosts the company’s bottom line. And no, they didn’t hire yours truly to name these the “Chipotlanes” … but as Great Stuff’s official Pun Director, I approve nonetheless.

Think of how a Chipotlane streamlines the entire process for both the customer and Chipotle: If you’re ordering online, you don’t even need to go inside the store. If you’re eating in, you don’t have to wade through dozens of people standing around waiting for their online orders.

Throw in some online-only exclusives — virtual quesadillas, what what! — and this is what the biz calls a successful pivot.

Best: Do The Bitcoin Bounce 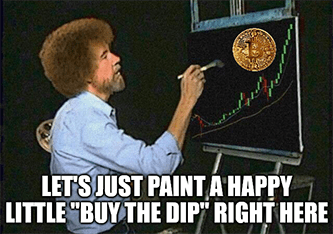 Calling all Bitcoin (BTC) lovers! I sincerely hope y’all bought in when bitcoin dipped below $30,000 … ‘cause that was a serious buying opportunity.

I mean, all you had to do was look at bitcoin’s chart. $30,000 has been a pivot point for bitcoin since the beginning of the year.

That price point provided a floor during the first “value crisis” back in January and February, and it’s holding firm once again, supporting BTC since early May.

Now, as all you seasoned bitcoin “hodlers” know, cryptocurrencies can be volatile. There are risks involved, but the payoffs are ginormous. That’s right, I said it. Ginormous.

Right now, bitcoin is rebounding from price support. And there’s a looming confrontation that could send BTC and other cryptocurrencies soaring even higher in short order.

That confrontation will arrive near $34,600 for bitcoin. This area is home to BTC’s 50-day moving average — a trendline that has dogged the cryptocurrency lower since mid-May. With COVID-19’s resurgence sending Wall Street into a conniption fit, bitcoin could once again benefit from a flight to safety.

Such a tailwind could send BTC skipping past its 50-day moving average and onward toward even bigger gains. And it’s not just bitcoin that will benefit — a tailwind for the biggest crypto in the world lifts all boats, as they say.

If you are a bitcoin veteran or a crypto newbie, buying the dip in cryptos right now is the way to go.

Now, some of you may still be unsure how to get started investing in cryptos like bitcoin, dogecoin or Ethereum. Well, be unsure no more — we’ll get you started on your path to crypto supremacy!

If you couldn’t tell already, it’s crypto day here at Great Stuff. And what perfect timing for a new Poll of the Week!

Today, we want to know one thing and one thing only: Did you buy the crypto dip? I don’t mean just bitcoin, either. What’d I just tell you about a rising crypto tide lifting all coins?

If you did buy the crypto dip, which coins did you cash in on? (I know, I lied … this turned into two questions.)

Don’t see your crypto of choice in the poll? You must be on some other level of crypto trading we’re just not ready for… Why not enlighten me on your crypto plays in the inbox?

Let us know what crypto coins you’re invested in — and why other Great Ones should follow your lead.

If you’re quick on the draw and write to us today, you might even see your mad crypto raving in tomorrow’s edition of Reader Feedback. So, drop us a line, won’t ya?

By the way … if you’re having trouble figuring out how to get into the crypto market, we’ve got you covered! (How about that?!)

One of my colleagues has nailed almost every major bitcoin call over the last four years … and he is predicting a massive comeback. Everything is right here.

While you check that out, let me know if you have any questions, comments or just want to rant and rave about the market. From crypto to Chipotle, if it’s on your mind, it belongs in our inbox. So write to us sometime, won’t you?

GreatStuffToday@BanyanHill.com. You might just see your hot takes in tomorrow’s edition of Reader Feedback! 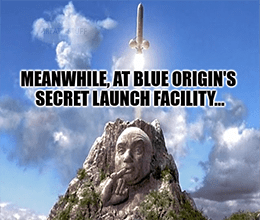 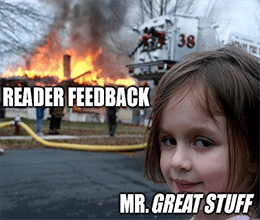