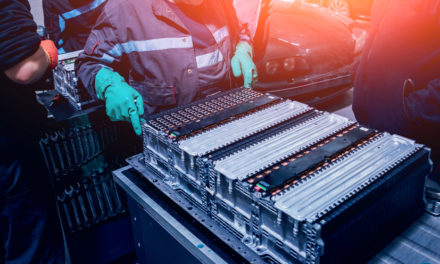 Green energy is a hot sector in the market today. It’s a big story.

Every day, there’s something in the news about it. You simply can’t get away from stories about electric cars, carbon fears and politicians opining on the subject.

Many investors followed Wall Street’s hype stories into stocks related to the sector.

And lithium, an innocuous, soft gray metal used in rechargeable batteries, was the most popular. It was dubbed the key “battery metal.” Investors flocked to buy anything related to the metal.

Companies that produced and explored for lithium exploded in value. Many investors confused the big-picture story with their investment strategy.

But here’s the thing: The stocks are just companies. They aren’t the big story. And lithium miners are particularly vulnerable to problems that have no relationship to electric cars.

When the price of lithium began to fall, so did shares of the miners. But investors clung to the big story and many failed to get out.

That’s a common mistake. We see it in many sectors with big stories, such as cannabis, tech and medicine. Investors fall in love with the big story and fail to manage their investments.

We should never, ever invest in small, high-risk stocks without an exit strategy.

No matter how compelling the big story, sometimes selling your stocks is the best way to protect your wealth.

In 2014, it completed a study that showed the mine could be built and run economically.

The company began working to turn the discovery into a mine. The project coincided with a run-up in the price of lithium and massive excitement around the metal.

The big green energy story exploded. Electric cars were going to be everywhere. There weren’t any doubts.

You can follow its incredible run-up (and eventual implosion) in the chart below: 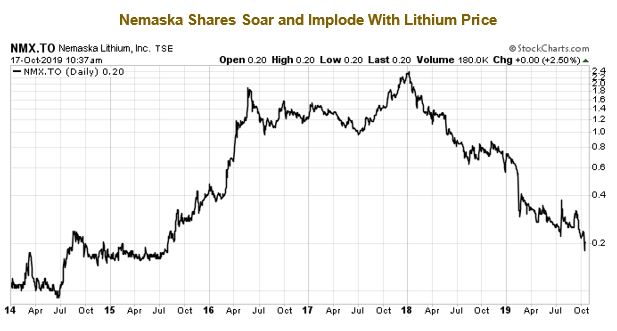 That’s a 2,300% gain. However, most investors bought in closer to the top than the bottom…

See, back in December 2016, the Solactive Global Lithium Index added the company to its members.

The index put together a diverse group of mining companies to meet investor demand for “battery metal” producers. That brought it to the attention of a huge number of investors.

The stock tracked lithium prices, which peaked in May 2018 around $296 per metric ton. The lithium price fell steadily after that. It’s currently at $161 per ton and still falling.

The problem was oversupply. As the price climbed, the big lithium producers ramped up production … a lot.

It flooded the market.

However, few investors wanted to hear about too much lithium stocks. They wanted the big-picture story to be correct. Instead of selling, they held the stock and hoped for the best.

The thing is … hope is not an effective investment strategy.

That’s a common trap for too many investors.

They cling to hope instead of having a real exit strategy. But here’s the simple math.

If a stock falls 50%, it must double to get back to zero. And it only gets worse from there.

But if they had used a trailing stop, they would have sold.

In my Front Line Profits portfolio, we usually use a 50% trailing stop on our risky positions. If we’d owned Nemaska Lithium, our stop would have triggered at $1.20 — 50% of its highest price of $2.40.

Instead of sitting on an 83% loss, we would have gotten out even.

And we’d be sitting on cash, waiting for Nemaska to find a bottom, instead of hoping shares would rally 600% for us to get back to even.

Remember: In high-risk small-cap stocks, you absolutely must have an exit strategy.

The big electric car story is still in place. And there will be ways to make a lot of money on it. But sometimes the stocks we buy don’t behave the way we want them to.

That’s why we always go into a trade knowing how much capital we’re willing to risk — and a plan to get out.

Sometimes, you must sell to protect yourself.

P.S. My 3Px approach is a proven way to identify small-cap stocks that will be 1,000% winners in the next 12 to 18 months. I’ve used this strategy to help grow my parents’ wealth. To learn how you can access the most promising rising stocks in sectors including cannabis, oil, gold and more, click here now! 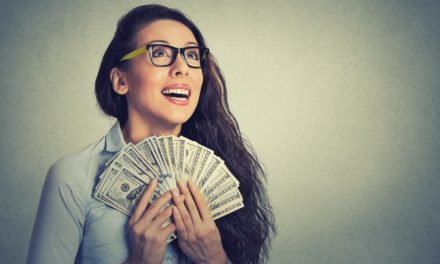 Working-Class Folks Turned Millionaires — Here’s How They Did It 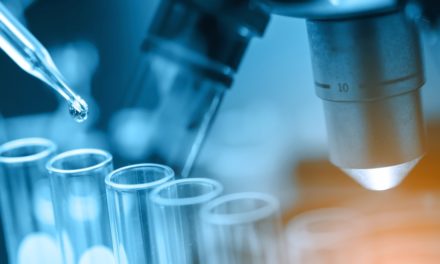