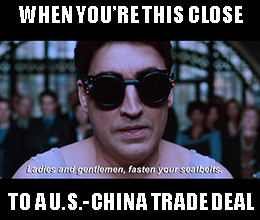 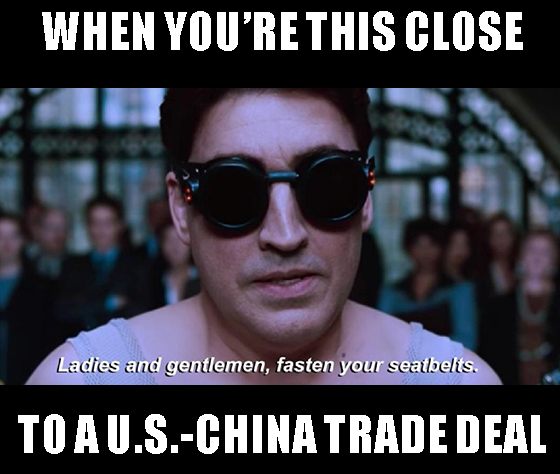 Hold on to your hats, ’cause we’re going on quite a ride over the next week.

Yesterday, President Trump appeared to punt the U.S.-China trade deal until after the 2020 elections. Today, however, we’re getting a different story. (And if you’re not used to this back-and-forth by now, you’re not paying attention.)

Bright and early this morning, Bloomberg reported that the U.S. and China are moving even closer to a “phase-one” trade deal. Where is Bloomberg getting its information?

Why, the infamous “people familiar with the talks,” of course!

According to these people, the two sides need only agree on issues including Chinese agricultural purchases and which tariffs to roll back. The “people who shall not be named” also said that the markets were making too big a deal out of Trump’s off-the-cuff comments about stalling until 2020.

What’s more, a phase-one U.S.-China trade deal is expected to be reached before tariffs rise on December 15. That’s in less than 11 days.

Aside from the obvious “we’ve heard all this before,” there are three very important points to take away from the Bloomberg report:

Great Stuff regulars will remember back on November 5, when I asked: “Who’s winning the U.S.-China trade war?”

At the time, I posited that China had the upper hand due to the reported promise of massive tariff rollbacks. Media reports at the time indicated that at least $112 billion in tariffs were on the table to pass a phase-one deal.

I’m sure you can see where I’m going with this.

President Trump has the last and final word in these trade negotiations. A deal will happen if he wants one — his own words, paraphrased, not mine.

So, call me pessimistic … call me a bear … call me whatever you’d like. I’ll be playing it safe and holding my enthusiasm until a deal is actually signed and we can read the details.

In the meantime, there’s nothing that says we can’t profit off the continuation of the Great Stuff Trade War Cycle chart. I just updated it this morning: 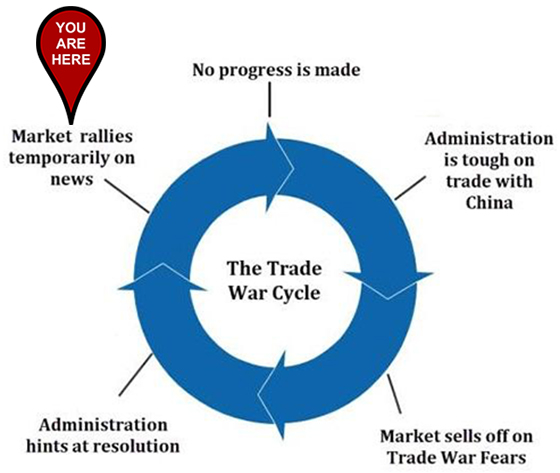 I’ll add one more thing here. If you are trading this cycle, remember that we have just 11 days until the December 15 deadline for tariff increases. We could go through this cycle rather rapidly if U.S. representatives, China or Trump decide to get chatty.

Be warned: Trading the chart might not be for the faint of heart over the next week.

The Good: Turn the Page 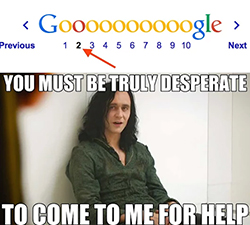 It’s the end of an era at Alphabet Inc. (Nasdaq: GOOG).

Google cofounders Larry Page and Sergey Brin are stepping down from their positions at Alphabet. Taking their place at the head of the world’s most popular search engine is Google CEO Sundar Pichai. Pichai will now head both Google and its parent company, Alphabet.

Despite the high-profile announcement, Pichai and Chief Financial Officer Ruth Porat have essentially run Alphabet for some time now. Pichai actually testified in front of Congress in 2016 … not Page or Brin.

So, what does this mean for investors? Pretty much nothing. Honestly, Pichai unofficially took the reins of Alphabet nearly two years ago. It should still be business as usual.

However, analysts are speculating that we may finally see YouTube revenue figures. Alphabet wasn’t required to disclose these figures before because Page — the company’s appointed decision-maker — didn’t see them. Seems like an odd loophole in reporting requirements, but it is what it is.

Pichai, however, does see these reports. So, investors might finally get a peek at YouTube’s revenue.

Whether that’s a good thing or a bad thing remains to be seen.

The Bad: Weak in the Force 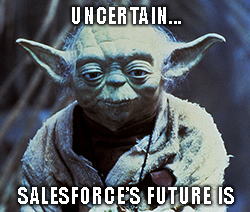 For all intents and purposes, Salesforce.com Inc.’s (NYSE: CRM) earnings report was spot-on.

The company beat both top- and bottom-line expectations, with earnings up 32% and revenue soaring 33% year over year. Subscription revenue spiked 32%, and even billings were above the consensus estimate of $3.89 billion.

Guidance is where things started to go wrong … if you can call it that. Forecasts for the 2020 fiscal year were above Wall Street’s projections, but Salesforce put 2021 revenue projections below the consensus estimate. How far below? About $500 million.

If you’re thinking that this isn’t a “bad” quarterly report at all, you’re not alone. Analysts from Morgan Stanley, Goldman Sachs, RBC Capital Markets and Wedbush Securities all came out to defend Salesforce’s quarterly report.

That’s quite a star-studded cast. And it might explain why CRM is down more than 3% after what was a solid financial performance. Essentially, there’s too much optimism on CRM right now. So much so that a $500 million miss on revenue guidance two years from now is enough to prompt investors to sell.

That’s bad. It’s a sign that CRM might need a profit-taking correction to wash out the weak hands before the shares can turn higher once again.

The Ugly: The Un-Bear-able Rise 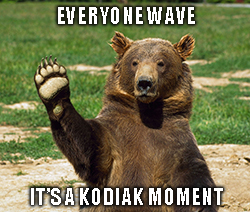 In the past three trading sessions, shares of Kodiak Sciences Inc. (Nasdaq: KOD) have surged an astonishing 100%.

Part of the reason is the increased bullish hype in the biotech sector, driven by merger and acquisition speculation.

But the big reason is that Kodiak just sold a 4.5% royalty right on potential global net sales of its experimental drug for eye disease, KSI-301. New York investment firm Baker Bros. Advisors shelled out $225 million for the rights.

Investors are excited because now Kodiak has the cash to fund operations through the next couple of years, at least. But Kodiak doesn’t get all that cash up front. It’ll need to pay $100 million just to close the transaction, and it’ll need to reach 50% enrollment in two late-stage clinical studies of KSI-301 in treating retinal vein occlusion, or blocked blood flow in the eye.

By now, you’re probably wondering why this is “ugly.” Well, the $225 million apparently wasn’t enough for Kodiak. Or, it saw the massive run-up in its shares and decided to take advantage of the situation.

Today, the company announced it was pricing a public offering of six million common shares at $46 per share — 55% above last Friday’s closing price.

This is clearly a smart business move, but my mind can’t get past the convenience of the offering or the KOD share dilution.

Once again, I think there is just too much optimism floating around out there. This is definitely a “buyer beware” situation.

Just when I thought I’d seen everything.

Hollywood is actually making WeWork: The Movie. I kid you not. They’ve even gotten Charles Randolph, the writer for The Big Short, to do the script.

This brings up two points. First, Hollywood really is out of good ideas. Second, who wants this movie? I’m not going to see it. If you’ve followed Great Stuff through the WeDebacle, you already watched this live.

Then again, given the media reports of former CEO Adam Neumann’s pot smoking and parties … this could be a fun ride. Look, I even made a poster for it: 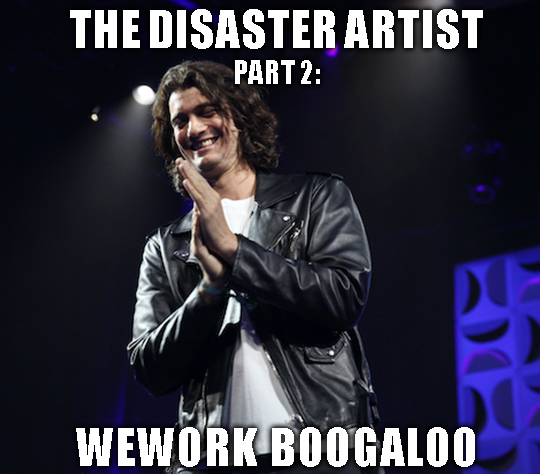 (Side note: Did anyone actually see The Disaster Artist? I thought not.)

Great STUF: Buy Into Tesla for $1!

Did that heading get your attention?

First, there’s no need for name-calling. I’m rubber and you’re glue, after all.

Second, yes, there is a way. And none other than Banyan Hill expert Paul himself has the answer!

Paul found the quickest and easiest way to buy into some of the most exciting and explosive stocks on the market. Paul likes to call these his STUF stocks — a handy little acronym for the key stocks that represent the heart of Bold Profits: innovation, future, new-world ideas and tech that changes the way we live.

This is truly great STUF … if you catch my drift.

I know you’re dying to know more, so read Paul’s latest article now! Here, I’ll even give you the link: “Easiest Way to Buy STUF Stocks (Ex: Buy Into Tesla for $1).”

Paul has a free report on all of his STUF stocks, and you can get it right here! (Did I mention it was free? Of course I did.)

The only way to truly satisfy your craving for STUF stocks (and Paul ) is to check out his newsletter, Profits Unlimited.

Click here to find out how to start your STUF collection now!

(I feel like there are too many exclamation points down here. Are there too many? Nah. Just the right amount.) 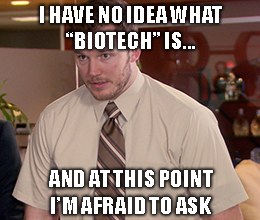