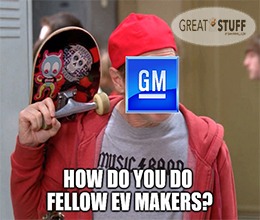 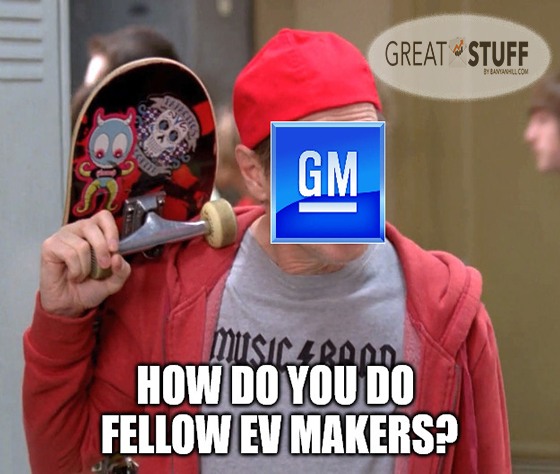 Trouble-free transmission. Don’t let that oil flow. Got no need to pump your gas; GM will do it all.

I don’t know too many people who actually know the lyrics to “Trampled Under Foot” by Led Zeppelin, but … there you go.

GM was already a growing threat to the EV market after it announced its all-electric future initiative, but this new partnership could shake the industry to its core. So, what are the details?

Microsoft partnered with GM, Cruise (GM’s self-driving car division) and Honda Motors (NYSE: HMC) in a long-term strategic relationship to make self-driving vehicles. As part of this venture, Microsoft et al. will dump $2 billion into Cruise to make this dream a reality.

As a result, Cruise now has an estimated valuation of $30 billion. Now, you might think that $30 billion is peanuts compared to Tesla’s nearly $800 billion valuation … and you’re right.

Here’s the thing, though: Tesla has been so focused on production buildouts that it’s had little time to innovate. GM, meanwhile, has all the production capacity it needs already in place. All the Detroit darling needed to do was decide to make EVs. And it did so in a very big way.

But not only does GM have the production capacity, it also has a global distribution network right down to the dealership level. That alone is a massive advantage once GM’s EVs start to hit the market.

That said, there’s a level of corporate boneheadedness that undermines GM’s rise to power in the EV market. Take this statement from Cruise CEO Dan Ammann, for instance:

Microsoft, as the gold standard in the trustworthy democratization of technology, will be a force multiplier for us as we commercialize our fleet of self-driving, all-electric, shared vehicles.

Trustworthy democratization of technology? Force Multiplier? Come on, Dan! That’s no way to energize your target demographic through synergistic witticisms.

Where are the memes!? Everyone knows that you need memes and outrageous antics to succeed in the EV market.

That’s how you reach an $800 billion valuation. Not by making some of the bestselling cars in American history. Not by partnering with blue-chip software companies that have proven market leadership over decades. Memes and rhetoric, man!

Sarcasm aside, GM doesn’t need to beat Tesla at hype or even at innovation. It just needs to produce an affordable Everyman EV, just like it did when it made gas-powered cars. If it can do that, it will indeed trample Tesla underfoot. 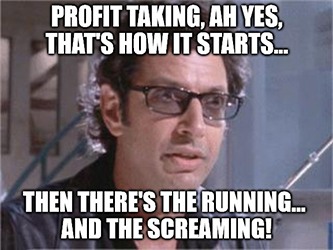 Goldman Sachs (NYSE: GS) was the biggest story on Wall Street today, which is surprising since no one likes financial stocks right now.

They’re just too boring in this age of social media and memes (see above).

But, while Goldman Sachs may not tilt the Millennial market anytime soon, it did post blowout fourth-quarter financial results.

Goldman had one big advantage in 2020 that allowed it to outperform: It didn’t have to load up on loan-loss reserves.

You see, Goldman isn’t the big lender that Bank of America is. Or Citigroup, for that matter. As such, it put that capital toward trading and deal-making (think IPOs) during the pandemic.

Wake up! I know you’re snoozing.

This part is important: GS started the day up more than 3% on the news but fell into negative territory by the close. And it wasn’t because GS is as boring an investment as it is a company. It’s because of profit-taking.

It may come as a surprise, but GS is up more than 56% since October. That’s a massive move for an old, stodgy banking stock. Combine that with the shares bumping into psychological resistance at $300, and today’s pullback is no surprise.

That said, GS won’t stay below $300 for long … and if you’re looking to add a solid financial stock to your portfolio, you can’t go wrong with Goldman Sachs. 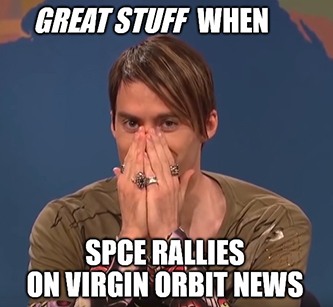 Like many investors following the great space race, I got excited this weekend. Virgin Orbit successfully launched the LauncherOne rocket into orbit for the first time on Sunday.

I thought: “Finally! Virgin officially reached space!” I also thought a few other things that I can’t publish here in good conscience … but you get the idea.

Furthermore, Susquehanna had some sobering news for SPCE space cadets today: It downgraded the stock from positive to neutral with a price target of $32 — roughly a 5% discount to Friday’s close.

And if that wasn’t enough, Mubadala Investment, one of Virgin’s biggest shareholders, reduced its stake by 26%, or 3.1 million shares.

Naturally, investors focused on the Virgin Orbit news, sending SPCE up more than 5% in early trading. But, as the realization set in, SPCE fell back to earth.

As I’ve said before, Virgin Galactic remains one of the worst investments in the space market right now. It’s all hype and no return — two tastes that decidedly don’t taste great together. 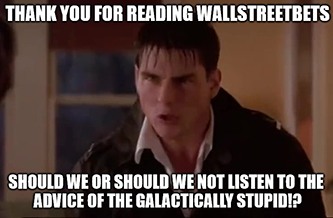 GME rallied more than 20% to hit another 52-week high today.

Why? Hype, speculation and WallStreetBets. At this point, I can’t help but laugh.

I mean, what’s left to say about GameStop?

Sales fell 3.1% during the holiday shopping season, despite a flood of new games and two new video game consoles. The company blamed the “evolving impact of COVID-19,” but anyone can see the writing on the wall.

Video game sales are going digital. This isn’t something that Chewy (NYSE: CHWY) co-founder Ryan Cohen and his cohorts can magically fix just by joining GameStop’s board. This isn’t a problem Cohen faced at Chewy.

GameStop isn’t staring down just one major competitor (PetSmart, in Chewy’s case). It’s taking on every single major retailer on the planet. Furthermore, the company also faces a paradigm shift in the way we buy and play video games. I mean, pet food and pet supplies didn’t suddenly go digital.

So why’s GME still rising? Again … hype, speculation and WallStreetBets. This rally is entirely due to retail speculation forcing short-sellers to capitulate. It’s certainly not institutional traders bidding up the shares — they only hold about 2.5% of GME.

What I’m trying to say is that you shouldn’t chase GME’s rally. Don’t succumb to FOMO. It only ends in tears … and laughter from a particularly interesting group of online retail investors who delight in huge losses just as much as mooning wins.

If you feel a rush of excitement over banking revenues or those oh-so-profitable insurance premiums … you’re in for a treat. Welcome, Great Ones, to banking and insurance week in the Earnings Extravaganza!

We already mentioned Goldman Sachs raising the bar for other big-boy banks, just like how JPMorgan Chase (NYSE: JPM) left the gate at full speed with last week’s brilliant report. But from First Hawaiian (Nasdaq: FHB) to First Internet Bancorp (Nasdaq: INBK), all the small fry across the financial fields finally have their week in the spotlight.

And for the rest of this banking bunch, it’s anyone’s game. Here’s a glance at this week’s earnings, courtesy of Earnings Whispers on Twitter. Would you just look at aaaaaaall those banks! 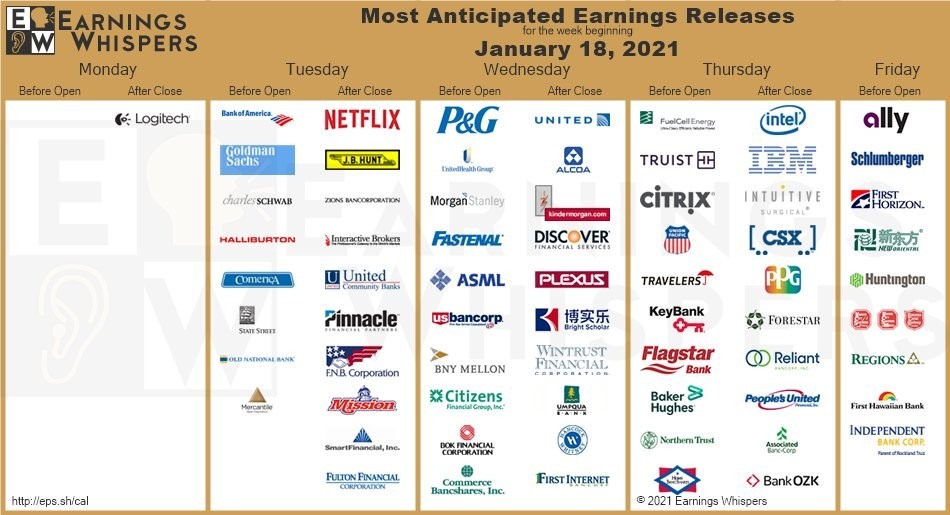 Morgan Stanley (NYSE: MS) and Regions Financial (NYSE: RF) are the other two biggest financial names set to report this week, covering both the trade-heavy and retail banking fronts. Somewhere in the din of the financial fugue lies Discover Financial Services (NYSE: DFS), which is our next look at the ever-evolving credit situation.

We talked about banks ready for a potential looming “loan a geddon” — and then releasing said backup funds, thanks again to JPMorgan — but how much does Discover have prepped for defaults?

Are people spending above their means? How much is credit usage changing by this point in the pandemic? Who’s buying all this vinyl that keeps showing up at my door? I want answers.

But, in the interest of steering our conversation away from the financial stock doldrums, here’s what else is going on this week!

Most of Main Street traders’ eyes (naturally) go to Netflix (Nasdaq: NFLX). Its report probably hit the newswires around the time you got this issue … which is why we’re talking up credit stocks instead of Netflix’s subscriber numbers today.

Those key figures will continue to be the hot-button topic for Netflix going forward — especially after a year when virtually everyone launched their own “Streaming+” service. And after Disney’s recent deluge of content plans, Netflix has to pack a pile-driver of an earnings report to keep investors’ excitement going.

In other tech news, Team Blue is here with Intel (Nasdaq: INTC) and IBM (NYSE: IBM), both set to report on Thursday. Intel’s report will be CEO Bob Swan’s swan song in terms of financial reports.

And you know what? Everything will be fine. Intel’s foray into a post-Swan era has yet to make its dent on earnings, but it won’t be long before the company’s waning exposure to manufacturing starts to benefit Intel’s bottom line. For you INTC hodlers in Great Stuff Picks, we’re not calling this a comeback!

Then there’s IBM, which is likely to peter along with nothing new or noteworthy, as usual. You still doing stuff with the cloud? Yeah? Carry on.

Finally, you might think I’m hyped up for the lone hydrogen stock hiding out there on Thursday — Fuel Cell Energy (Nasdaq: FCEL) — but alas, nay nay.

FCEL stock made our list o’ shame late last year, and my mind hasn’t changed on the stock — or its limited runway for growth in the hydrogen power space. But I’d take new energy earnings over the banking horde any day…

Great Stuff: Sir, This Is a Casino…

Welcome to another week with us, Great Ones! I’m glad you’re here: You’re just in time to share your take on these heady market climes with us.

Your thoughts, rants and hot takes about the market are what we crave. And Thursday’s the day when we rummage ‘round our inbox and gather the Greatness to share with you. And if you’ve never written to us before, by all means, we’ll get the conversation started right now:

GreatStuffToday@BanyanHill.com is where you can write to us night or day — this is email, after all. Though let us know if you’d like to keep your email on the down-low, you hear? We don’t want to go around sharing your juicy trading secrets — just let us know. 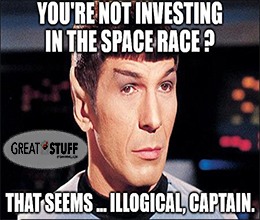 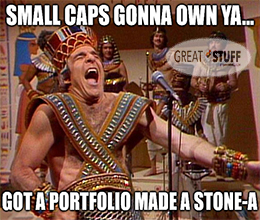