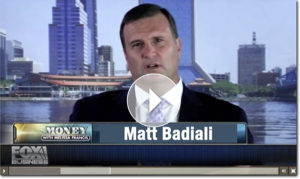 His research has taken him around the world, from Singapore … to the Yukon … to Iraq … to Hong Kong … to Papau New Ginea … to the Mexican desert.

He’s taught geology at Duke University and the University of North Carolina. He’s presented his findings at major geologic conferences, as well as to companies like Anadarko and Exxon Mobil.

And he’s always meeting with mining company CEOs, resource investors and precious metals experts to stay in the know on the latest technologies, discoveries and trends.

And there’s a good chance you’ve seen him on one of the financial programs. 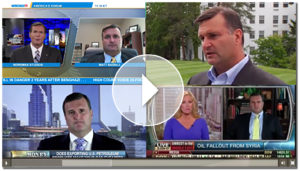 Just last week, Matt posted a video on his private website for his readers.

In it, Matt reveals the shocking details on a “magical” metal  that’s disappearing, his secret to showing his readers 2,178% cumulative returns and how he is now using this secret to help Main Street Americans make similar gains.

Indeed, the video shows how Matt helped a guy named Keith Higley make a lot of money. Keith wrote in to say: “I have made approximately $60,000 to $70,000. Easily the best investment I’ve ever made … “

And Nathan Goetz, a civil engineer, used Matt’s secret to bank over $1 million. As Nathan tells us: “I’m sitting on more than $1.6 MILLION thanks to this secret. This is a long-term investment that I’m not touching.”

Most shocking of all, in the new video Matt reveals his biggest investment prediction of his decorated career.

Its supply is diminishing so quickly that the United States Geological Survey recently concluded that there’s only enough reserves of this metal left to last 15 more years. That’s especially frightening when you consider demand could outpace supply by as much as 900%

That’s why experts are warning that we are about to see the largest shortage in decades … and that the “world is running out.”

“This metal will become the most fought-over, and sought-after, commodity on the planet,” he says in the video. “More than land, more than water, more than gold and more than oil.”

However, there may be a solution buried behind these trees (photo below) … out there in the distance by the lake. That’s where a small group of exploration geologists have struck the mother lode. It’s the first major deposit of this scarce metal discovered in decades, and perhaps the last.

This one deposit is so big it could solve the shortage crisis.

This discovery could be worth hundreds of billions …

And this is where you come in.

Right now, there is a limited time to invest in the company that discovered this deposit for as little as $50 … and give your money the chance to grow as much as 30-fold.

I urge you to take a few minutes to learn Matt’s secret to stock market riches and to get his next recommendation right away … Click here to watch it now.