This is without a doubt the biggest opportunity in a lifetime.

The First Industrial Revolution – in the 18th and 19th centuries – saw the U.S. starting the shift from an agrarian to an industrial economy.

Hot on its heels was the Second Industrial Revolution. That ushered in the telephone, light bulb and internal combustion engine. Also the rise of captains of industry and the robber barons. Think Rockefeller, Carnegie and J.P. Morgan.

The Third Industrial Revolution saw technology advance from analog to digital. It started in the ’80s and is still going strong.

Untold BILLIONS have been made. So far. For example:

Today we’re at the dawn of an entirely new era … the Fourth Industrial Revolution.

The fortunes that will be made could easily dwarf all of the others. 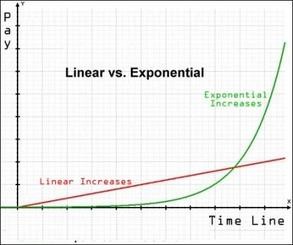 According to Klaus Schwab, executive chairman of the World Economic Forum, this latest revolution will be nothing like the ones before it.

Because, unlike the previous industrial revolutions, this one isn’t growing in a linear pattern.

Barclays agrees: “It is hard to find a historical precedent for the velocity and scope of these breakthroughs.”

And HSBC confirms that “it’s certainly a phenomenon that investors shouldn’t ignore.”

This new age is not so much about technological advancement as it is about communication and connectivity.

I’m not just talking about artificial intelligence (AI) or the Internet of Things.

It encompasses every major innovation:

But all of it is hinging on just one technology.

According to the World Economic Forum, this very technology “will be as revolutionary as electricity or the automobile, benefitting entire economies and entire societies.”

That’s why recently, the White House sent out a new directive to speed up the rollout of this new technology.

“America must be first,” it reads.

Our government doesn’t want China, Russia or any other country to beat us.

Because, as the memo states: It will “unleash innovation,” and there will be “insatiable demand” for it.

Forbes says: “[It] will revolutionize America, driving new service and industries. For investors, this is a huge opportunity.”

In this viral video, former hedge manager and one of America’s top traders, Ian King, lays out the details.

To see it, simply click the play button below or go here now.